hue is a wireless, app-controlled lighting solution with the so-called bridge as a central element. The bridge is connected to the router and communicates wirelessly with up to 50 LED light sources, which can be dimmed, switched on and off and - depending on the model - be changed in light colour.

With output commands the following functions can be controlled: 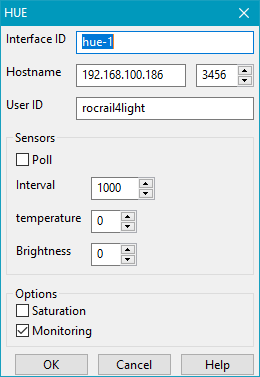 Only the Hostname/IP-Address and the User ID are used.

The ID to reference this library for Output objects and Programming the UserID.

Note: This will be the ClientKey after programming the UserID.
The UserID to use for command send to the bridge.
If the UserID does not yet exist it must be Programmed.

Time in ms between the poll queries.

Sensor address for be used as model temperature.
Only needed in case of multiple temperature sensors.

Sensor address for be used as model light level.
Only needed in case of multiple light level sensors.

Some lamp types will show a short flash if the saturation value is also send.
Default: Deactivated.

If deactivated, no Trace messages will be send.

Alternativ: creating an UserID in the Hue Bridge

Take a look at this link, if you want create the UserID directly on the Hue Bridge:
https://developers.meethue.com/documentation/getting-started

With the following http link the Bridge can be found:
https://www.meethue.com/api/nupnp
The browser should show you something like this:

The internalipaddress can be used as Hostname in the setup dialog. 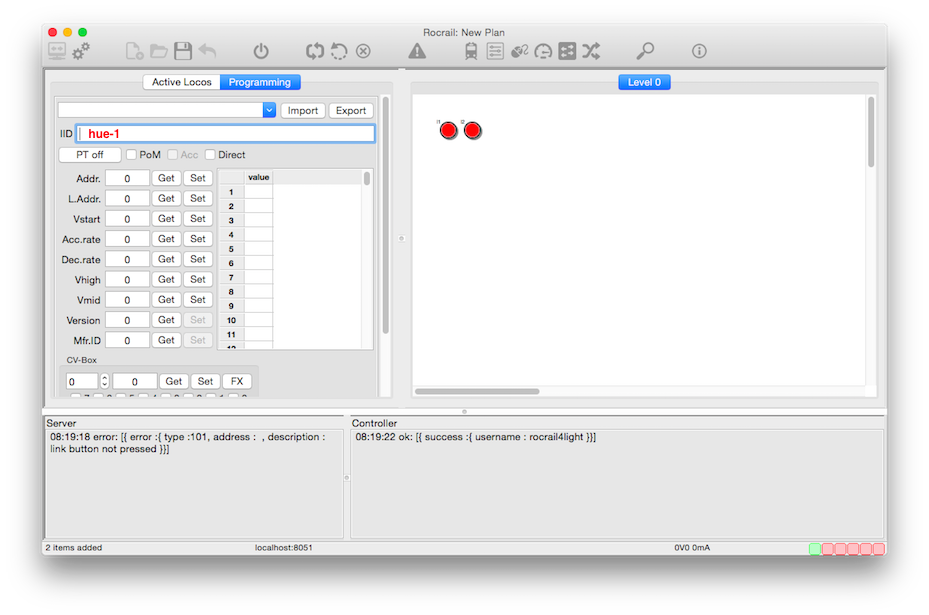 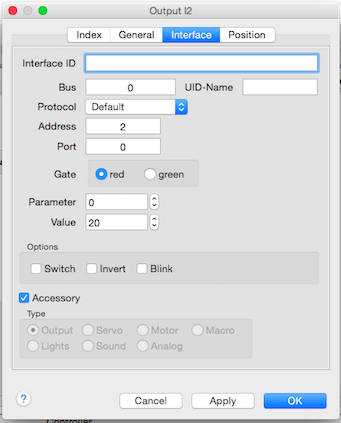 The Interface ID of the HUE library.

The parameter is used to set the Hue of the light if set greater then zero.
Not all light types, like LUX, do support this option and will report a parameter error.

Activates the alert effect "lselect"; The light is performing breathe cycles for 30 seconds.

The control in HUE is type independent but recommended is to use type "Light" for advanced rendering in Rocview.

The "Iris" size depends on the brightness of the lamp if output type is set to light or backlight.
Make sure the Render Smooth option is active.

Rocrail is listed here under Software:

Other links of interest: