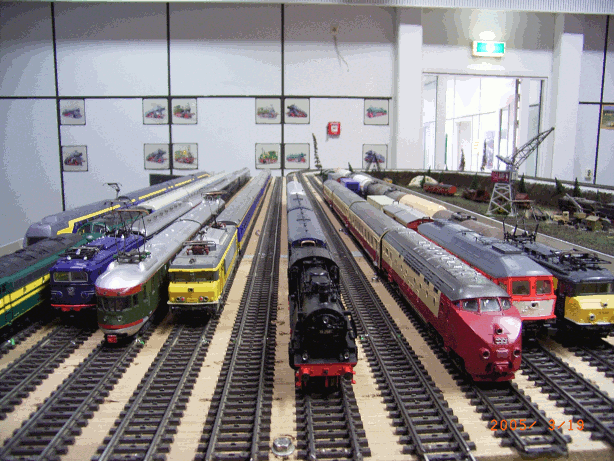 The fiddle yard in clubhouse MGV at the open day 2005

Though no longer in my posession, this Fiddel yard is still used inside MGV in Venlo, NL.
It is used in a 2 rail HO scale system, also running with RocraIL.
I am no longer connected to MGV, since I moved to Deventer.

The use of a shadow station is very common.
It provides the possibility of using more trains on a layout which is actually to small to show all of them.
It gives the spectator a very much interesting view, seeing different trains to pass.
However, a shadow station, needs a lot of space.
In that perspective, this fiddle yard is a fantastic solution.
The amount of space that is reduced, is of course very much depending on the amount of used tracks.

What is a fiddle yard.?

It is no more than a flat surface, with as many straight tracks as desired, very close together.
Much closer than normally possible, since no curves and turnouts are used on the fiddle yard itself.
On HO scale the distance could be reduced to 40 mm centre tot centre.
This alone already saves a lot of space.
The fiddle yard will be able to move sidewards. Usually one track one each side provides the trains to roll on
and roll off the fiddle yard. More connections are of course also possible.
The practical example of what is to be explained here, is a fiddle yard with 12 tracks, each 2m length.
It has been constructed many years ago, and is controlled manual or with computer and Rocrail.
Since there was no special command in the previous used program, the fiddle yard was originally equipped with
three turnout decoders, to simulate 22 turnouts, and controlled as a shadow station with 12 tracks.
Now, with Rocrail, it is on screen visible as fiddle yard, and also special controls are enabled by Rob Versluis,
making things much easier.
The commands from Rocrail from and to fiddle yard are given by use of LNet.
The width of the fiddle yard, including the sidewards space that is needed to move, is approx 1m.
So on a surface of 1 x 2 m there are 12 x 2 = 24 meters of rails!
Twelve trains of up to approx. 1.9 mtr length each will find a place on it.
To construct a fiddle yard, there are 6 important items to be taken care for.
Each item will be discussed separately. 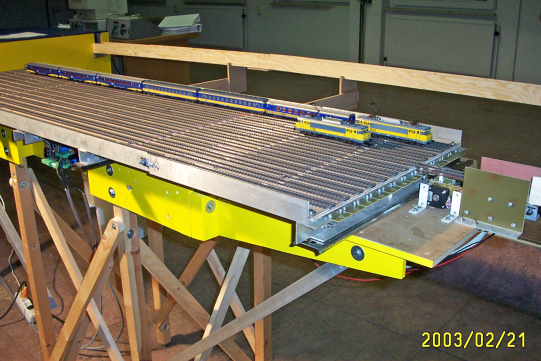 The first idea was to use a stepper motor, and that is now adays standard.
But this old version was used a normal motor with reduction gear box.
With the large load of trains and the 12 or 16 tracks, all together there is a sincere weight to be moved.
A great advantage of using stepper motor is that actual position of selection table can be determined out of the amount
of steps that are taken by the motor. As long as no obstruction in the movement is on hand, the position is accurate.
Now there is a standard contyroller for that , see GCA145.
Here we proc3eed with explanation of linear drive.
The selection table that I constructed here, needed some more force, for various reasons.
The whole selection table is part of a module system. Several times a year these modules were transported in trucks to show it to the public, somewhere in of outside Holland.
Specially this was a difficult situation and required a very rigid construction, which made the selection table rather heavy.
There fore I choose the solution with a normal motor with gear box. Sold by Conrad (Modelcraft 227560).
This motor is provided with a gear wheel driving a gear strip which is mounted under the track board.
The electronic control makes it possible to slowly start the motor and increase speed when the desired position is more than one track away.
Close to the target, the motor slows down again, making the whole movement very smooth.

Some small modifications had to be made to adapt the sliders to my needs.

The result was a straight and smooth sliding track board.

Why such heavy equipment?

The moving part of the selection table, including all electronic parts, the wood, the sliders etc. comes close to 9 kg. When fully loaded with 12 complete trains (all Märklin) , specially when old steam engines and metal carriages are used, comes close to 15a 16 kg. All together some 25 kg to move, without unwanted margins. A solid drawer slider was absolutely not overdone!

When sliding the tracks, the motor needs information on where to stop. This is done by four bits with optocouplers CNY70 positioned on the non moving base of the frame, and a reflection board right on top of it, mounted under the moving part. This reflection board, made of cupper layer Pcboard, is cut out in such a way, that a binary code is provided. To be sure that no misunderstanding can be made about the position (by change of position not all changes of bits come together) I used a so called 'Gray code'. Though this is binary also, it is made so that between any two neighbour positions, only one bit is different. This code , detected by optocouplers, is transferred to control board by use of I2C. This will be explained in chapter 4.

An example of a gray code

The gray code in real form

I did not like to take the whole selection table in to pieces, just for making a picture, so this is approximate about 5/12 of the whole plate.

The control of the selection table has several inputs and outputs.

b) output for position display

The board is provided with two integrated LocoIo modules.

This enables 12 outputs for 12 turnouts, 6 bits for position feed-back and various control bits 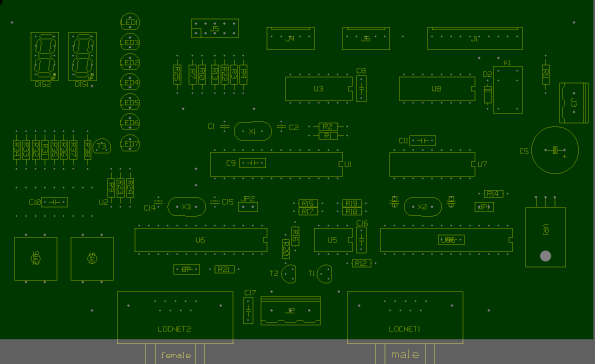 The electronic heart of the selection table.

Feedback is needed to inform Rocrail about actual position and more important the signal "I have stopped in right position". Four bits are used for the actual position. This will be enough for 12 positions available. After the selection table has moved and has come to stop again, one bit will inform Rocrail. These bits are programmed in LocoIo chip as input and therefore been sent through LocoNet. Anywhere in the Loconet, these bits can been seen as block detection signals. This enables to create a display unit, decoding the four position bits to a 2 x 7 segment displays. Another feature is the extra safety possibility, used in a peace of track towards the selection table, to switch off the rail power to that track and to the selection table while it is not in postion. This is also very handy when trains are running in manual mode, so no one can abusively run trains from and to the selection table when it is moving.

In normal situation , this latch will be something overdone. Also a f.y. driven by a suitable stepper motor can be stopped on the exact place, not needing any complicated latch to keep it in position.

This selection table is driven by a normal motor with gear/box, so stopping in an exact place has to be achieved in an other way.

Also, I installed this because this selection table has been shown on various shows.

The crowded spectators have no consideration with the fact that a large set-up as ours is sensitive to touching. The selection table sometimes went a little bit out of position, when people in their enthusiasm bump in to the set-up. Normally, at home, a selection table is easy to stabilise to walls or floor, giving it a nice and stable position, but in exposition buildings , that is no option.

When to selection table starts moving, the pin will be pulled out of the hole, freeing the sliding action.

When the desired position is almost reached, which information comes from the positioning sensor (see point 3), the pin will be loosened, and thus sliding against the strip with the holes.

When the pin latches into the hole that passes by, a switch on that pin will immediately stop the motor, and inform the central control that the latch is set.

The position is reached.

The latch in reality

The pin is moved to the left by a -not visable- motor and a lever at the bottom.

When close to desired position, the motor shifts the pin to the right.

When the exact position is reached, the pin shoots in a hole and the micro switch at the rear end of the pin powers off the sliding motor and short circuit it.

Because the motor was already running low speed, the immediate stop does not give any problems with the trains, but makes sure the exact position is guaranteed.