The Rocrail Server will look for images in the following path:

andRoc 2 does not come with embedded symbol images, but request SVG symbols from the Rocrail Server.
The Server will look up symbols in the same paths as for RocWeb:

RocWeb does not have to be activated for looking up SVG symbols, but the SVG paths should be correct; Check it. 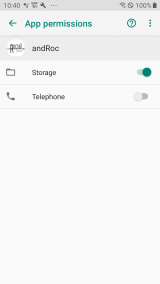 The andRoc App must be have Storage Permission to be able to save the SVG symbols on the Android device.
The telephone permission is optional, and is only needed if the phone number should be used as Throttle ID. 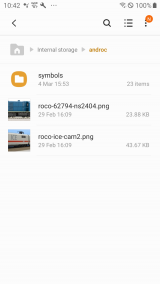 The directory "androc/symbols" must be deleted in case another SVG Theme should be used.
Note: Starting with Android 11 the data directories are hidden. Use the App Info to delete the symbols and images: 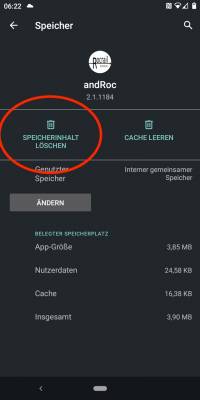 When andRoc starts, the connection dialog is opened. If a Rocrail Server is found by R2RNet it will be shown in the first field.

After connecting the Rocrail server a dialog shows the progress of loading the plan.
The last host:port combination is saved for the next session.

Points to check if the plan does not load:
- Is the WLAN of the mobile device connected?
- In case of meetings with several users: Is there a restriction of the maximal number of devices by the router of the home-network?
- Can the hostname be resolved in the home-network?
- Is the IP-address correct?

The plan title of the Rocrail server which did announce itself over R2RNet.
Otherwise, the title is left empty.

The IP address or computer name of the target Rocrail server.
The dialog in Menu → Help → Info of the Rocview-Client will show the current IP adress.
For ease of use, a fixed IP address may be allocated to the Rocrail-Server in the home-network.

The client port of the Rocrail server. Default 8051.

The Control and Slave code.

Select one of the previous connected Rocrail server from the list.

The main menu can be opened by clicking on the three points in the upper right corner of the track layout. 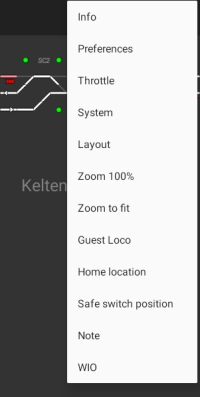 Info: Information about Copyright, license, Version, Throttle ID and so on are listed up on this view.
Preferences
Throttle
System
Layout
Zoom 100%: Restores the zoom factor of the layout-view to 100%
Guest-Loco
WIO

When no loco ist set in the block, some buttons are greyed out.
A short click on the Rocrail logo image opens the loco selection to set a loco in the empty block.
A long click opens the loco setup (CV-Programming).

Chose a schedule for the loco.

Chose a target block for the loco.

A dropdown-list to chose a train for the loco.
After this, the assign button has to be pressed.

A short click assigns the train from the dropdown-list to the loco.
A long click releases the train.
The red dot on the button shows, that there is already a train assigned to the loco.

As long, as the auto-mode is turned off, the start button will be grayed out.
A click on the start-button starts the loco in automode.
A click on stop will stop the automode after the loco reaches the next block.

Starts the loco in half automatic mode

Swap the logical placing of the loco.

Swap the Block Enter Side.

Set the block to the Open or Closed state.

This option needs a restart of andRoc to get active.

Use this option with care because this requires a lot of processing power on small devices and can block the user interface of andRoc.
Leave it off for normal use.

Prevent the device of going into sleep mode.

Switch directly to module view in case the loaded plan is modular.

Option for large displays to keep the throttle dialog small.

Do not use this option on small devices.

Start the throttle after starting up andRoc.
Only available with a valid Rocrail support key.

Show loco image in the block

Show loco image in block instead of text.

All Road names found in loco definitions are listed as category.
If a loco or car has no Road name set it will be added in the "None" list.

Use power off instead of emergency break.

Use all speed steps

Option for decoders with 127/128 speed steps to set the slider resolution 1:1.
Starting with version 439 this option will be ignored incase the throttle controls a consist to avoid Command Station overload. (Multi-headed train)

Use buttons instead of speed slider. Auto repeat after 1 second.

Allows activate/deactivate the sensors in the layout by a click in order to simulate them.

If activated, switches will change color if they are in an active route.

Priority for routes over block occupation in the track layout.

If Ping is activated andRoc will send every 2.5 seconds a ping to the loco controlled in the throttle.
If the ping will not come within 5 seconds the Rocrail server regarded the andRoc connection as broken and will stop the loco immediately to prevent accidents.
Deactivate this option in case multiple locos are controlled.

If not using all speed steps this number is used for in- and decreasing the speed.

If a Rocrail server has R2RNet activated it will provide its client connection information by multi casting to the andRoc clients.
Default: 224.0.1.20:8051

The first line under the Loco image shows the ID and between brackets the automatic mode.
If the selected loco is in a block, or moving from one to another, this will also be shown on this line.
If the automatic mode is idle or wait the background of this line will turn to red. Otherwise it will be green.

Release a loco from this throttle.
Without releasing a loco from a throttle it is not possible to control it by another throttle/client. This behavior can be manipulated by disable steal loco control.
A long click will send a power off command.

Function group selection button. There are three groups of 14 function buttons available.
A long click will send an emergency break.

Toggle the locomotive lights on/off.
A long click will dispatch the selected locomotive for use with a Fred.

Stops the loco and flips the current driving direction.
The button also shows the current speed.
A long click will activate the Consist management.

While the shift-button is active, a click on the loco image will open a selection menu for the train.
In this menu a single car can be chosen to control his individual functions.
By selecting the loco image in the selection menu for the train, the functions of the whole train are activated again.
Starting with version 2.1.1132 the name of an individually selected car is shown in square brackets after the train name in the loco throttle.
If the functions for the whole train are active, only the train name is shown.

Velocity commands are send if the delta is 5 or at move end.
The delta is introduced to reduce the amount of commands triggered by changing the bar position.

Uses the speed presets (Vmin, Vmid, Vcruise, Vmax) from the Loco preferences.
Vmax will only operate on a long clock!

Adjust the velocity in all running modes including automatic.
These are the values in Rocrail, does not affect the CVs (see next paragraph).

Dispatch the loco for a throttle like the LocoNet Fred(i). 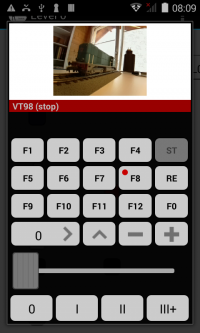 MJPEG TCP CAM streams are supported in the throttle. (2.1.1188+)
If set on the loco interface tab, the loco image will be replaced with a small WEB viewer.
The streaming host must provide the index.html entrance.
Scaling the MJPEG in the throttle can be done in the Preferences. 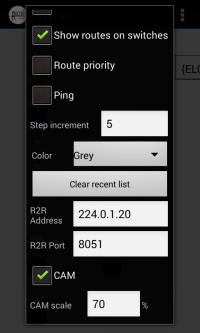 Note 1: A long click on the viewer is needed to select another loco in the throttle.
Note 2: Proprietary UDP streaming is not supported; The stream must be WEB Browser compatible. 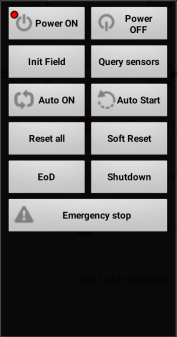 Power ON / Power OFF

Turns track-power ON or OFF.
A red dot in the button shows the current state.

Query all the sensors.

Start all trains in automatic mode.
Has to be confirmed in the poup dialog.

Removes the ALL locos from their blocks and sets all routes to free.
Has to be confirmed.

All the routes are set to free, but the locos stay in their blocks.
Has to be confirmed.

Shutdown the Rocrail Server if its not in console mode and Rocweb is not in slave mode.
This action needs a confirmation.

A list of all available ZLevels.
This list will not appear when only one ZLevel is defined for the current layout.
The first entry in the list is the "modview" visualization if the plan is a modular layout. 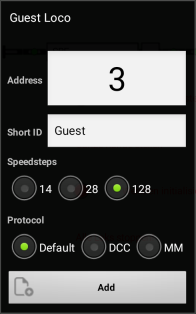 Add a → Guest Loco by address.
The new guest loco will appear in the loco category "Special". In case of sorting by roadnames, it will appear in "none".
The default is DCC and 128 speed steps if only the address is set. In this case the loco ID will be the same as the address.

Query all WIOs which are online, and show important measurements: 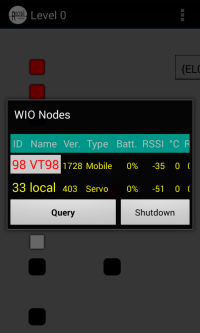 Shutdown/Deepsleep the selected node.
A long click will shutdown/deepsleep all nodes.
Only one node can be selected. A new query is needed to correct the selection. 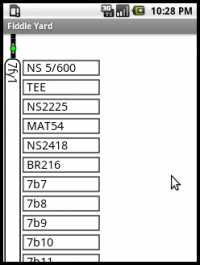 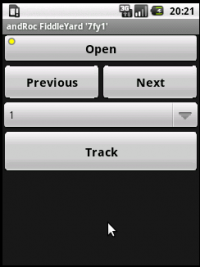 Touching the FY will open a new view for controlling it.

Opens or closes this fiddle yard for trains.

Move the table to the next/previous track.

Move to the selected track. 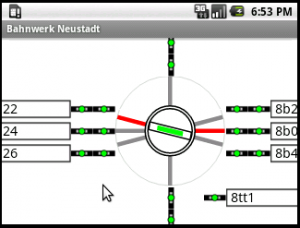 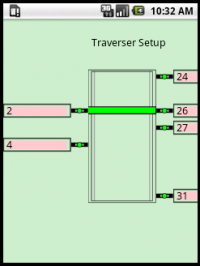 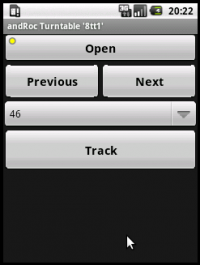 Touching the TT will open a new view for controlling it.

Opens or closes this turntable for locomotives.

Move the bridge to the next/previous track.

Move to the selected track.

The Loco Control Activity in case if the block is reserved.

Plan does (partial) not load

Check the plan if it is XML well formed with the local WEB Browser.
Rocrail and Rocview are using the Rocs parser which is not so strict as the Java one.

The Loco images and function icons are stored locally on the SD card. ("/sdcard/androc/")
They must be deleted manually in case new versions are provided by the Rocrail server.

Loco image does not show

Imagenames are case sensitive under Android.

Report it in the Rocrail andRoc Forum with following information:

Try this: Switch To The Stock Android Interface.

Disable "Mobile Data" to avoid Android devices to switch automatically from WiFi to G4 in case the signal gets poor.
Some devices do switch very/too soon to G4 under certain conditions.
Note: This is very important in case of outdoor use.
Alternative: Switch on 'Airplane' mode, and then switch on WiFi.