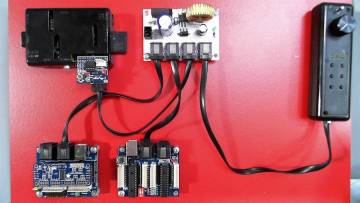 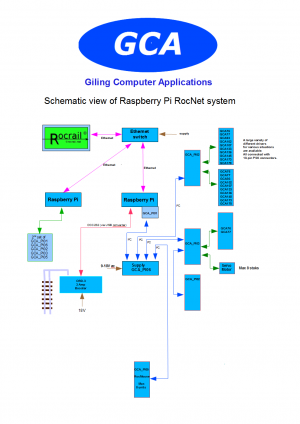 The overview in better resolution

The RocNetNode with its boards is a complete DIY Control System based on commonly used hardware standards.
It can be used for controlling:

The popular 'credit-card-sized' computer is used as base of the RocNetNode.
Both Model B and B+ are supported.
It can be used as software command station too, using DCC232 or SPROG.
“Raspberry Pi" is a trademark of the Raspberry Pi Foundation.

The interface between the Raspberry Pi and the I2C bus.

32 programmable I/O ports with MACRO support for signal aspects.
It is compatible with all GCA interface boards.
The GCA-107 Multi purpose Relay board can be used for frog polarization.

16 PWM ports for controlling servos, LEDs…
The GCA77 can be connected for max 24V 500 mA dc per port.
Even higher values in dc are possible with GCA76
Both buffer boards are each able of dimming 8 independent outputs.

A hand held throttle with 28 functions at hand.

All boards are accepting RJ45 and/or RJ12 connectors.
The RJ45 connector can be used with CAT-5 patch cables.
The RJ12 compatible cables are commonly used by Digitrax LocoNet® and Lenz Xpressnet systems. 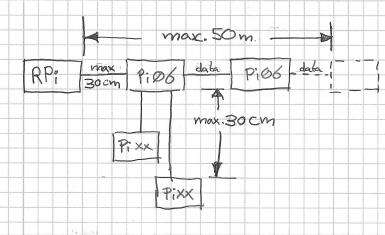 The data cable should not be connected to the 5V+.

A very comfortable Configuration utility is provided in Rocrail.
Updating a RocNetNode is done with just a single mouse click.

The addressing is linear: FADA
Only the Bus(ID) and the Address(RasPi Port) fields are used.