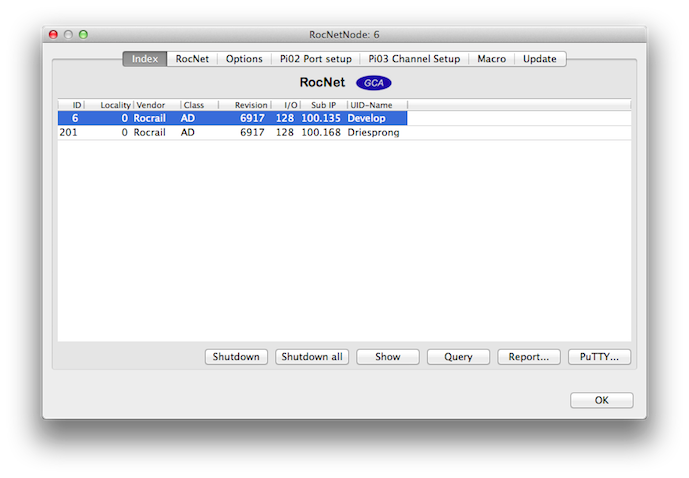 Node selection to be modified.
The list is automatically sorted on ID.

The RocNet-ID of the node.

Optional locality ID. Possible use with modular layouts to group the nodes.
This locality is not part of the addressing scheme.

The Sub IP address are the last two numbers of the network IP address: xxx.xxx.subipH.subipL.
This Sub IP will be randomly generated in case the retrieval of the IP address did fail on the Raspberry Pi.

Shutdown all nodes in the network.

Triggers the LED2 on the GCA-Pi01 to flash or stop flashing after the second show command.

Query all available nodes in the network.
Normally this is done automatically, but in case of a second Rocrail server in the same network it can be of use.

The Reporting option requires a file name which must be specified by dialog. The file format is CSV and can be read and manipulated by most spreadsheet programs. 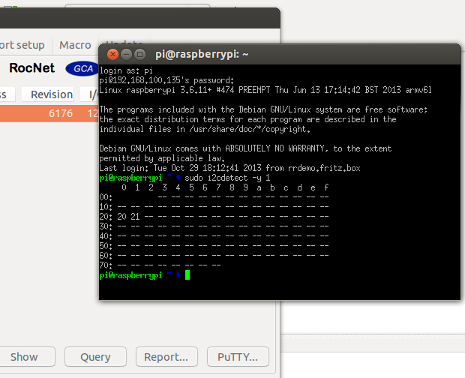 Opens a PuTTY terminal, ssh, connected to the selected RocNetNode for maintenance. (For Linux admins only.)
IP-Adresss = 192.168. plus RocNetNode Sub-IP.
PuTTY must have been installed, Linux/Windows, and callable.1) 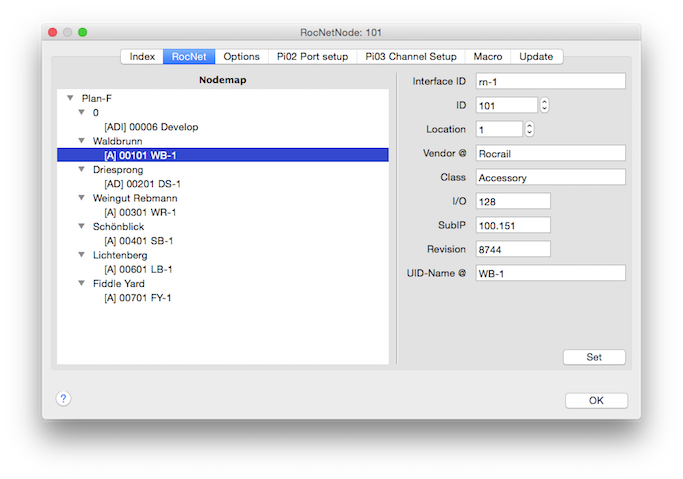 The optional locality ID is mapped with the layout Track Panels.
The plan title is used as root node label.
Context menu on nodes:

Context menu on the root:

The RocNet ID of the Node which can be modified and written to the Node.
This ID is part of the addressing scheme and should be used as 'Bus' on interface tabs: See Addressing
Initially this ID is set to 65535 which will trigger the host software, like Rocrail, to set a new unused ID automatically.
To avoid assigning double IDs the SubIP is also part of this procedure and makes it possible to add multiple '65535' nodes at the same time.

This is the optional symbolic name of the RocNet-ID which can be used to address this Node.

Set the new RocNet ID to the Node.
The Node will send a shutdown event and will try to identify with the new ID. 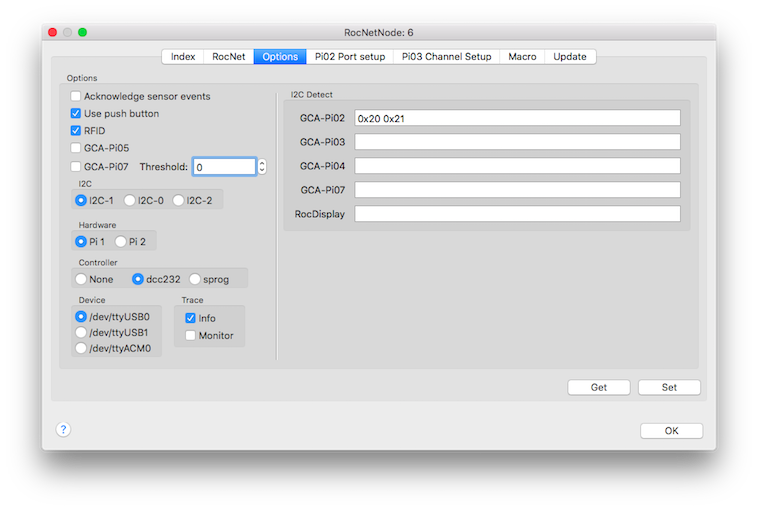 The host must acknowledge all sensor events within 500ms.
After this timeout the node will repeat the event. Max. retries is 10.

In case the GCA-Pi01 is connected the push button can be activated by this option for show and shutdown actions.

This option disables the RocMouse, GCA-Pi04, because they share the same I2C address range. (0x48-0x4F)
The used offset for reporting is 129 to avoid collisions with sensors reported by the GCA-Pi02.

The minimal measured value for reporting a sensor as occupied.
This threshold value is also used to report again if the delta compared with the actual measurement is greater then the previous reported value for updating the load representation in Rocview.

For pinouts of headers P1 and P5 see http://elinux.org/RPi_Low-level_peripherals

The actual connected GCA-Pixx device addresses are listed.
If the Node was new and had become automatically a new ID it could be necessary to reboot it to see the values of the I2C Scan.

The Pi 1 and Pi 2/3 do have a different GPIO base address.
The correct setting is needed for the LEDs and button on the GCA-Pi01.
Type 'Others' is for experimental support for boards like the BananaPi; Do not use for Raspberry Pi.

USB device on which the DCC generator is connected.
For SPROG 3 and S-Nano select "/dev/ttyACM0".

The values are automatically read after selecting a node from the index.
Get/Set the options.

Ports on the GCA-Pi02 can be used for all GCA interfaces. 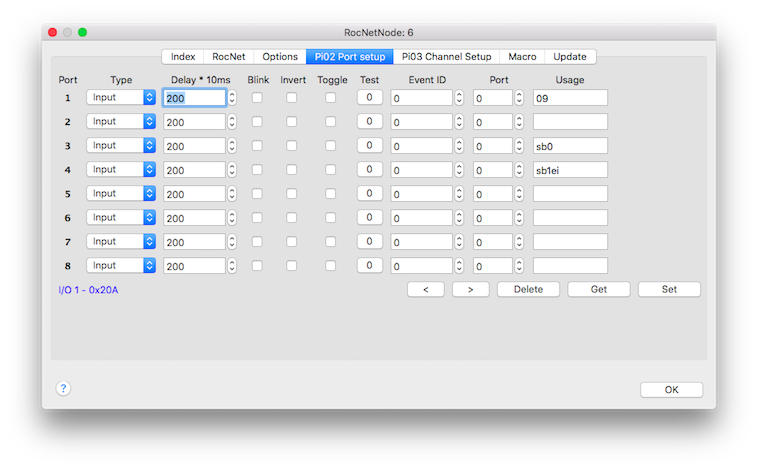 The port numbers are fixed because they are unique by the RocNet ID.

Every node has a fixed port range from 1 to 128.
See: GCA-Pi02 Address selection

Use the delay as interval for blinking.

An output will flip ON/OFF only at an ON command.

Test button for output type ports.
The real state is set in this button after a Get command.
The button label is for ON "1" and for OFF "0".

Shows the Rocrail object ID which is linked to this port.
A double click in this field will open the properties dialog of the listed object.

Get/Set the selected I/O group from the Node.
All 8 configurations are embedded in one data package.

Delete the 8 selected ports from the node setup.
This could be necessary in case the number of connected GCA-Pi02 has decreased. 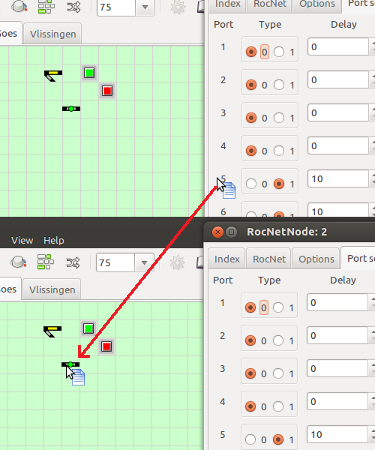 Drag a port number to a pre-existing layout object to set the object's bus and address after drop. 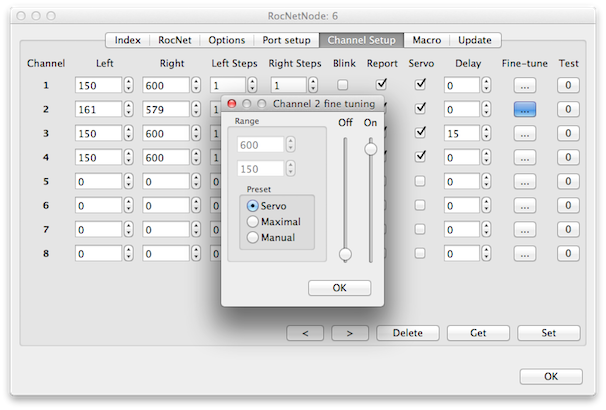 Every node has a fixed channel range from 1 to 128.
To address a channel instead of a port the port type servo must be set on the interface tab of switches and outputs.
See GCA-Pi03 Address selection

The number of steps to use every 10ms to travel to the wanted on/off position.
Zero will jump directly to the wanted position.
Advice: Increase this value and the delay if fine granularity is not needed, or does not add a visible effect, to save CPU power of the Raspberry Pi.

Flips to the other position after the wanted position is reached.

Reports if the wanted position has been reached.
This event can be used as switch feedback: Use field events.

This option will put a channel into "sleep mode" after reaching the desired position. What this does is deenergize the servo after it reaches it's final position thus permitting manual movement of the servo motor. See section 7.3.1 of the PCA9685 data sheet for more information. Some servos like ESU for example, automatically go into sleep mode, so this option has no effect. 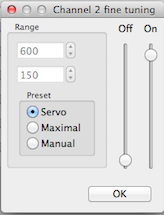 A thumb release will trigger setting the channel to the new value.

This toggle button can be used to send an output command to the channel for testing.

Shows the Rocrail object ID which is linked to this channel.
A double click in this field will open the properties dialog of the listed object.

Drag a channel number to a layout object to set the bus, address and port type after drop. 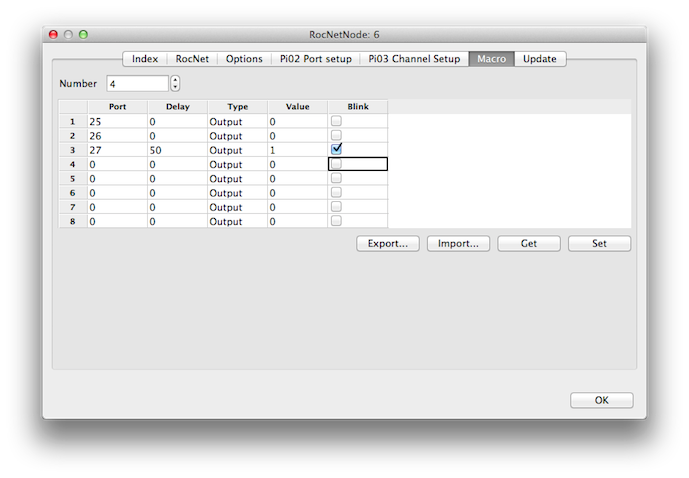 Macro numbers have no relation to port numbers.

Some Operating Systems require an enter before a new cell value is accepted in the table.
Without this enter the Set command will send the old value to the RocNetNode.

Macro number in the range between 1 and 128.

This will overwrite the port blink attribute.
The delay is used as interval.

Export/Import all eight macro lines into a file. 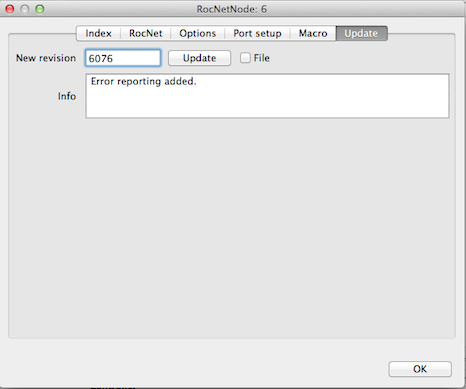 The button text, "Update" or "Poll", depends on the contents of the "New revision" field.
In case this field is empty the text will change to "Poll".

If the PC on which Rocview runs is connected to the Internet it can try to find out if a new revision is available and will display the new revision number and info.
There is probably no Internet connection possible if the button remains grayed out after a poll action.

Update to the new revision.
Check http://rocrail.net/software/rocrail-snapshot/ for the correct number.
No reboot needed, and these are the steps made automatically:

If the file option is checked the installer file must be copied manually in the Raspberry Pi /tmp directory before updating:

The default hostname of the Raspberry Pi is "raspberrypi" but could have been changed in the Raspberry Pi configuration menu.
Instead of using the terminal command "scp" other GUI programs can be used also like:

The /tmp directory is automatically cleaned up at (re)boot.

All configurations are saved in the rocnetnode.ini and can be copied to another computer for backup purpose.
The IP address can be easily composed with the Sub-IP of the RocNetNode.
The easiest way is to use a terminal with the secure copy command:

WinSCP or Filezilla can also be used with the SFTP protocol.

Before restoring the rocnetnode.ini the RocNetNode program has to be stopped to prevent overwriting the restored ini file.