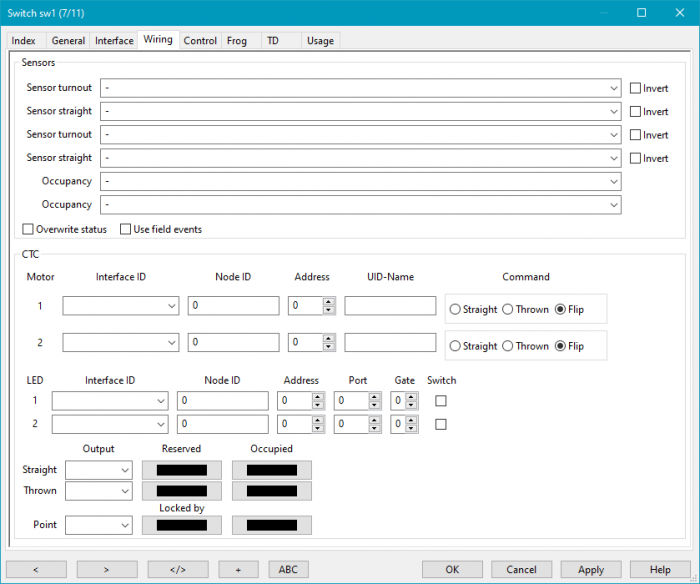 You can connect up to four sensors to the switch.
The second pair is used in combination with a second motor or coil.
The route activation will wait for the sensors, if defined. For slow motors it is recommended to use this feature to prevent running into a partially set switch.

All sensors can be selected by combo box where all previously defined sensors are listed. Select the dash "-" for deactivation.
The switch reports the position after receiving the right sensor events if sensors are set. This works also when the switch is set manually if the sensors are mechanically connected.

Checking this option will use the off sensor event. Use this if using hardware like GCA136 or CAN-GC6 which has one sensor for one servo; on means thrown.

These sensors are optional and are used for detecting electrical occupation to avoid setting this switch if one or both are high.
This will also prevent setting the switch in manual mode.

The sensor events will overwrite the current switch status and avoid red background in Rocview.

Use field events as position acknowledgement.

Note 1: This option is useless in case the Command Station Option "Echo commands" is set.
Note 2: If also sensors are defined for position events, both must be confirmed to be able to set a route over this switch. (2.1.1756+)

How to connect the sensor to your switch is mostly explained in the user manual of your sensor module. If the coil driver has end switches, it can be wired directly to the module. (opto-isolation is highly recommended) Some manufacturer's motor drivers have extra add-on switches to generate sensor inputs. Hoffmann is one example.

Before a train starts running all turnouts must have been set according the wanted position. The train waits until all sensors match the positions. At enter a running train will slow down to V_mid if not all turnouts are set, and will stop at in if it is still not set.

Turnout sensors effect in the GUI

A turnout symbol is set after receiving the sensor event. In the case of slow or prototypical servo's, it can take about 1 or 2 seconds.

These optional addresses are used to control the switch motors by CTC.
A coil with two electromagnets is regarded as one motor.
The setup is equal to the Sensor setup.
For more information see also:

Output addresses for controlling the leds on the CTC or switch panel to show the actual switch positions.
One output is used for each motor.

Selection of three outputs for the control of RGB-LEDs for the illumination of the three track legs of a turnout symbol in a control panel. Color support must be activated in the properties of the outputs.
Clicking the buttons opens a dialog for setting the color to be displayed.

The switch background is swapped to Red if the status does not match with the sensor report(s).

Use Init Field or flip the switch manually to update the status at startup.

The switch background is swapped to Light Red, the same color as from an occupied block, if it is locked and set.