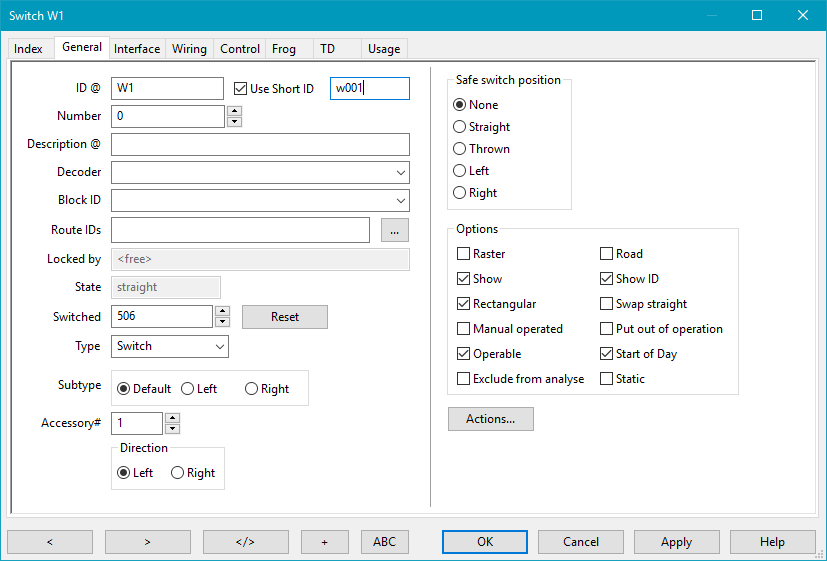 The ID is used through out the Rocrail program as unique key for referencing this turnout and is therefor very important. If you change the ID you will likely need to edit the defined routes.

The Short ID is used for showing this switch on a throttle display. It is free text and optional.
The checkbox must be set to enable transferring the short ID to a throttle for this switch.
Activate menu item "Control → Transmit Short IDs" to transfer all previous set Short IDs to a connected throttle.

Note: The transmission is processed together with the Short IDs of locomotives.

This number is used for mapping a switch command by address to this switch.
See WLANmaus for more details.

The predefined Decoder to which this switch object is connected.
With LAN decoders is it necessary. Otherwise is it optional or for documentation.

The block ID, sensor ID or output ID is used to set the representation of this track type to occupied. The sensor must be set Visible to be able to set the track occupied.
The switch will report locked if the block referred by this blockID is not free.

Read only field which shows the locking ID if any.
A switch is generelly locked by a Locomotive when it activates a route.

The current switch position as last reported by the server.

All commands issued under Rocrail control.
This counter can be useful for service intervals.

For double crossing type with dual motor control to use only a single slip.
Select: Default = Double Slip Switch.
Select: Left or Right = Single Slip Switch.
This reduces the commands to straight, turnout(=diagonal) and left or right, i.e from four to three positions.

The symbol number used for type Accessory or Switch.

Select a left hand or right hand for this turnout or double crossings. Threeways do not have this option.

If the switch is unlocked, and Rocrail is running in auto mode, this position will be set after the Switch safe position timer is elapsed.
This option was originally for switches which needs continues energy in a certain position. To reduce the total needed energy this "Save position" should be set to the position in which the switch does not need energy.
In the meantime it is mostly used for "Flank Protection". 1)

To create a "Double Crossover" (scissor crossing) in Rocrail, 4 switches and a "Center Crossing" have to be utilized, this configuration allows the Router to create the necessary Routes.

In order to show the "Double Crossover" (scissor crossing) on 2 parallel tracks.

The following Switch Options need to be changed: check the "Raster" function box for all 4 switches, also remove the check in the "Show" box to hide the "Center Crossing".
Adjust all other tracks accordingly. 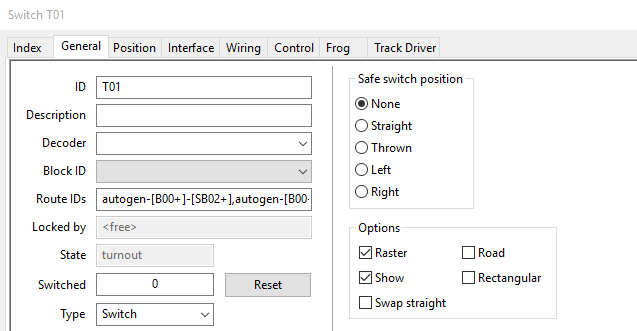 Note: If the routes that cross this "Double Crossover" were created by the Router you should remove the auto generated flag. Otherwise the next time the Router is used it will delete them and recreate routes that do not contain commands for the invisible "Center Crossing".

Instead of the chosen theme for track symbols the road theme is used.

The turnout is visible in the plan.

If the switch symbol is logically swapped this option will be used for the Reduce Route Speed.

If a switch motor gets defect this option can prevent it being used.
The background will turn to grey.

To prevent manual operation by clients.

Include the initialization of this turnout by SoD.

Activate when the Router should not define commands in routes for this turnout.

The switch cannot be set in another position, and can only be used in the actual position in automatic mode.


1)
A means of protecting movements of trains across junctions by the setting of points (either manually or automatically) that prevent any other unauthorised movement coming into contact with it.
switch-gen-en.txt · Last modified: 2021/11/08 10:57 by besra