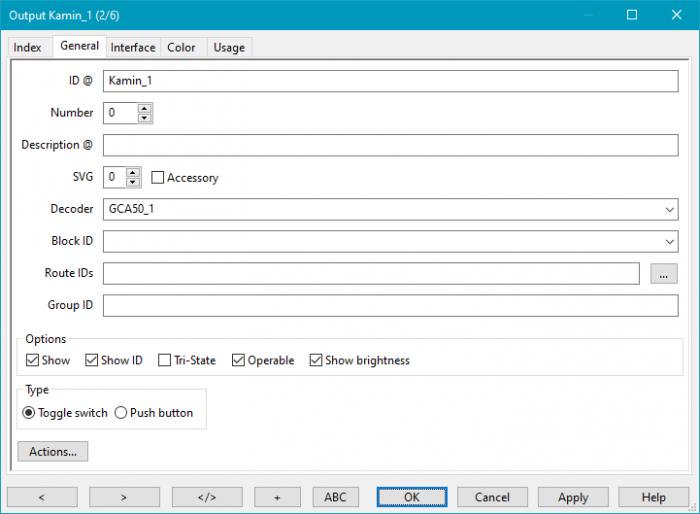 The ID is used throughout the Rocrail program as a unique key for referencing this output and is therefore very important. If you change the ID you must also edit the defined route actions.

This number is used for mapping a switch command by address to this output for flipping it.
See WLANmaus for more details.

Free text for information and tooltip.

The SVG number to represent this output object in the layout.
SVG Symbol names: "button-#-on.svg", "button-#-off.svg"
(Replace # with the wanted number.)

If this option is activated, a accessory-*.svg file will be used instead of a button-*.svg file.
This can be used to assign an accessory-* named SVG symbol of the Accessories theme to the Output object.

The predefined Decoder to which this object is connected.
This is optional and for documentation only.

For SVG #4 and #5 only.
If the output symbol has an occupancy representation it can be activated by linking this to a block, sensor or output, but normally it is linked to the block which it belongs to.

For SVG #4 and #5 only.
Route IDs are for showing the activated routes using the route or the occupancy representation if no symbol is found.
This is a list of comma separated Route IDs. If one of the IDs has become active the route representation will be activated.
With the […] button a list of Route IDs can be selected.

For creating a radio button group.
If an output belongs to a button group it will first switch all members to OFF in case this output is turned on.
This functionality should be used with toggle switches.

If checked the output object will be shown in the trackplan at the given location.

If deactivated the ID will not shown in the symbol, if that's desired only on this object.

Three possible states for this output if checked and the interface address and port are set to zero.
On, Active and Off.

To prevent manual operation by clients.

Determines whether the brightness should be displayed in the object symbol.

First click ON, second click OFF.
A long click of 2 seconds in Rocview, will generate a longclick command which can be used for triggering actions. A long click will result in an on command to the connected Command Station.