Most common and important settings are found on the General Tab of the Block dialog. 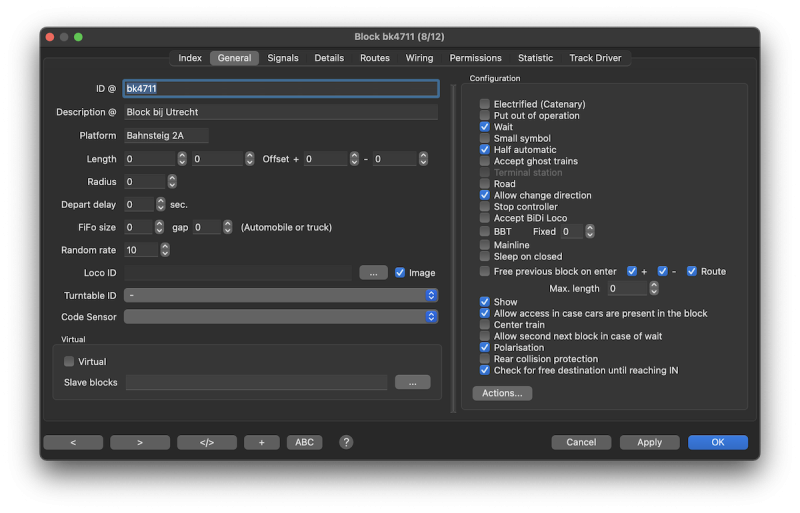 The ID is used through out the Rocrail program as a unique key for referencing this block and is therefore very important. If the ID is changed routes using this block have to be edited, too.

Free text for display only.

Alternative name for this block to use in the graphical schedule and location view.
If the block is free it will be also shown in the Block symbol in brackets.
In that case is also necessary, that the Block option Small symbol and the Rocview option Show loco image in block must NOT be activated.

If set to greater than zero it will be used to compare it with the train length found in the Locomotives: General Dialogue. The comparison is made like this:

The Min. block - train length is set in the Rocrail Properties (pre-set to 20) and is considered as the extra length to leave room for stopping the train.

Example: With the pre-set 20cm Min. block - train length and a Block Length of 100cm a train must not exceed 80cm in order to fit into the block.

The unit, e.g. mm, cm, or inch, is user-defined but has to be the same for all length definitions throughout Rocrail, i.e. Block Length and Automatic Settings. Depending on the scale used, the most suitable unit can be applied.

Note: If using realtime calculation in virtual automode, the unit has to be set in the plan properties

Length between Enter and In

The optional second length field is for virtual timing only.
If set > 0 this length will be used to calculate the Virtual Event Timer.

Note: For virtual timing also the route length between IN of the start block and ENTER the target block have to be set in the Route length

The offset of the platform position used by the Center Train option.
The two values, + and -, concern the respective Block enter side.

After the route has been set successfully, all actions waiting for the 'depart' event will be triggered. Then the start of the loco will delayed by this time in seconds (max. of 600). The globally defined semaphore- or signalwaittime will remain unaffected. This can be used e.g. for announcements.
This option is used in conjunction with Loc depart delay.

This feature is only usable with automobiles which have infra red detectors to keep distance to the vehicles ahead.
In all other cases enabling this feature will lead to accidents.

The size is the number of allowed concurrently automobiles in this block.

In addition a gap can be specified here. This should be the gap the cars keep to each other due to their Infrared-Detectors.
If this gap is >0 the length of the cars + the gap will be taken into account with regard to the block length.

The current occupying locomotive is set in this field or is empty on free.
The tripple dot […] button can be pushed to modify the loco properties. This is not usable for selecting another loco.

If the block is occupied and the box is checked, the locomotive picture is displayed in the block symbol.
The global Rocview option Show loc image in block must be activated.

In combination with block type shunting this can be used for activating a route to the home block of the scanned car.

Virtual blocks are used to group a number of slave blocks to define it as one.

Important NOTES:
The Master and slave blocks must have the plus sides ("+") all in the same direction to ensure a correct rendering.

The Show option may used to show or hide the symbol of a virtual block in the layout.

A comma separated list of slave blocks without blanks.

The block infrastructure is configured using the following flags:

This option can be activated for blocks equipped with a catenary.
If NOT set this prevents locos with engine type electric (see Locomotive Engine Type) from using this block in auto mode.

If activated, the block will not be used when running in auto mode. The train will stop in the previous block, if no alternate blocks are available.

Use the small representation of the block symbol. Only available in the SpDrS60 and SLIM-COLOR theme.


The block event "Ghost" is only active in automatic mode.

As soon as a sensor detects an occupancy in a block (red) without an active loco assignment the "Ghost" event will be triggered in the occupied block.
With "accept Ghost" checkbox ticked it is possible to operate a train manually in a layout which is controlled by Rocrail's auto mode without getting a power off command from Rocrail. An automatically controlled train will not enter a Block which is marked as "Ghost" due to a manually operated train.

Checkbox is unmarked: Power will be switched off = Emergency stop. The occupied Block will be marked with "Ghost". Operations will be possible again after the ghost event is removed. The "Ghost" displayed in the Block can be removed with right click at the block and choosing "Reset Loc Assignment". After that the block has to be assigned with the correct Loc by right clicking the block and Choosing "Set Loc Assignment". Afterwards the Train can be operated again in automatic mode.

Checkbox is marked: Power will stay switched on : no emergency stop. The occupied Block will be marked with "Ghost". The block will be denied for every other train that operates in auto mode. The ghost train will continue into the next block without being controlled by Rocrail. After it passes the first sensor of the next block, the train will activate the ghost event in this block. As soon as the train releases the last sensor in the previous block, the ghost event will be reset in the that block.

Used for blocks at the end of railway lines: The locomotive's placing is swapped triggered by the in event of the block allowing the train to leave the block in opposite direction.

Tip: If the placing should only be swapped for trains able to run in both directions without shunting the loco these trains have to be defined as Commuter Trains and in the Rocrail properties option Stop Non Commuter Trains in Terminal has to be activated.

This flag should be used with care! The page on Directions should be carefully read to get an understanding of the behaviour.
The option has the same impact as if the train was swapped by hand!

Use the road theme to visualize this block.

Note: This option is disabled if Terminal Station is selected (and vice versa). Either "Terminal Station" or "Allow change direction" (or none of these) can be selected.

Note: This option should be disabled if these blocks are part of a Critical Section.

A stop controller, like Lenz ABC, will be used in combination with the enter2in event to halt the train.

Use only with the enter2in event to avoid trains running through this block even if it has to wait.

Note: Use this option with care because it will also accept trains which did run over a wrong set route.
Note: "Accepting" can show in the block by using this option.

Enable BBT for this block.

BBT is optimal for visible blocks in which trains must always stop (wait is set). In all other cases the loc should slow down according to the CV4 decoder setting.

The function of BBT is defined for the driving distance between enter and in.
Is there for the block only one feedback enter2in, the timings of BBT with the timer of enter2in can collide.

Therefore it is strongly discouraged to use BBT and enter2in sensors together in the same block.

An enter2in defined sensor should be changed to enter and at the locomotives the option Generate In is to activate.
In this case the in event is determined only by the BBT timing and does not collide with another timer.

Keep the loco at enter speed for this number of BBT steps.

If this block is part of a Location it will always allow to depart instantly. Also the time to wait will be reduced before retrying to find a new free destination.
Info: This will overrule the minimal occupancy, FiFo and Loco priority.

This option is only for trains with the same option activated.
With the +/- options the block side can be defined for this behavior. Default: Both sides.
With the Route option is it possible to free up the current route too.
The value "Max. Length" defines that an early release, of the previous block, is only performed for trains up to this length.
This prevents that the "From" block is released, before longer trains have completely exited.

Show this block in the layout.

Allow access in case cars are present in the block

If there are cars left in the block it is normally not allowed to access this block if it is not set as shunting or the loco did not get a "goto block" order.
This option will overwrite this behaviour, i.e. irrespective of the block type access is allowed even if cars were left in the block.
See also Train Locality.

Allow trains to center in the block by BBT.
Related parameters:

Allow second next block in case of wait

If the train must wait in a block this option allows to reserve the second next block nevertheless, and the route will be set ready to go.
The same option must be set in the loco properties.

The DCC polarisation In combination with Railcom and Use BiDi Direction.
If this option is deactivated the reported direction will be inverted.


Check for free destinations until reaching IN

Is only effective in this block for locomotives whose corresponding option is activated. See notes there.