Essential Features for the automatic mode can be defined on a train instead of a loco.
This will be useful when a train-oriented operation favoured, features defined in a train are omitted to the loco in case of a consist.
The advantage is the ability to exchange locos freely, just by establish and release a consist, without changing parameters in the loco

In Rocrail parlance a train is a group of one or more wagons, to which a locomotive is assigned.


Assign a Loco to a Train

Assemble a Train by Code 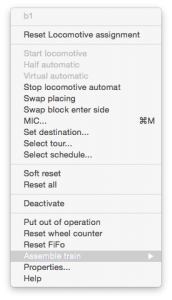 If all cars have a way to identify themselves by RFID, RailCom or Barcode the block option "Assemble Train" can be used.
The block must have a detector sensor to be able to scan the code of the in coming cars.
If all the cars are in, the block command "Stop assemble train" can be issued to create a new train with the given ID.
The train will be assigned to the loco already occupying the block.
If the loco has already assigned a train the cars will be added to the existing train. (No new train ID will be asked.)
To view the progress in the Rocview Server windows the Calculation trace level must be activated. 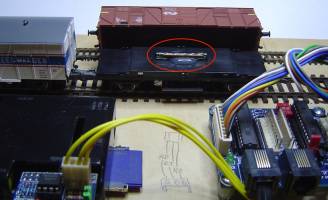 Cars can be removed from the train with the Disassemble menu items.

Cars may have a decoder: Car Interface


1. Call throttle of the car

Option: Operators and trains, Tab: Train, select a train and a Controller pops up.

2. Define functions for a train

It is possible to define 28 functions on train level. Functions are controlled by pressing "shift" at the loco throttle after the train is assigned to this loco.
With this function, all the train decoders that are available are addressed simultaneously with the same function.
If only the second variantion should be used for a train, then check the dialog "Only functions with shift work". The third variaton described below will not be executed.


3. Synchronize functions with the Loco

When a locomotive is assigned to a train -and the shift only functions in section 2 are not selected- accesses Rocrail all locomotive functions 1:1 of the train cars (basic functions, such as peak light on/off or directional light change). This is of particularly interest by locomotive and control car combinations. In addition, all other functions of the locomotive can be passed to the cars (e.g. headlights, interior lighting, ….); this is necessary due to (possible) different types of decoders.

In automatic mode Rocrail is allowed to enter a block depending on the length of a train or the block. This insures that trains only use blocks, which offer enough space for the current train to fully enter can and thus to avoid accidents due to excessive length. It is recommended to use values in millimeters. 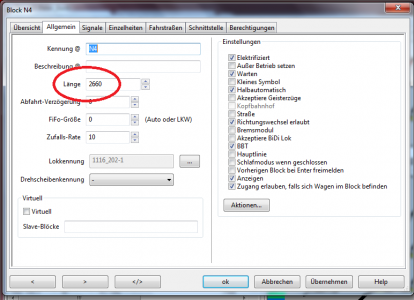 The values in all fields for the length parameters are integer. By using values in cm or inch the complete length of a train may be not exact enough in case of long trains. Rocrail is only comparing values, not dimensions. Therefore the dimension can be freely chosen (regardless of other statements).

Some parameters will have impact on the Loco speed and Acceleration:

The location for a Train will be automatically updated if the Loco arrives in a block.
After releasing this train from the loco, the train still remains in that block which is visualized as shown in the next paragraph.

Note: A block with unassigned train/cars can only be used as loco destination if this block is set to Shunting unless the block Allows access in case cars are present in the block.

In Rocview block IDs are suffixed with a Number sign (#) in case one or more cars are residing in it:

Attention: only the list of cars is shown in the tooltip; the sequence of the cars is not displayed!

Example to sync Functions between loco and car


Result: the car functions can be controlled by the loco throttle as long as the train is assigned to the loco.