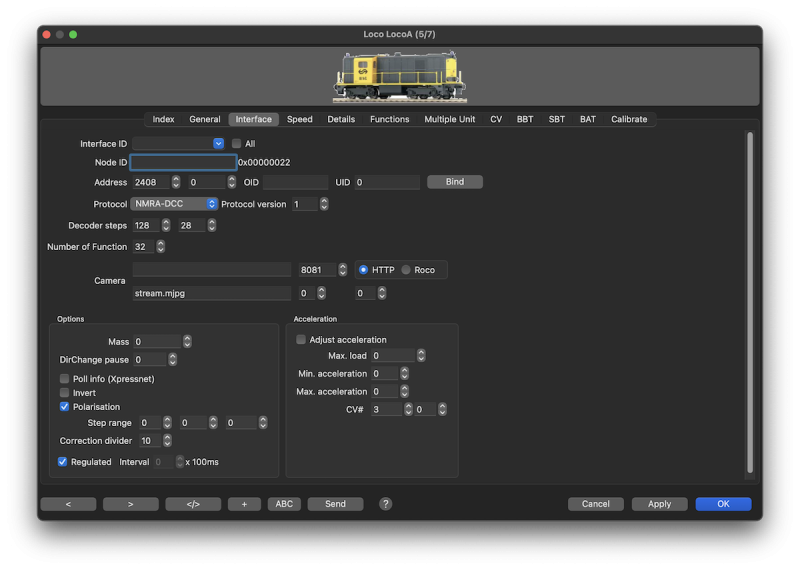 If this option is activated all Loco and Function commands will send to all connected Command stations.

The decoder address which range depends on the decoder type and underlying Command Station.

The optional secondary address can be used for WIO or T4T (TrainCoupling&CommunicationSystem).

Some Command Station, like the ESU Ecos, are using an Object ID instead of an address for referring to a specific loco.
This field can be left empty because the Ecos library can also look up locos by ID or address.

Some command stations do support multiple protocols; Check the user manual for details.
If the address is set to zero the protocol should be set to Analog for Track Driver support.

Note: Serverdefined, is the default mobile digital protocol used by the Command Station (CS). This setting is only of interest in case of multi protocol CS like Ecos/CSx(dcc/mfx). For a "DCC only" CS this option has no effect at all. Or for the Märklin 6051 its always Motorola.

If the Command Station cannot determine the decoder type itself the version must specify as listed in the SRCP description. Most systems do not use this parameter because it is set directly in the CS or it does only support one version.

Number of speed steps the decoder is set up to. Rocrail needs the number of the decoder's speed steps e. g. to be able to calculate the wanted velocity in percent or KM/H.

The optional second speed steps can be used for T4T. 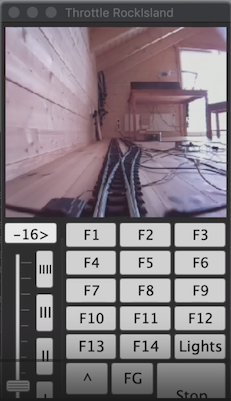 The IP address and port of the locomotive its live streaming camera, which will be showed in the throttle dialog.
Supported streaming formats:

The field in the middle is the number of frames to skip. This will reduce CPU power and fluency of the video stream.
Note: Frames will also be skipped if the graphic processing is slow, even if this parameter is set to zero; The video stream cannot be paused.

The field on the right is an option for the ThrottleDialog.

The Roco video locomotive must be configured in "Client Mode".
This can be done with the Roco Videolok utility.
The port must be set to 5152.
Note: It can take up to 30 seconds before the first frames are coming in after starting the camera. 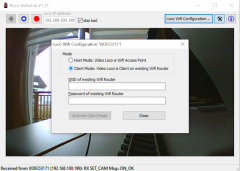 Note: If a train is assigned to the locomotive, and this train contains a car with a streaming camera, the camera of the car will be used instead.

A value of 5 is a good start to experiment with.

Some old Delta like decoders need some pause between a direction change and the last turnout command. With about 100ms this will do the trick.

XpressNet does not propagate loco changes issued by throttles.
By activating this option, and if the loco is not in auto mode, every second a request is send to the Command Station to get the actual information needed to update the Rocrail clients.

Use with care. This option is not recommended and not supported in the Forum, and uses unnecessary CPU resources.

Inverts the hardware running direction.
This is an alternative to program the direction in the decoder by CV29.

A flag for correcting the BiDi, RailCom, direction in case the decoders is not correctly polarised.
See also: BiDi Direction

If WIO as Mobile decoder be used, this can simulate Vstart and Vhigh, CV2/CV5.

Uncheck this option only if the decoder has accelerating and decelerating not implemented.
The interval is the time between the speed steps.

The max. load for this locomotive in tons.

The CV3 range to use for loads between zero and max. load.


Notes on none Regulated Decoders

This option is not active and greyed out by default. It can be used for old-fashioned decoders offering no regulation and mass simulation.

The Interval merges in a pause between the decoder steps with a value of 1 corresponding to 100ms. With modern decoders this parameter is not needed and should be left to zero.

Tip: The Interval can be used to increase the deceleration / acceleration for decoders with a very limited tuning range. Some older Marklin locos with control potentiometers suffer from this limitation. Small interval values, e. g. in the range of 1 to 5, may help in this case. It should be noted that no other locos in need of automatic speed control at inclines (see Regulated below) are present on the layout and that in all blocks the type of incline should be set to "none".

If the decoder has motor management (BEMF) this flag should be set to prevent velocity changes by Rocrail when a locomotive enter a block defined as an incline block.
Deactivating this option activates Interval (see above) and automatic speed control at inclines.

Note: Rocrail is able to adjust the speed at inclines within certain limits in auto mode. The type of incline has to be specified in the block properties.

The following table gives hints on the impact of the parameters. It is supposed that the V_Mode-Percent-Option is not set and km/h is applicable.

Independently of the values in the table, the breaking will end at the speed defined in V_Min.

Hint: At interval = 10 the number of steps = time in seconds.
Higher values for Interval and/or Decelerate reduce the amount of necessary steps respectively speed commands.
This can help to avoid the above mentionned overload of the command station.

Hint: The speed steps are not visible in the throttle, but only in the trace or on the real layout.