Calculation of block brake time automatically to decelerate linear from enter to in.

Note Enter2in sensors are not supported in conjunction with BBT.

You can find more details here. 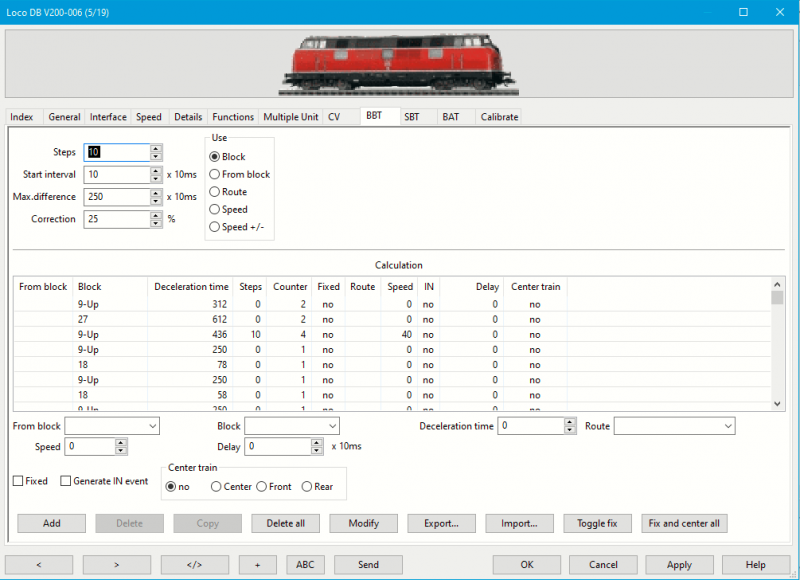 The BBT records can be sorted by clicking on one of the columns headers.

The number of steps preset to use for BBT.
The actual number of steps in the BBT records can differ from this number; All depends on the enter speed.
After the learning process is finished the number of actual steps should be equal.

Default 10; Range 10…250.
This value is used as start for a new BBT record and will be used as the initial timer between the steps.
It may be, that the default 100 ms, 10 x 10 ms, is to low to get a fast learning curve.
The interval is an approximately value and is Operating System dependent.

Longer differences will be reduced to this max. to avoid unusable values in case a train stops or is derailed between enter and in.
The default value is 250 = 2.5 Seconds.

After each stop in a block the BBT is re-calculated. This percentage of the difference is used as correction.
25% is the default value which has been proven to be a good choice.
Use a higher value to speed up the learning curve. 100% can also be used.

This option determines which record key will be used to create and to lookup.

For the block in which the loco stops a BBT record is created, independent of the entry side of the block.
Note: The From Block column is in this case irrelevant.

For each from block a separate BBT record is created.

This method does not function if the loco has the Free previous block on enter active.

For each route a separate BBT record is created.

For each speed a separate BBT record is created.
Note that Rocrail only knows the locos speed setting and not the locos absolute speed at enter. This is only relevant if the loco is still accelerating or decelerating when it passes the enter sensor.

The same as Speed, but with regarding the block enter side.

This value can be set by the user and is for fine tuning on the brake point only.
The default value "0" will start the BBT immediately on enter.

The block for which the calculation has been made.

The deceleration time is in units of 10ms.
This is the time between enter and in and will be divided by the number of steps.

The steps column shows how many steps could be counted for last run between enter and in.
e.g. if the loco had stopped far beyond in the value will be less than target.

The number of calculations for this BBT record.

No corrections will be written in this BBT record if set to fixed.
This can be useful in order to prevent an already determined optimum setting from being inadvertantly changed automatically.
The time in which a loco brakes to V_min can be altered intentionally and set.

At the end of the intervals an IN event will be generated.
This can be used to create a loco dependent stopping point.

For more information about this option, see BBT Generate IN.

If the Block has Length and Center train set, this option can be used to calculate the interval for stopping the train approximately in the center/front/rear of the block platform. An IN event will be generated.
The Fixed option of the BBT record must be set.

Note: Before activating this option the BBT learning procedure has to be complete! That is, the train should evenly decelerate between ENTER and IN without the train 'creeping' a longer distance with V_Min.
Thereafter the BBT entry has to be set to fixed, then option Center train can be activated.
The length of the train (loco and cars) and of the block must be set.

No BBT updates are received if Monitoring is off. In this case closing the dialog with OK could erase existing BBT lines.

A new BBT line will be added to the list.
Select the line, define parameters in the fields and then click the Modify button .

A copy of the selected BBT line will be added to the list.

The modified parameters are inserted in the BBT line.

Export all BBT lines in a XML file.

The fix flags of the selected lines will be toggled.

Fix and center all

Set all BBT records to fixed and center train.