What is shown, and which actions are available.

The sorting order can be changed by clicking on one of the column headers.
Columns can be reordered by dragging with the left mouse button and shift down.

A right click on one of the column headers will open de Column selection dialog. (Only if wxWidgets version is at least 3.0.2) 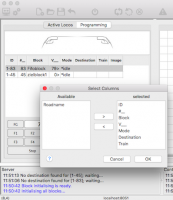 Filtering can be activated by the View menu. 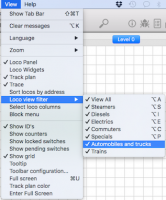 The ID, Image and Train fields can be used with Drag&Drop to set this loco in a block; Just click in one of those cells, drag it into a block and release the left mouse button to drop.
The block will be cleared before if there was already another loco in the block.

Loco ID which is set in the General tab of the Loco setup dialog.

The interface address as defined in the Interface tab of the Loco setup dialog.
If the loco is in a location, and is on top of the FiFo, this address will be suffixed with a plus (+) sign.1)

Shows the block which the locomotive occupies.

Overview of all modes a locomotive can be in.
If the locomotive is operated manually using a speed controller, will show the throttleID. (Rocview, andRoc…)

The next block which will be used as destination.
The number between the brackets represents the schedule index: 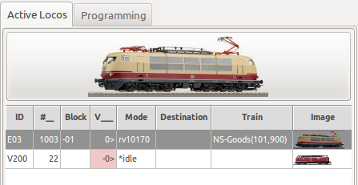 The linked Train for this loco with the total length and weight in brackets.
A train can be Assigned and Released with the Loco Tab Context menu.
The total train length, including Consist members, is automatically calculated for use with blocks and routes.

V is the locomotive velocity.
When the number is prefixed with a minus sign means that the logical direction is swapped. Also the background of this cell will turn into red.
">" behind or "<" before the number denotes the set direction.
The optional value between brackets is the reported km/h from the loco decoder. (RailCom&BiDiB) 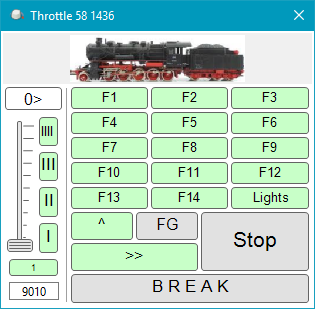 With a double click on one of the locos grid cells, except for the ID, Image and Train column, a throttle control is launched: Loco throttle.

For manual controlling a train. The function buttons may also be used in automatic mode.

The F0 is in most systems used for the front/back lights of a locomotive.

This will send speed zero to the selected loco.
If the loco is running in automode this will activate the pause which will reject any further speed commands. This is made visible with the red dot in the upper left corner of this button.
With a second click on the STOP button the pause will be ended.
See also: Pause on stop

See the Loco Functions on how to set the button Icons.
The icons will be scaled to fit in the button. (7395+)

The optional SpeedOMeter can be activated in the Rocview preferences.

Starts or stops the automatic mode for this loco.
Depending on which is selected as destination the Start command will:

Stops the schedule or tour recycle or follow-up.

Switch between automatic and half automatic mode. This setting will stay active for the current Rocrail session.

Reset all, except for the current block and schedule, for the selected locomotive.

Reset all, including the current block and schedule, of the selected locomotive.

See: Loco direction.
Note: This will also swap the block enter side.

Free a loco to make it available for an external throttle; See the manual of the used Command Station for details.

See: Running to a defined destination.

Useful if a loco is in a block, but it should be prevented to start this loco by, e.g., start all locs or resume all locs.

The dialog Operator Index will be opened and a selected train will be assigned to this locomotive.
see also:

The assigned train (column "Train") will be released from the locomotive.