The Finder can be used to find a path from one Block to another or to a Location.
This function must be enabled with Use Finder for destination path or in the Rocrail Automode Properties
The Finder will be active after setting a Destination.

After activating, by setting a destination, the Finder will try to find a path to it by recursively iterate through all Routes.
More then one path can be found depending of the complexity of the layout.
The path will be converted into a temporary schedule which will be activated for the selected Loco.
The new schedule will have a "F" prefix in the table and will be removed at the end of the Rocrail Server session if not modified before with the Schedule Dialog.
Example of a schedule name created by the Finder: F[-1-staging]
If already an "F" schedule exist for the wanted path it will be used instead of generating it again. 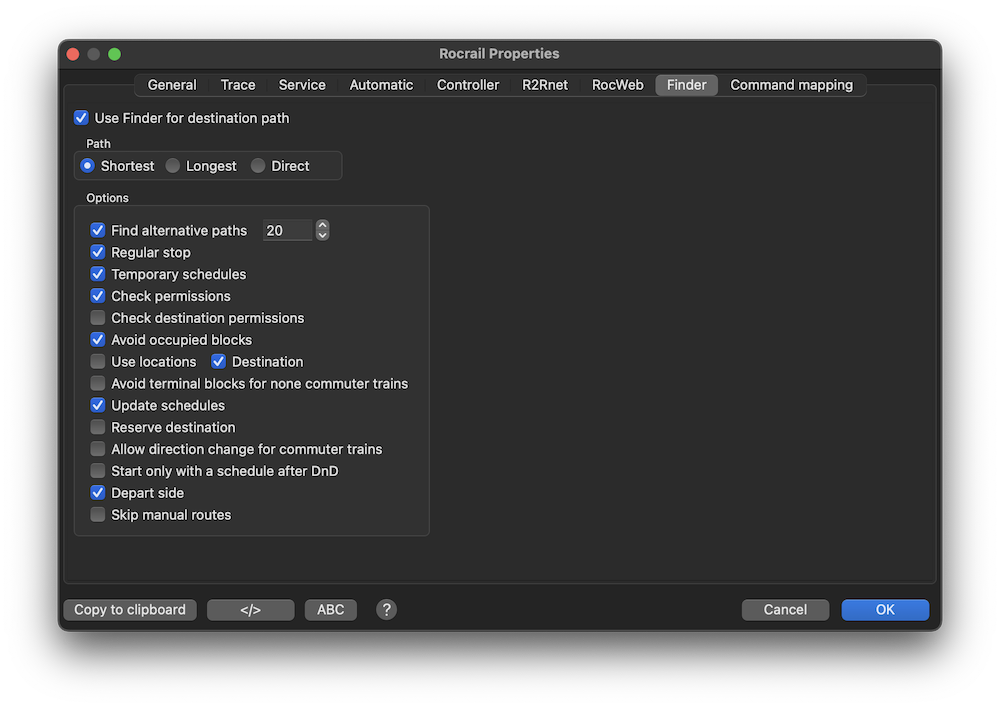 Use Finder for destination path

See: Use Finder for destination path

If more than one path has been found the following options can be used for selecting one:

Select the shortest found path.
Note: The Route preference is used to select a shortest path in case of multiple possibilities.

If not enabled, or no valid support key, the finder will stop after the first path that has been found. Depending on how the layout is designed this could be a (big) detour.
The max. number of alternative paths can be set. The default is 10 which normally will do. Increasing this number can cause more CPU usage without any better paths found. But in case of layouts with many routes, this number should be increased to be able to find the shortest way.
This number of alternative paths is also restricted by the number of routes.

All schedule entries will get the Regular stop option.

The generated schedules will be removed at shutdown.
This is default and highly recommended! Changing routes can make Finder schedules invalid and can lead to deadlocks.

Check if the loco has permission to use routes and blocks.

Avoid occupied blocks and routes to find a path.
Depending on the block and route occupancy and layout the find result could be zero.

Use block locations in the generated schedule.
If the option is not activated, the finder creates a "block-by-block schedule" to the destination according to the other options.
If this option is activated, it is checked whether the blocks are in a location. In these cases, the location is entered instead of the block.
If not all blocks in a location leads to the same follow-up block/location this will end the schedule.

If this option is active (default), the "Use locations" option also applies to the destination.
This option must be deactivated if an defined block is to be used in the destination instead of an existing location.

If a train is allowed to enter a terminal block this could be a dead end.
Use this option to avoid running into terminal stations.

If a schedule already exist it will be updated to meet the actual permissions.
This option is recommended to avoid running into occupied blocks.

Start only with a schedule after DnD

If no path is found this option will prevent starting the loco after using Drag and Drop.

Set the Depart Side of the schedule destinations.