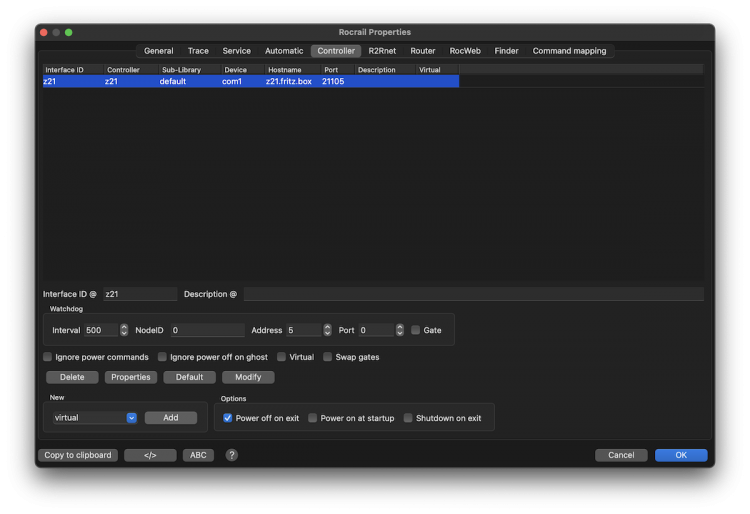 Ignore power off commands on ghost

In case there are more then one Command Stations defined this option can be used to ignore a Power Off on Ghost.

Set the selected Command Station (temporary) in virtual mode.
A Server restart is needed.
If this option is enabled, the virtual CS library will be used instead of the library defined in the properties.

Swap the gate for switch and output commands.
Supported CS:

Before a Commands Station can be deleted it must be selected from the list.
The pre-installed should be deleted to make sure the new added one works correctly.

The properties dialog is Commands Station type dependent and is described in the Command Stations section.

Attention: Some CS use the same dialog, so is it possible that options are included, that are not available to all CS.
Which is described in chapter of the individual Command Stations.

Push the selected Command Station on top to make it the default.

Take over the Interface ID, the Description and the Ignore power commands option for the selected CS.

Power Off On Exit

Default the CS is commanded to power off the tracks on exit.
Uncheck this option if this is not wanted.

Power On At Init

Turn global power on after initialising the CS.