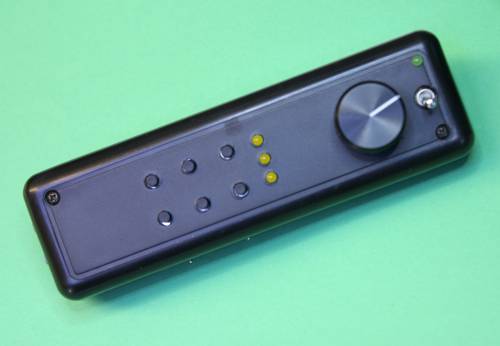 The RocMouse is a hardware throttle which can be connected to the GCA-Pi0x.
RocNetNode send the throttle commands direct to the Rocrail server so the throttle will be Command Station independent.
Assigning a loco to a throttle is done with the dispatch command.
There is furthermore not much to explain about this unit.
No microprocessor is needed, since all intelligence is handled by Rocnet. Just one 8 bit I2C expander and 1 A/D I2C converter is used.
Like GCA-PI02 and GCA-PI03, this unit also contains a line driver, to enable longer wiring.
The used potentiometer is a cheap standard type pot with 6 mm axle.
It will be suitable for all circumstances.
There is however room on board to replace it with the much more expensive sealed types.
To achieve a more stable reading from the speed selector, an extra 3,3V stabilizer IC5 is added.
Also, to avoid reaction on the speed while pushing S6 or the reverse switch, these switches have additional zener diodes.
This all together results in a very nice hand held throttle, and very easy to assemble yourself.

Factory made boards and Kits are available:

In this testkit, a professional Potentiometer is installed, which is in different position assembled as a normal -in package- potmeter.

A few remarks have to be made to help you being succesfull with the production of this RocMouse.
Fix the empty PCB with fasteners in it's future housing, and use it to drill the exact positions of the pushbuttons, SW1 and leds.


One other remark on mounting RP1.

This 6 pin resistor array has one common point, indicated with small stripe or dot.
This indication should be at the side where text 'RP1' is marked.

If Rocnet is not the first Command Station in the list de Dispatch IID must be set: DP IID
Linking a RocMouse with a loco is done in two steps:

It flashes fast in case no loco address is assigned to this RocMouse.
After a dispatch and any command from the RocMouse it will flash slowly.

The direction switch has three positions:

Flip functions in the selected group.

GCA_PI04 needs adressing.
Max 8 RocMouses can be connected to one Raspberri Pi.
Adressing should be made on positions at the back side of IC2 and IC3.
It is established by soldering the center point with a or b, according following list.

Depending om cable length, it sometimes happens that RocNet is blocked after plugging in the PI04 in th network.
This can easily solved by soldering a 100 uF (mimimum 16V) close to the connector where PI04 is plugged.
Remind + and - of Elco to be connected at the right place.
Picture will follow shortly.