Rocrail Trace, What is it good for

Traces are to make program activities visible to understand what is happening or trying to solve problems.
If everything is as it should be: Turn off all trace levels. 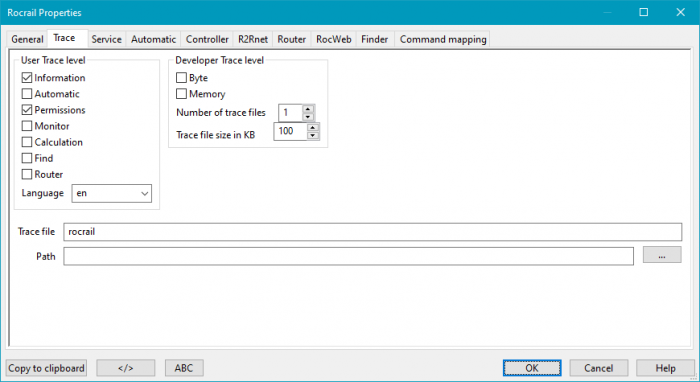 For watching all Rocrail server activities; Should be turned off if all runs well.

Shows in detail what the automatic library is doing and is especially handy for tracing down problems occurring when running trains in this mode.

List up why a locomotive or train has no permission to run in a block or to use a route.

Note A handy trace to see why a loco doesn't go to the next block.

Standard switched OFF; to show activities of digital decoders and events.
Use with care because all messages are also send to Rocview which could get a queue overflow if the monitoring is very massive.
In most cases: Disable this option if all decoders are working as expected.

Traces the MVTrack speed and BBT calculations.
Also the final results of the track plan Router will traced.

Extra trace in case no destination is found.

Traces from the Track plan Router.

Language in which to output translatable server trace lines. (currently only for "Permissions" level)

This is for developers only and dumps out at byte level what is send and received between Rocrail and the Command Station(s).

This is for developers only and traces out in case more memory is allocated.

The number of recycle trace files.
The default is 3.
Only one file is used if set to zero or one; This file will grow unlimited!

The trace file size in KB if the number is set greater then 1.
The default is 100KB.
For using the Trace Filter leave it at 100KB.

The name of the trace file to be used.
Trace files will get a running number to get a history of 10 (see value in trace files field) for debugging and service.
If left empty no trace file will be written.

Path to store the trace files; In the working directory if left empty.
Note: Starting from revision 2.1.1057 the use of environment variables in the Trace Path is allowed, for example: %HOME%/trace