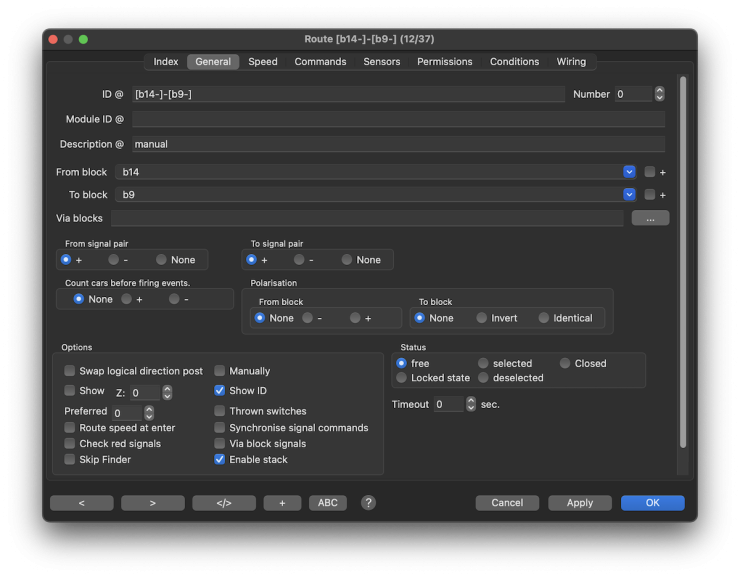 Tip: Manually creating a route is considerably simplified, if the "Record a route" of the Command recorder is used.

The ID is used throughout the Rocrail program as a unique key for referencing this route and is therefore very important.

This number is used for mapping a switch command by address to this route for activating it.
See WLANmaus for more details.

Modular layouts need route ID's to make sure automatic generated routes are not saved in the global routes table.
More or less for internal use only, but provided for expert corrections on the fly.

Description of the route. The entries are informal only. "Generated by the router" indicates that this route is created by the router functionality.
Whether the route is processed again by the router or deleted by the turntable manager at the end of operation must be defined by setting the option Automatically generated.

Starting point of the route. Read also: Direction in Rocrail
The + option has to be activated if the train is departing from the + side of the starting block.

End point of the route. Read also: Direction in Rocrail.
The + option has to be activated if the train is entering the destination block at the + side.

If the From-To block crosses other blocks it should be set here to avoid collisions.
It is a comma separated list of block ID's without white space (blanks).

right from this field open the Block dialog. There can one or multiple blocks selected/marked. If the dialog will be closed with OK then the selection will be inserted in this field as a comma separated list of crossing/via blocks.

Note: All the block definitions are ignored, if this block is used as a Crossing Block in a route. Apart from that, this block can still be used in other routes as a regular or as a crossing block.

Defines which signal pair has to be set for the current running direction.
The option "None" does no signal handling at all.

If set the number of sensor activities are compared with the number of cars specified for the running train.
Events for automatic control are send to the Rocrail engine not before the count of cars matches with the train.

Polarisation of the From block can be set negative or positive.
Supported Systems:

This option can be used for routes to and from a turntable bridge.
This will overwrite the Track polarisation if set other then none.

Polarisation between the blocks can be inverted by setting this value to Invert.
Supported Systems:

The switches in this route must be manually be set; The locomotive will wait until all switches are set according the command list.
See also: Manually operated routes

Shows a route symbol with the ID of the route

. A click on the symbol sets the switches according to the route.

Overrules the Use Random Block Rate if one or more routes to all possible destinations have the preferred set > 0.
If more than one route originates from a block (running either to different blocks or just to one block), the route with the highest preferred number will be chosen.
The default value is zero. The range is 0 to 100.

Reports always thrown switches event if there are none in the command list.
This option can be used in combination with SBT and Reduce speed at enter .

Use the route speed at ENTER.
Normally this speed is used at the IN event.
The same option must be set for the Locomotive.

By default, signals are only issued after a locomotive wants to run in this route.
If the option is set, the signal commands are made directly after this route has been reserved and set.

All signals in the command list are checked if all are not set red.
The train must wait in case one or more signals have the red aspect.

Is the option aktivated, this route from the finder will be not used.

Include or exclude this route from the locomotives Route Stack.
To prevent static behaviour, insure all other possible routes of the From block have also the same "Use Stack" option set.

The current route status is indicated and can be changed.

Status in the track plan symbols

The following details are based on this picture.

Now it is very useful to reduce the velocity of a loco, when it exits block 1 to use the route 1 → 2, because of the following reasons: