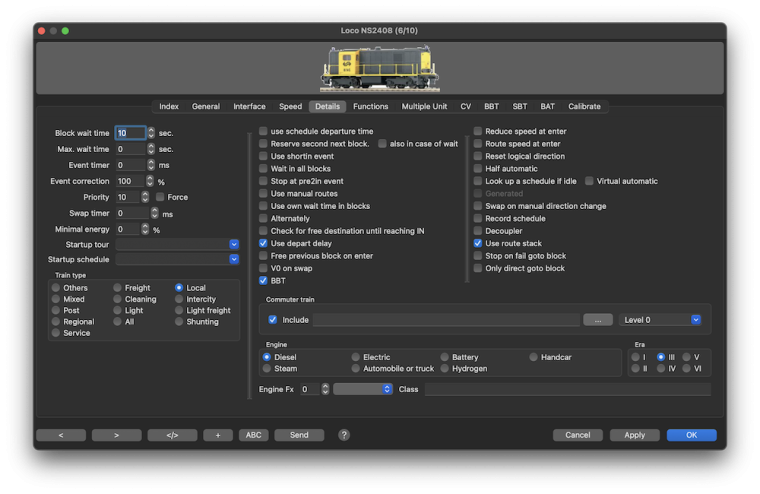 This time is specified in seconds and will be used in blocks where setting is Wait Loco.
A value of zero will be replaced on the fly with 10.

The maximum wait time in blocks.
Default zero seconds which disables this option.
This wait time overrules the calculated block wait time for this loco and its priority level in case the new destination could not be locked.

Use with care and keep the timer as low as possible to avoid overrunning other events!
This is the approximately delay in ms between the enter and the in event when an enter2in sensor is used. The block event timer is used if the loco's event timer is set to zero (see: Block Routes) or Force block timer is selected.

The value is specified in %. When an in or enter2in event occurs with a timer value other then 0, the timer value is corrected with the event correction percentage. By adjusting this setting, the stopping characteristics of individual locos can be compensated so that all locos stop at the desired place.
See: Block Routes for details on the in event timers.

Train priority used for multiplying the block wait time if no destination is found. Default priority is 10.
This priority is only used in case of ICE and/or Mainline.

If the train does not normally have to wait in the block the following formula and table shows the effect of the priority value:

The lower the priority the more CPU power is used.

Tip: Use with care and lower it only for a few High Speed trains.

Force to use the priority timer regardless off train type and/or mainline in case of block wait.

Some Command Stations will send an emergency break before changing direction, which will cause an abrupt stop of the locomotive.
In that case this option can delay the swap command(which results in a direction change) by the number of ms specified, to avoid this abrupt stop.
The swap will be executed directly at the "in event" in terminal stations in case the loco swap timer is set to zero.

If the reported energy percentage get below the minimal energy percentage, the loco or automobile will send to the Home Location.
If this value is zero, default value, the go home action will not take place.

Use this tour on start-up.
This optional ID is for trains running always the same tour and saves setting it by hand.

Use this schedule on start-up of Rocrail. (If no tour is selected.)
This optional ID is for trains running always the same schedule and saves setting it by hand.

The type will partly influence the choice of a new destination block depending on the block settings and permissions as described here.
By using trains, the train-type of the train overrules this setting.

Further details are described on page Setting Up a Commuter Train.

Departure times in schedules will be used by this train.

If the global flag is not set in the rocrail.ini this option is available to every individual train to get a better through put. This could be useful for Inter City trains.

Also in case of wait

This extra option will reserve the second next block also in case it must wait, which is for ICs very useful to be able to depart as planned.

The same option must be set in the block where the loco must wait.

Short trains can use this event to stop in a block.
Only usable when a block has a shortin and an in event defined.

Short trains can use this event to stop in a block.

The locomotive will solely run on manual set routes if this option is activated.
For more information see: Manual operated routes.


Use own wait time in blocks

This option will force the wait time specified in the loco properties in every block regardless of the block settings.


Wait in all blocks

Activate this option if the locomotive should always wait in all blocks, regardless of the waiting settings. The Block wait time defined for this locomotive is used.

Additional option that applies the option Wait in all blocks at the block after next. This is helpful, if in short block sections a locomotive in the BBT learning phase cannot reach the regular entry speed in the next block while waiting in all blocks.


Check for free destinations until reaching IN

If set the checking for free destinations will continue after the enter event and until reaching the in event. If in the meantime a free destination block becomes available the train accelerates again and is not forced to stop.

Use the Block depart delay for this loco.

The length of a train must be less than:

It frees up the previous block and the current route on the free or enter event to make it available for other trains.
This option also depends on the Block option and the Train Option.

Sends a velocity zero command to the loco decoder to swap the front lights after a swap of direction.
Also useful for updating throttles in case of half automatic.

Activates the Block Brake Timer ( BBT ) for this loco in blocks with the BBT-option activated.

Reduce speed at ENTER if the next route has thrown switches.
This option depends on the No speed change for switches Server option.

Initial, at startup, the loco logical direction will be reset to the default values.

To use this locomotive in half automatic mode even with Drag and Drop.

Look up schedule if idle

If the automatic mode is active and the loco is in a block and idle, a fitting schedule will be searched which meets the following conditions:

This lookup is triggered by every new model minute.
After assigning the schedule to the loco it will be started in auto mode.

With this option the loco will be started in virtual auto mode after assigning the schedule.
This option is only active for the current Rocrail session and will be reset at startup.

The locomotive was not created in the locomotive dialog, but is
* Guest locomotive.
* downloaded from the command station.
* generated in a block by BiDi event.
Remove the checkmark, if the locomotive needs to be kept in Rocrail.

In half automatic mode the direction of the loco is swapped.

This flag can be used with a query in XMLScript to check if this loco has a decoupler.

Keeps track of used routes and provides an on the fly Preferred Route value.
This option makes it possible to let run a locomotive alternately all possible destinations in random automate mode.
Routes can be excluded by the Use Stack option.

The Loco class(es) used in Block, Route permissions and actions.