Setting up a commuter train

Commuter trains are trains allowed to change their running direction situation-related. Generally these are trains which can drive in any direction without requiring locomotive shunting.

Trains exclusively running between Terminal Stations, however, do not necessarily need to be defined as commuter trains provided option Stop Non-Commuter Trains in Terminal in the Rocrail properties is deactivated.

In order to run a train as a commuter train the following conditions have to be met:

Trains shuttling between stopover blocks, i. e. blocks not representing end blocks of a line, are sometimes referred to as yo-yo trains. This type of train is achieved if one or more stopover blocks allow direction changes.

Even then trains do only change their direction if Rocrail is not able to find a destination opposite to the block enter side (i. e. in driving direction) because the following block 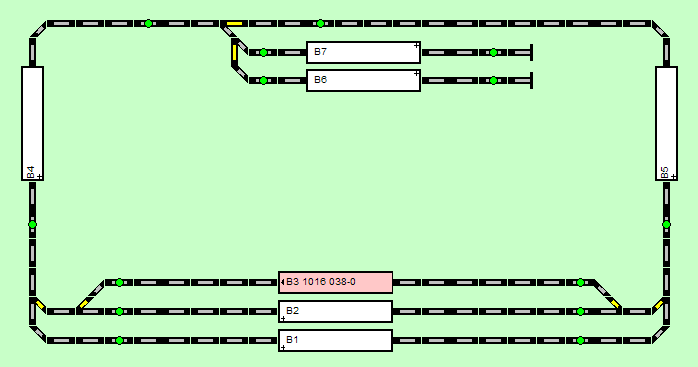 
In this example loco 1016 is defined as commuter train. The loco may

The loco will change its running direction