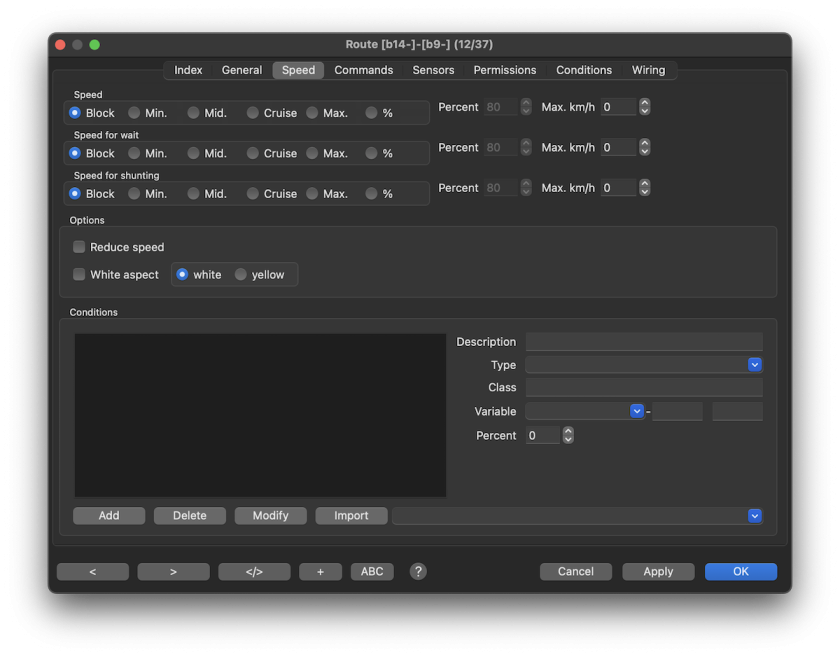 Setting the speed for the route:

If the route velocity should be reduced because of switches in turnout position option Reduce Speed can be used.

Relation between route and loco velocities (see Locomotives: Interface for the latter):

1) If not defined differently with V_cru.

Alternative route speed is used if the train must stop in the to block of the route, whether due to block option 'wait' or red signal.
This speed should be lower than the normal route or block speed and can be used, if the distance to the "Enter" of the destination block is not long enough,
to reach the normal speed in the acceleration phase.
If the loco uses BBT with speed option, an additional BBT record is generated for the destination block with the 'Speed for wait'

The default percent to use in case the speed selection is set to %.

The maximal route speed in KmH.

Note: Max KmH has to be set for using Realtime Calculation in Virtual Automatic.

The velocity is set to V_mid in case a switch in the route is set thrown and the current velocity is higher. Reduced speed will be used until the enter event of the destination block is triggered.
Signals will be set to the white or, depending on the number of aspects available, yellow aspect to indicate reduced speed.

Note: The global flag No Speed Change For Switches in the Rocrail properties will overwrite route-individual settings and therefore has to be deactivated if this option should be used.

Use the white aspect to indicate reduced speed.

The signal will show white (the fourth aspect) to indicate reduced speed. If the signal can display three aspects only, yellow is shown instead. Used with most signaling systems worldwide. German signaling: Chose yellow instead (see below).

The signal will show yellow (the third aspect) to indicate reduced speed. Used with signaling systems where the fourth aspect has a different meaning. Example: German signaling, where white is the shunting signal.

Conditions are for manipulating the percent value.
The Type, Class and Variable value must match, if set, to be activated over the default percent value of the route speed.
If no criteria are set this will be used for every train.

The description is used as reference to look up the related properties for this speed condition.

The train type is optional but if set it must match.

A comma separated list of class names. One must match the train/loc class.
This is optional but must match if set.

On this line the fields are from left to right:

This is also optional but must match if set.