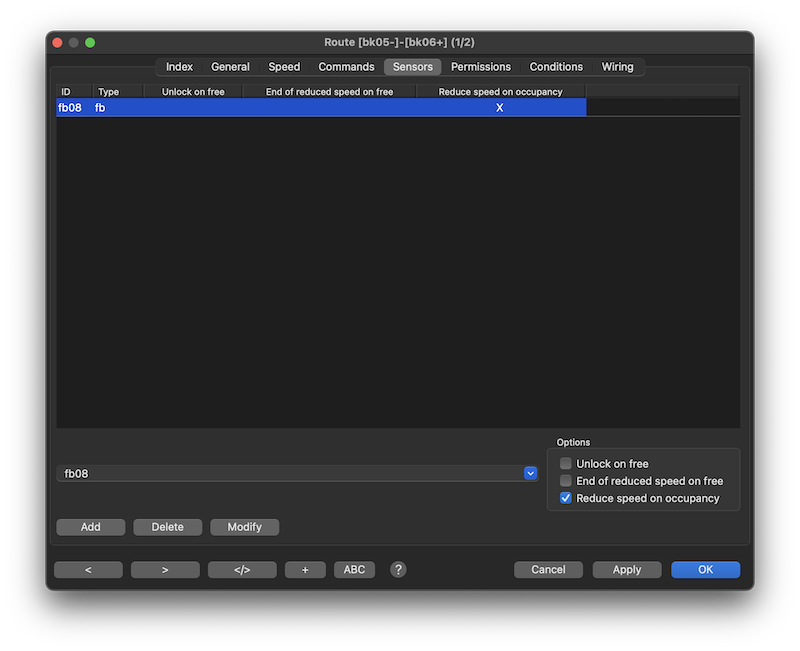 Route sensors and outputs are for detecting electrical occupancy with sensors located in between blocks.
In some cases not all sensors can be assigned to blocks and they can be used here to get an extra route 'free' safety.


The route can only be used if all listed sensors have reported "free".
Lost cars can be detected with route sensors.

With outputs the route can be locked/unlocked manually.

Sensors and outputs, which are in this route and not belonging to any block, should be added to this list.

The ID of the sensors and/or outputs must be selected and added with the Add Button.

If a sensor or output has been got obsolete for this route it can be selected from the list and deleted with the Delete button.

Take over the modify sensor options.

These options can only be used if all axes of locomotives and cars are drawing continuously current to prevent free reports too early.
Accidents can happen if this cannot be assured; Use with care!

Force unlock the route after this sensor has reported free.

End of reduced speed on free

Use normal speed, instead of reduced speed, after this sensor has reported free.

Without an activated option, the sensor also works like a Sensor without event in a block.