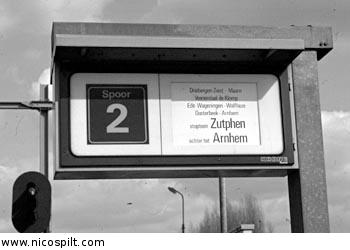 What Is A Schedule?

A schedule is a list of Blocks or Locations that defines a path on the layout (A block can be omitted in the Schedule, if that Block is defined as a "Crossing Block" in a Route). Rocrail schedules differ from railway time tables as every block or location on the the way has to be listed, regardless of the train should stop or pass through only. Blocks or locations which do not represent a regular stop (e.g. a railway station) can be be marked separately (cf. Regular Stop).

With schedules Rocrail moves trains from the start to the finish automatically. Schedules can be made to repeat, or to run another Schedule when they are finished.

Schedules let you define the strategic actions on the layout. You can define a "Mine train" that moves back and forth from the mine to the factory using a linear schedule, and a "Passenger train" that follows a looping schedule. Rocrail will work out the conflicts between the schedules, and share the layout between the two trains as they move from block to block following their assigned schedules.

How Do Schedules Work?

Schedules work by moving trains from one Block to the next in a list by using the Routes you have defined.

This means you must have Routes defined that Rocrail can use to run the Schedule from Block to Block.

Note that you do not select any Routes when creating a Schedule, only the Blocks on the list. But it will not work unless you also create Routes between each Block so Rocrail knows how to move between them.

With the mode of operation with block sides routes should be put on the schedule without direction changes, if the train will go back to first block: A→B and B→A,not A→B→A

You should test your Routes under Automatic Mode by using the Set/Reset Locomotive assignment, Define Destination and Start Locomotive commands in the GUI. Place a train in a Block, right-click on it and use these commands to make it move around your layout. You must make sure all turnouts and sensor events for each Route are working properly, and that you can move a train from one block to any other.

OK, here are some extremes, but they have common attributes…