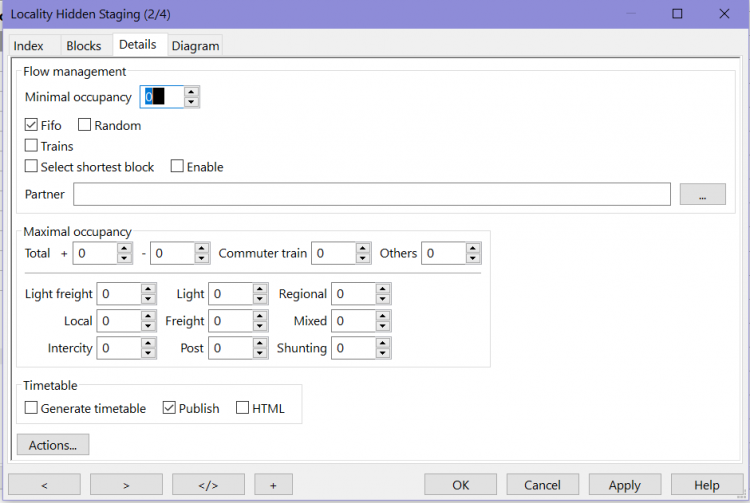 The flow management of a location controls outgoing trains and is very well suited to manage hidden yards: The minimal occupancy grants the yard remains partly filled while the Fifo option allows the trains to exit alternately.

The flow management is controlled by the following two parameters:

With hidden stations this allows to control the amount of traffic on the layout: If in a hidden yard consisting of five tracks four trains are always to remain the value has to be set to five (a train is allowed to depart not until five trains are in the yard). Rule of thumb: Number of trains to remain in the yard plus one. The maximal reasonable value is equal to the number of tracks in the yard.

In conjunction with Minimal Occupied (see above) this option will allow departing trains to regard the "First in, first out" rule.

Remark: After a restart the Fifo will be initialized; the order of entering before the restart is not preserved.
Remark: There is no Fifo without a Minimal Occupied greater than zero.

A random "Fifo" sequence is created at the start of a Rocrail session.

Remark: The last locomotive arrival time, is taken into account if Fifo is set without random.
Remark: Thus the block sequence in the location no longer plays a role.

Only locomotives with an assigned train are allowed in this location.

See: Select shortest block
Note: The "Enable" checkbox must be set to activate this option.

A free block must be available in one of the partner locations to be able to depart. Without an entry the option is deactivated.
The CSV list can be modified by the three dot button on the right. The will open another Locations Dialog for selecting partners.

Set the maximal occupancy in the location if it needs some free blocks to move trains without deadlocking. A value of zero disables the maximal occupied option.
This option can be specified for both enter sides.
The Number of Commuter trains plus Others1) should be set equal to the total.

Maximal number of commuter trains in this location. (Independent of the enter side)

Maximal number of none commuter trains, others, in this location. (Independent of the enter side)

Maximal number of a type in this location. (Independent of the enter side)

Generate a timetable on the fly in RCP format. This is also for use with MQTT and Node-RED.
In case of actions the %callertext% variable will be set with plain ASCII or HTML.

Tip: See the User page of Gerrit for a Node-RED implementation. (DE)

Publish the timetable to all clients.
Rocview will automatically popup Timetable dialogs if wanted. (No actions needed.)

To reset the schedules to the last position and size shown, the option Restore dialog size must be activated.
If this does not happen after Rocrail has been restarted, (then one time only) the popup windows will have to be closed manually.

Format the timetable in HTML for actions.
The receiving text object should have the HTML option enabled. 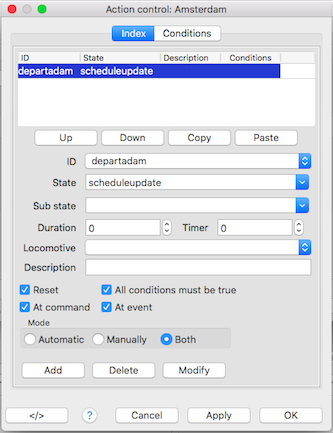 If a block is selected as sub state the first entry for this block from the timetable will be used to set the following text variables: 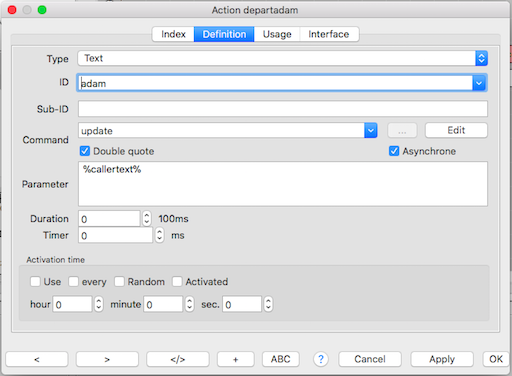 Put Rocrail in automode and start all locos. 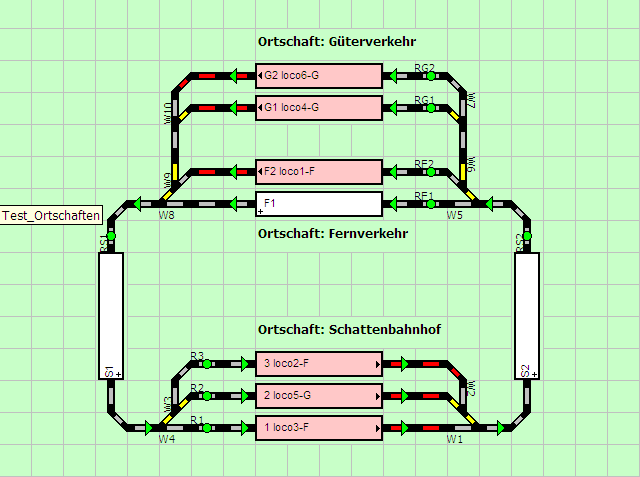 "Ortschaft" = Location
Put Rocrail in automode and start all locos.

With the XMLScript command "info" an overview of a location can be set in a Text object.

All loco's are checked if they have a schedule assigned, and the schedules will be scanned if blocks are in it for the selected location.