The Rocrail Server Monitor provides basic information and control over the Server with a WEB Browser. It runs in a light-weight HTTP server built in to Rocrail that you can browse from any computer that can reach the Server via TCP/IP. 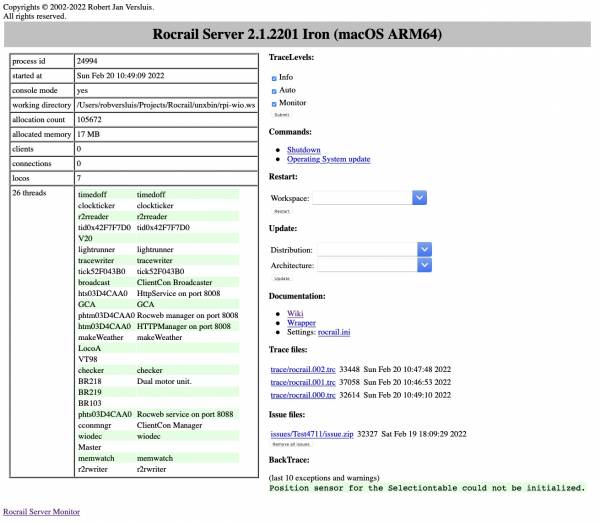 Common trace levels can be activated and deactivated.

After selecting this command, question will be asked if also the system should be shutdown (Linux only).

Restart the server in an optional Workspace folder (Linux only).
If none is selected it will restart in ~/Rocrail, otherwise in ~/Rocrail/<workspacefolder>.
The selection is a combobox so a none existing folder, relative to ~/Rocrail, can be specified and will be created.

Update the Rocrail installation according to the selected Linux distribution and architecture.

To test the Server Monitor, run a browser on the same computer running the Sever and go to this URL:

If you have changed the port, you should change the number after the semi-colon (:) to match.

This should work for all computers inside the same LAN, as long as the Server computer firewall allows traffic on the correct port.