The next generation of the Fiddle Yard

The thoughts behind the reality..

A Fiddle Yard is not, what most people like to think, something for large set-ups on shows etcetera.
That is not even remotely true, because compared with a standard shadow station, a fiddle yard claims very much less space.
Since it is possible (with HO scale) to make straight tracks (no turnouts needed !) at a distance of 40 mm ( heart to heart ),
it will reduce the required space to at least half of the size of its shadow brother.
And there are no 22 turnouts needed, including the driving coils or motors and electronic equipment, with saves also money.
If, like in this example, the moving part of the fiddle yard is 2300 mm (= 7.54 ft) long and there ar 12 tracks on it,
you wil have 12 times 2300 mm track = 27,6 meter (= 90 ft ) to park your trains.
And that all at a total width of 900 mm(3 ft).( including free space for the slider)

There was this old fiddle yard...

My old fiddle yard was reaching its point of getting old.
After 8 years of moving to many shows, assembling and dissassmbling, too many things were going wrong.
But to be frankly honest, it is completely restored and used now
in the 2-rail module layout in Modelspoor Groep Venlo MGV.
But this long life time has learned a lot about do's and don'ts.
So here are the step by step descriptions of the progress of building a new one.
Mainly the size and amount of tracks will be the same, I did want to build bigger, but one has to stop at a certain point.

It always could be more.
But everything I described here is possible for almost any size of fiddle yard, vertical, horizontal, z-scale, G-scale (like to see that one !), and anything in between.
Three different tasks are required to get it done.

For this new FY there is also a new concept to move it.
The concept is explained in many details in http://wiki.rocrail.net/doku.php?id=gca145-en .
That unit, suitable of controlling a stepper motor , and a solid drive set to connect the motor to the moving part of the FY, is all we need.

This picture shows the basic table. 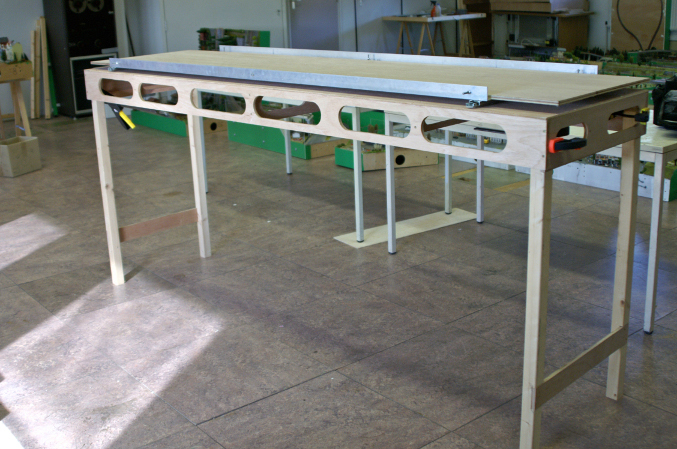 It will have a leg in each corner which can be folded and locked in the bottom, for easier transport and installation.
On top is the sliding part.
It is fixed on three drawer rails from an old metal office desk.
Some minor changes had to be made to these sliders, to make it possible to slide both ways (desk drawers only come out on one side!).
Important to mention is that these sliders should be mounted in absolute parallel position to ease the sliding.
In all triplex 12mm plates I made a lot of holes, and so cutting down the total weight.

The legs fixed to a turning point 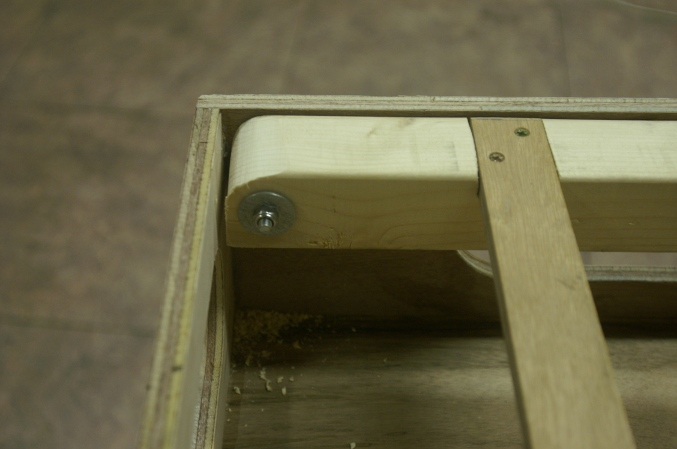 With a bolt and nut and a little pipe inside the leg, there is good turning point to make transport and building up as easy as possible.

The mechanical base is made with the gear wheel set, as remarked in the MGV145 page.
Using a rather strong steppermotor out of an old large tractor feed printer, it provides a nice slow and powerfull engine to move the whole 2300 mm table.
These pictures show how it looks. 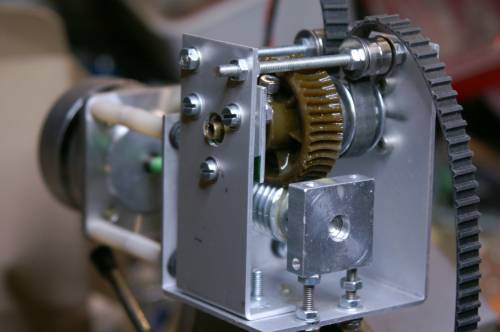 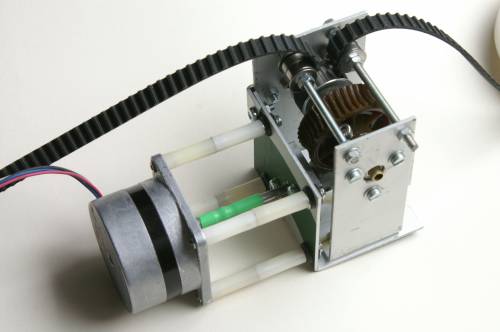 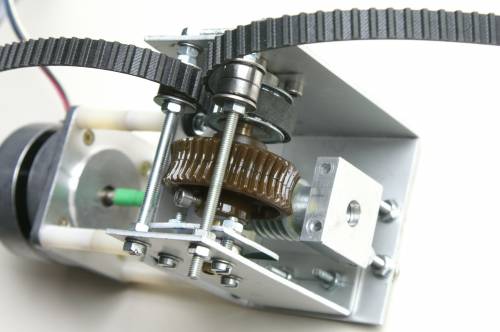 The motoraxle is connected to the gear wheel axle by means of a rubber tube (green part), to suppress the vibration which is generated by the motor.
In addition a ball is slided in the middle of the tube to make it more effective.
The motor is also mounted in 4 rubber tules, for the same reason.
A tooth belt (together with the appropriate wheels also ordered from Conrad), will be cut and connected to both sides of the fiddle yard sledge.
To make it possible to fine adjust the position of the axle, holding the large gear- and belt wheel, the ballbearings are mounted with a plate and three bolts and nuts, so they can be slided to ajust.
It is important to make the 'free moving space' as small as possible. In this example there was almost none.

After using this Fidlle Yard on a show in Gangelt (Germany) I discovered that rails were not always exactly in line.
This was caused by the fact that only one belt was used, which made it possible for the Fidlle Yard to 'turn'a little.
So I had to make a next step:

The 12 tracks each have 3 contact sections, to inform the computer program about the position of a train.
That means 36 contacts in total.
To avoid a lot of network hardware, and not to forget the awfull lot of wires,
I like to combine this to only three contacts at all, meaning that I have to switch from one rail to the other.
Rocrail, as the most ideal program for this, is made to do it that way.
But using relays to switch all these contacts is much more complicated than the needed feed-back hardware.
So, another solution, in a typical modelrailroad way, is created.
I had to strip an old Maerklin coach from ist wheel sets, and use these to ride upside down over a rail. This rail is just as long as the width of the moving part of the FY.
The picture explains this clearly.
The rails move with the FY slider, and the wheelsets are stationary, fixed to an alu strip with a spring, to be sure it contacts correctly. 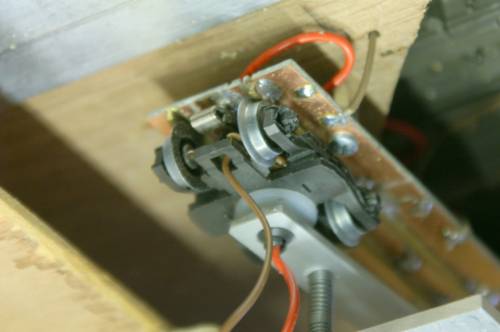 This the wheelset (including ugly slider), providing a double contact switcher with 12 positions. 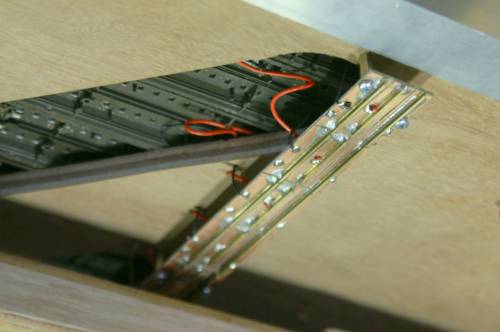 The three rails are soldered on a Pcboard, and after that, all cut in 12 pieces including the copper layer, but leaving the pcboard in one piece.
The FY is equipped with two of those slider sets, giving in total a 4-pole switch with 12 positions.
All four contacts are connected to GCA145 (three for rail sections and 1 for midrail (or left side in 2 rail systems).
These contacts could also be connected to separate feed-back unit like GCA93.

Because this fiddle yard is moved with a rather low speed, the power is pretty high.
And because this fiddle yard will be exposed in public on shows, it could be harmful for anyone who is getting too close to the moving table, specially for children.
For that reason, an extra safety system is made to stop the motor, when
one or more little curious hands are too close.
This is done by a conducting strip along the side of the front, with a steel wire close to it.
The strip is connected to boards ground( ICSP1 pin5) and the steel wire is connected to ICSP1 pin 3).
Touching this wire will immidiately stop the engine.
Resetting is only possible from the side that is not accessable for public.