This Selection Table Controller is based on a steppermotor.

This pictures shows the version with a dual 7-segment display. 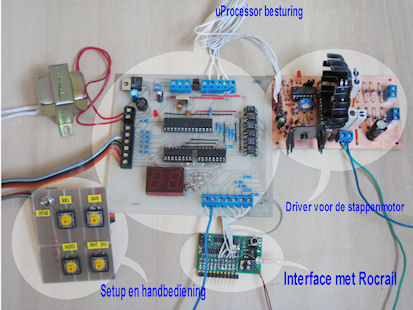 The firmware is developed in the program language Basic. The application used is: PIC simulator IDE with an integrated simulator (emulator), Basic compiler, assembler, disassembler and debugger it is a Windows application ; for an evaluationcopy see: www.oshonsoft.com

When powered on, the software moves the Selection Table to the start position and acivates the begin microswitch.

Firmware source, schedule and board (KiCad):

All buttons for manual operation and setup are to be connected to P2 of the controller board.

The power for the step motor driver, P2, should be DC, 1A and between 5 and 10V. Try which give the best result in power end smoothness.
For the FY controller, P4, a simple 9V AC trafo can be used. Use a cooler for the 7805 in case of higher voltage.

The 7-segment display can be replaced with a LCD display:
No automatic calibration, the middle position is the calibration position.

This needs other firmware.