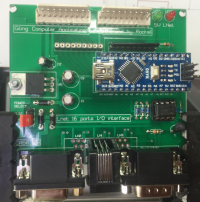 The GCA50a is functional equal to the previous (and still satisfactory running) GCA50 and GCA185 boards.
But with the more and more popular Arduino processor boards, specially here the Arduino nano, it was obvious that it would introduced for LocoNet as well,
Firmware sketch, developed by several enthousiast software writers, is all in open source available.
Special thanks to Dani Guisado in Spain who also tested this board for his own use in CLUB-N-Caldes.
See http://www.clubncaldes.com/2018/11/testing-peter-giling-gca50an-for.html
GCA50_AN has a few nice extra's compared to GCA50.
First the software is reacting much faster compared to GCA50.
Second, it fits in a standard LDT-1 box, available from Littfinsky.
And third, the GCA50a can be used with the SUB-D-9 connectors, like the GCA50, but also can be set up with standard LocoNet RJ12 connectors.
Even a conversion between SUB-D9 (male/female) and one RJ12 connector is optional.
In configuration there is no significant different between GCA50 and GCA50a.
Please refer to LocoNet I/O programming.
Important note:
There is only one unfortunate disadvantage of using a Nano for this solution: Port 10 is only available as OUTPUT, INPUT does not work.
This means that either just forget about port 10 when used as input, or choose GCA50 or GCA500.

GCA50a can be powered in two ways.
Since it is not possible to combine these two options, a jumper JP1 is on board.
First option is supply via RJ12 LocoNet.
This is the railsync (DCC) power, standard in LocoNet systems.
But you need definitely a booster or central system connected to LocoNet, to have this power available,
The other option for supply is using the 12V via D-connectors. The jumper itself has indication on board which one to choose from.
Unlike the GCA50, this unit has a newer way of supply.
Basically, there was nothing wrong with the well known LM7805 linear regulator.
But when a bit more current is drawn from this unit, the regulator gets pretty hot.
This means that quite a bit of power is converted to heat, so it is not very economic.
The new R-78E switching regulator here is capable to supply up to 1 Amp at 5V without hardly any power loss.
It can handle up to 1 Amp continuously without problems.
But still , it remains possible to use the good old (and cheaper) 7805.
To do that, fix it with fastener and nut, and use extra nut between pcb and regulator,
to create better cooling.

This zip file contains all needed firmware for Arduino Nano.
Peter Giling will not discuss any comments on this sketch.
N.B. All Arduino related kits will not be programmed.