Rocrail is a Project that can control a model train layout from one or more computers. You can run trains directly from your computer, and you can have the computer run trains automatically for you. You can even have some of the trains on your layout running automatically while you control others by hand.

Rocrail uses 2 main programs, a Server and a Client. These programs work with each other using Internet protocols, and do not need to be on the same computer. You can use Rocrail from a single computer connected directly to your layout, and you can also control your layout from any computer on your home network, or over the Internet. Rocrail also has a web interface, which will let you run the layout from a web browser such as Firefox.

The Rocrail Server (Rocrail) runs on a computer connected to the layout by one of the standard computer interface setups, and supports many controllers such as Märklin's 6051, the Uhlenbrock Intellibox, Loconet, SRCP connections such as DDL/DDW and more. See the complete list of supported controllers.

The Rocrail Client (Rocview) connects to the Server over your network. Rocview can also be used by itself to plan layouts. You do not need the Server or the layout to be running to edit your plans. Plans can be uploaded to the Server after you are done creating them.

And Rocrail runs under Mac OSX, Windows and Linux.

Imagine having your layout running, and moving anywhere around it with your wireless laptop while you still control it. Imagine sitting on your couch using the laptop on your coffee table to control your layout on the far wall. Imagine setting up a webcam to show the layout through your web server, and letting your friends control it from their own homes using Firefox.

Rocrail does all this, but it does more.

Rocrail allows your computer to run your trains automatically, using the Blocks, Routes and Schedules you set up. With Rocrail you can have complex patterns where an Express is running every 10 minutes, and other trains are moving through the Express line's track randomly as they go from one point to another and another. All with Rocrail sorting out the conflicts and preventing collisions.

This diagram shows the different elements that make up a Rocrail layout: 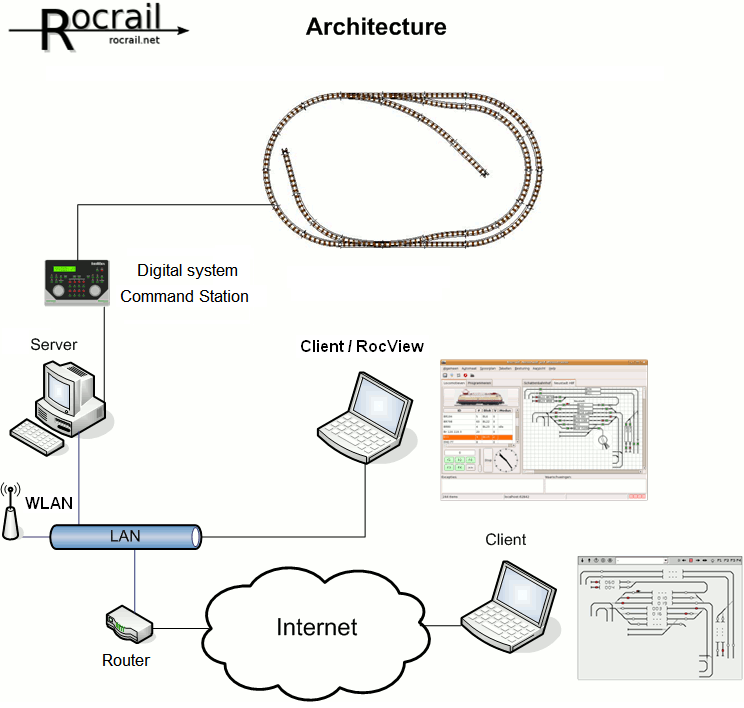