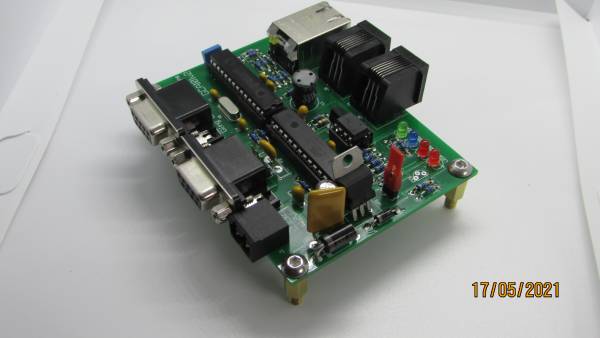 For the previous version of GCA101 please refer to this page

GCA101 was ready for an update.
Since dc power supplies are getting cheaper, this unit did not desire a special on-board power supply any longer.
So the new design is smaller and fitted with a very compact and good quality switching regulator for the 3.3V.
Furthermore, the complete design is only changed where it comes to power, resulting in a smaller unit.

Only dc power is allowed.
Power supply : 12Vdc minimum 3 Amp.
GCA can provide you with a good and small 230V to 12Vdc supply.
Please refer to pricelist.

The GCA101 is equipped with a special Ethernet connector.
It provides an electric isolation , which means that computer and your trains are not electrically connected together.
The standard Ethernet cable can be one of the two types. Either normal or 'crossed' cables are useful.

Connecting GCA101 to PC is best done by means of a router in between.
So your home network will be one way to do it.
If you do not like this situation, use a dedicated cheap router for it.
Direct connection GCA101 to PC is possible but requires a lot of experience with networking.
One important mark to old left-over routers:
Routers previously used at home with your previous Internet/ Tv provider, will experience problems with connection via UDP.
This is probably caused by the UDP channel inside the router, which should be opened by passwords/codes/pin numbers.
In this case, that router is unuseable.

One other problem might cause no connection in Windows.
The ethernet module in you pc might be not the only one.
In that case Windows sometimes Has a proble to decide where LocoNet communication should be sent to.
Best way to solve this, is tot find out which inside ethernet adapters are not used, and shut them off in Windows.

Two processors on this board are installed.
One to connect Ethernet to the standard SPI and the second as interface between SPI and Loco-I/O.
The unit is equipped with two Loco-I/O RJ12 connectors and two D-con-Loco-I/O connectors.


Unit is available as board only or as complete parts package, including programmed processor.
Ready built units will not be available.

Thanks to Robert Evers & Fred Jansen who have put much energy in getting the system up and running, you will finally be able to run Rocrail and Loco-I/O without USB and/or RS232.

This is the most recent .hex file for U1

The GCA101 is provided with a programming connector ICSP1.
To program the Atmel chip you will need a programmer.
A programmer with suitable software is the mySmartUSB-light.

On Linux flashing the firmware is easy with avrdude:

The programmer ID is "mySmartUSB-Light" firmware version dependent: stk500v2 or avr910/911.
For Windows, just use the software which comes with the mySmartUSB-light. 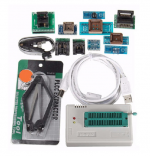 One other programmer, which comes with a very large library wfor many different branches and types (including all Microchip processors) is MINIPRO TL866A.
At this moment available from GCA.
Ask Peter

The three green leds in front are indicating different functions.


Current source, what is that?


GCA101 also can be used with TCP.
The standard address fior that is 192.168.0.100.
Processor should be changed to ATmega328P.
Software is developed in Spain by Dani Guisado.
Firmware is downloadable here: ​https://github.com/ClubNCaldes/GCA101LbServer
Website of Dany is also interesting : http://www.clubncaldes.com/

The communication between Rocrail and the GCA101 is by the User Datagram Protocol. Therefor only the LNUDP LocoNet interface type is supported.
Setup Rocrail with the exact values shown below except for the Local IP address which is in most cases not needed.
The GCA101 own IP address is not used in the Rocrail setup.

This is the Multicast address to use for communication and must be set to the FIXED value of 224.0.0.1.
– The All Hosts multicast group addresses all hosts on the same network segment. –

The service port must be set to the FIXED value of 1235.

LNUDP is used as standard.
With different processor and firmware (see : https://wiki.rocrail.net/doku.php?id=mgv101-en#new_development_for_gca101 ), LNServer
is possible with TCP address 192.168.0.200.

Only required if the PC has more then one network interfaces installed; In all other cases: Leave empty!
IP address of the PCs network interface which is used for communication with the GCA101 to make sure the traffic runs on the right one.