The standard available booster bus topologies in the market have the undesired behavior of shutting of all, if one booster experiences a short circuit.

The idea was to make individual inputs on each connected booster to be able to switch them on / off separately.

This could only be achieved with additional in and output to the booster and a program to make it possible.

Rocrail is the program which supports all these features, and since all MGV/GCA units are more or less based on LocoNet, this LocoNet should be part of the booster.

The next problem with boosters connected to Loconet thus RailSync, is that they are getting a DC output over the RailSync lines when a General Power Off is given.

This causes problems with some decoders, which are switching back to analog control and thus running away in high speed.

This booster is also taking care for that. Within the 30 mSecs spec, after the Railsync pulse has become DC output, the booster shuts off output.

An internal short circuit detection is provided for maximum security, which switches off the booster and signals the problem via LocoNet to Rocrail.

There decision is made if all other boosters should be switched off.

LocoNet is a trademark of Digitrax, Inc.

The complexity made it necessary to design in double sided. However, only a few -easy to reach- points have to be soldered at the top layer. 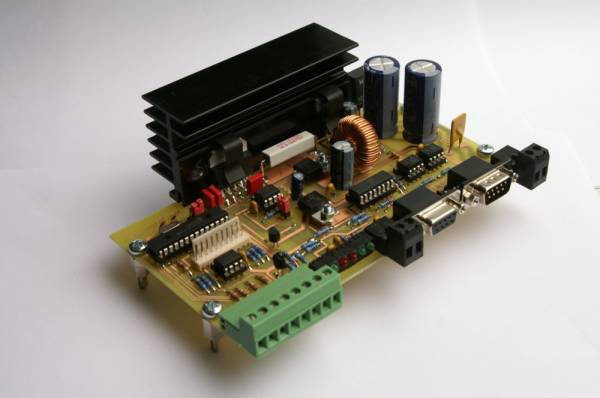 In this latest test version V2.1, a solid cooling devide is used.

Short circuit indication (p14) needs to be set to block, since output is flashing.

Use the Programming Dialog to setup the I/O.

The best suitable cable is Cat 5 Ethernet cable. For all cables together a maximum length up to 200 mtrs is allowed.

Standard full wired male to female 'extension' Rs232 cables are allowed, but will cause problems when many of them are used.

However, a few do not disturb the communication.

The parts positions are visible at page four of pcb files.