A Fiddle Yard, traverser type, is a collection of model railway tracks that are invisible to a viewer and allow trains to be stored and manipulated.
But because of its "high tech" nature it is an eye-catcher for the public on every event.


"The simplest way of setting up a single track single ended fiddle yard (at least with regards track usage) is using a traverser. The traverser slides from side to side to allow the appropriate track to be lined up for the arriving or departing train. An optional section of track allows a locomotive to be held beyond the traverser. This method uses the least amount of track and fits the largest number of trains into the shortest length. Disadvantages to the method are the relatively complicated mechanism to operate the traverser and the difficulties of track alignment and powering of the track on the traverser."
(Quoted with permission of author.) 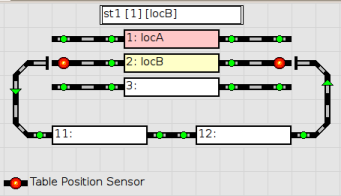 Realistic view of a Fiddle Yard. 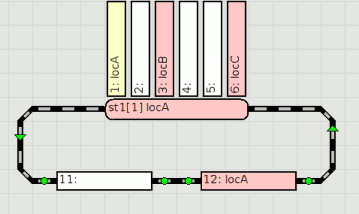 Alternative view of a Fiddle Yard without position sensors and hidden block sensors. The length of the symbol is calculated by the NrTracks attribute.

Five outputs are used to signal the Fiddle Yard's decoder the wanted position, and one input for letting Rocrail know it has reached this position. Only after this events the train will get velocity commands; in other words: All train movements are pending to this event.

In the Rocrail logic it is a mix between a switch and a turntable and is also to be locked for using it in a route.

The routes setup is no more difficult than normal ones, with the only difference that a track must be selected as a command. (See turntable in auto mode.)

The Rocgui representation is at this stage simple but useable: