What is Function Mapping

Foreword 0: as described in the wiki, the settings are only saved if the "Description" field contains an entry!!!
see Description

Foreword 1: the function zero (function "F0") has a special role. It is intended for the "light" function and there is therefore no way to redirect function number zero to another function number (mapping).


The following function number assignment could exist for three locomotives:


One possibility is to define yourself one function number list that should apply to all locomotives.

In this example, the function numbers are to be used as follows:

The following requirements are made in this description:

Prerequisite is however: function number 32 does not occur in our locomotive!

How to configure a function mapping?

Special feature: Rocrail processing time is saved if a zero is used in the mapping for the same function numbers for handheld and locomotive: fx = 0
Example: handheld control # = 3 "whistle" and our locomotive fx = 0 "horn 1"

In this example, button 9 on the handheld controller should be the "shunting gear" for all locomotives;
- our new locomotive uses function no. 24 for the shunting gear;
- the mapping fx = 24 is then entered in the properties of our locomotive for function # = 9. 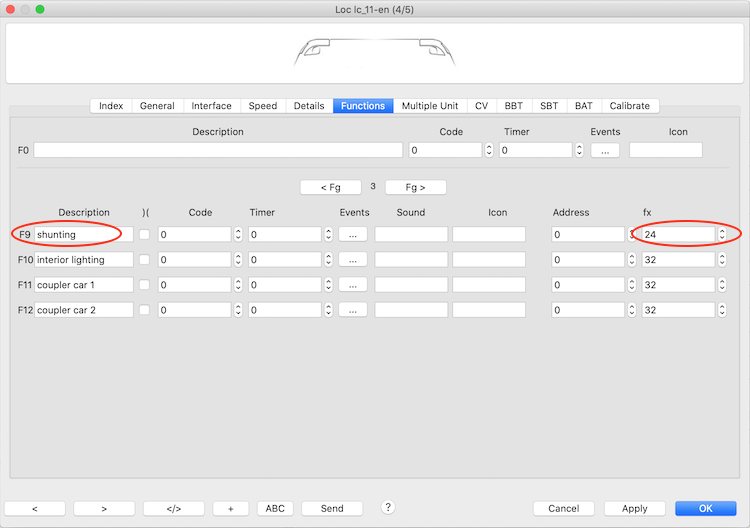 As for a locomotive, a function number list for a car can also be specified …

… and if necessary it can be incorporated into the function number list of a locomotive. (see "coupler car 1" to "coupler car 4" in the table above).

Mapping at "Locomotive with train"

The functions of "Locomotive and Train" have now been defined on the handheld controller.

n each car there is then the option of redirecting the hand controller function number to a car function (mapping).

With this configuration the functions of the locomotive can be operated, the two cars can be uncoupled individually and the interior lighting can be switched on and off in all cars at the same time.

Mapping to address and function number

The function definitions for a locomotive and two cars listed in this documentation should be checked for their validity in several tests. For this purpose, the train "op_51-en" was coupled to the locomotive "lc_11-en", which consists of the two cars "car151-en" and "car152-en". After clicking a function button on the handheld controller, the result was read out in Rocview's controller trace window and documented here.


Preliminary note 1: Addresses are used for an MBUS controller:

The locomotive doesn't do anything, but all cars should activate the "interior lighting":

The locomotive doesn't do anything, but car 2 should activate the coupler:

The locomotive doesn't do anything, but car 1 should activate the coupler: