Multi Colour Led controller with Arduino Nano and G-ASH03 board. 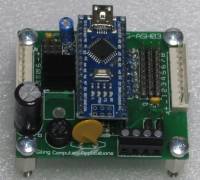 Th G-ASH03 board unit an Arduino nano on board can be used for various applications.
Originally designed for controlling 12 servomotors via DCC or Motorola commands,
Here we have a very nice task for this board as well.
The multicour intelligent leds are available in wide setup ups like bars, LED strips, 64 LED boards etc.
To control these LEDs with integrated chip, it takes at least an Arduino nano, but it enables you to control all kinds of colours in each led separately, using only three wires.

Fred Jansen created firmware for the Arduino to control these LEDs via the Rocrail Dumper library.
Control is established via a controller setup in Rocrail, using "dumper".
Basicly, all you need is an Arduino Uno or Nano board and a sufficient supply of 5 Volt.
Also the G-ASH03 board gives you a very nice start with the multicolour LED adventure.
Rocrail, starting ad version 15816, is ready for it!

The firmware date, yyyyMMdd, is shown in the Rocrail trace after connecting to the Nano:


G-Ash03 by itself does not need much power, but the leds ar drawing plm 50mAmp EACH when lit full intensity. This makes the need for a good power suplly.
G-ASH03 is equipped with two voltage regulators, originally the same L7805.
But for the leds we need more, so for VR2 we use a HW-613 power supply, wich fits at the same place,
and can deliver 5V by 3Amp., where the power to the G-ASH03 can be max 24V dc OR 18V ac.
Supplying the Ledsstrips externally with 5V is also optionable..
If you need advice, please ask Peter


Ledstrip is connected to servo1 connector in the following way.

The correct type needs to be selected via a special command to the Arduino Nano.
Please refer to the command manual provided below.

The leds on these strips can consume max 20 mA EACh.
This depends partly on the intensdity to be used.
With 60 leds in one strip the total curent will be 60 x 3 x 0,015 = approx 1 Amp for each colour.
Practicaly, the G-ASH03 can handle one strip 0f 60 leds.
With a supply ogf 24 V a total current of 0,5 Amp is needed for 60 leds.
In case of higher amount of leds, extra power suplly is needed.
GCA will come with highr current systems in due time.