The advantage of running your trains digital, is that the installation of a reverse loop is rather easy.
In analog systems we need to switcxh polarity of the whole layaout, when we are leaving the reverse loop.
In digital setup, only the loop itself needs swapping polarity, since this palaruity is not important any longer for
the decoder in the train.
Many railroaders have problems with reverse loops.
The majority in available units for this purpose are working with a short circuit detector
It does not need any explanation that this would be rather destructive for your precious material.
This unit gives a far better solution for this situation.
It also provides a choice of three different ways of activating the polarity reversal.
1) the use of four current detection sections, where many rail cuts are needed.
2) 4 Hall sensors, but that needs magnets under all loks, entering the loop.
3) Let Rocrail do the swap, just by making a (virtual) turnout and add it in the routes that are entering or leaving the loop/

It is provided with several feed-back outputs to connect GCA50 (LocoNet), CAN-GC2(CAN) or GCA_PI02 (RocNet).
Option 1 and 2 , as mentioned above, will provide the correct switching for your reverse loop, when trains are running manual mode.
4 current detectors and 4 hall sensor connections are on board to enable correct swap of rail power lines.
2 extra current detectors are on board to get a rail occupied indication inside the loop.
Opto couplers are on board to separate rail power from Loconet.
With different firmware in U2, the unit can be used with one single command from LocoNet/CBUS or RocNet.
Auto reset multifuses are on board to protect current sensors from overload in short circuit situation.
The standard 10 pin header connector is compatible with the 10-pin connector on GCA50 (LocoIO), CAN-GC2 (CAN) or GCA_PI02 (RocNet)
One output is available, which makes it possible to change the position of the turnout via GCA50 (LocoIO), CAN-GC2 (CAN) or GCA_PI02 (RocNet)
This is mostly useful when the loop is used in manual control, with certain turnouts, which definately need to be in the right poaition before a train can pass.
The turnout is always set in the right position, just before the train reaches the turnout.
On remark on that: you should take care that the turnout driver is fast enough to make sure the turnout is in correct position BEFORE the train arrives there.
A bi-stabile relays is used, to avoid problems after power off/on.
Relay will stay in last chosen position, and on power on, the GCA102 sets itself in the last used postition before power down

How does it work ?

3 different railplans for connection
The blue lines show, where the rails should be cut.
Each section should have at least the length of the longest Locomotive used.
The longest train should fit between points C and E.
There are 6 sensors , all direct available as output on J2 ( for connection to GCA50 or CAN-GC2 ).
There are 4 sensors needed, to make this work: 1, 2 5, and 6.
As explained obove, these sensors are current sensors, reacting on a train that enters that area.
Lets assume the turnout is set to 'go right'.
The first sensor then is sensor 1.
This part is still part of the normal railway., but when sensor 1 is activated, it will inverse polarity of the
whole loop (including sensors 2-5) in such a way, that the polarity matches when the train is entering sensor 2.
Sensor 2 will also have the same effect as sensor 1, but since that situation is already set, nothing will change.
When the train conntinues it will enter sensor 3 and 4, which have no further effect for this unit.
It is important to realise that your longest train should fit totally within the length of sensor 3+4 together!
If that is not possible, you can NOT use this unit!
When train enters sensor 5, the whole loop will be polarised to match with sensor 6.
Also the output tc will change , which can be used in LocoNet or CBUS to change the turnout position.
This is specially very useful when you drive manually.
Entering sensor 6 will have the same effect as sensor 5, so there will be no change.
This sequence also works if a train enters at sensor 6.
Sensor 3 and 4 could be used as block feed back detectors

GCA102 was originally developed to be used with current detectors.
A very realiable system, but there are other options.
In the mean time, there is a growing interest in using hall sensors.
The disadvantage of the need for a magnet under the front of the train, might be very little.
This because there are cheap, very samll and very strong neodyne magnets .
With the use of hall sensors, the GCA102 will be a bit cheaper, because opto-couplers and
rectifier bridges are no longer needed.
The third option is possible thanks to Rocrail, but needs a slightly different program in U2:
It is possible to program a (virtual) turnout in Rocrail and command it in the routes that entering or leaving the reverse loop area.
Simply connect GCA102 J2 point 1(5V0,2(0V) and 3(port x) to GCA50/CAN-GC2 or GCA_PI02.
Then the port, which is connected to pt 3, should be programmed as turnout switch (single output.
Program this turnout in the route > commands, and Rocrail will take car for it.
This third option is only easy for automatic driving, in manual mode you need to be attended to
always switch the reverse loop relay in correct position.
Version V3 has a special jumper to be set in this case. GR!..GR6 can be omitted.
For Version 3 there is also an option to use it commanded by GCA50/CAN-gc02 or GCA_PI02.
Two ports are used, port 1&2 or port 9&10 (in case GCA_PI02, also port 17&18 and port 25&26 are optional).
The ports should be configured as pulse output, like a normal switch with two coils.

These files correspond with the latest version V3 (Green pcb).

This (red) board is also equipped with two connectors for Hall-sensors TLE4905.
On each connectors, two hallsensors on each side should be connected parallel.
There are a number of parts no longer needed, if GCA102 is used with hall-sensors only (instead of current detection).
A few parts has to be different like this picture explains.
This partslist is made for use with hallsensors.
Hall=sensors at each side of the loop should be connected parallel.
Be sure that a train, approaching a rail separation, first activate a hall-sensor.

This unit is equal to version 2 except for the following extra's:
All 4 needed hall sensors have a separate connector.
An extra jumper is added, needed if unit runs with hall sensors and no bridge rectifiers are used.
The other option here is to use board only for its relay function.
Control it from GCA50 or other I/O units with puls control like switches with coil control.
Board needs 5Volt supply to pin1&2 of J2, and pin3 and 4 are control inputs.
See partslist for GCA102V3
Hall sensors should be positioned at each side of both rail separation cuts., with a distance so,
that one of these hall sensors is activated BEFORE first wheels are touching the rail cuts.
H1 and H2 are positioned at both sides of separation cut left,
H3 and H4 are positioned at both sides of the other separation.
Simple tip: If you experience ALWAYS a short cut when train is running into the loop, there are 2 simple solutions:

One of these will be your solution.

When GCA102 is connected to one of these boards, it is important that first 7 connected ports
should be programmed as input !
Refer to this table:

The very simple program is written in PicSimulator IDE basic

Always one of the two led is constantly on, depending in which polarisation position the unit is.
Just to show that the board is active, the other leds will flash with a frequency of approx 1 Hz.

** IMPORTANT NOTE !!!!!! Some users seem to know better, and solder wires directly to the pins or the pc-board.!
That is totally unacceptable !!
Wires will easily break off, and cause a lot of damage in many cases.
If uyou use it this way, there will be 0% guarantee one the unit.
So use connectors !!!!!

For buyers of complete packages, there is a special offer: This special plier will be sold for net price of € 20,00 if ordered together with complete kits. 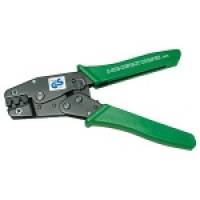 Buying this , it will save you much trouble.
Plier is used with all LocoNet, CBUS and RocNet modules of GCA.

This unit can also be used as a stand-alone for your layout.
Please consider it is NOT suitable for analog train control.
Only digital systems can be used.
For stand alone, the unit needs ONLY 5V supply connected to J2. (max 30 mA)
All 6 feed-back points are also connected to J2 and can be used for external indication
The table below explains all connections.
Pin #1 of J2 is marked.