Quite a few systems are available now to detect the Loc, passing a certain area.
Most of them require extra construction inside a loc.
Sometimes, it is already available in the decoder, like Lissy or Railcom.
But to receive these messages, it requires quite some expensive hardware.
One other system , Maerklin's MFX is also nice, announcing the train to be on the track, but it does not give
any information about the exact position.
The wheel-counter GCA141 together with Rocrail, is a system that will tell you at least
that a train has entered completely into the block.
But then, placing the IR transmitter and receiver is a very precise job, maybe not easy to fix for everyone.
All the other systems do not give you any info about if the complete train has entered the block, without losing
some wagons or couches on the track.
This of course unless you will build-in Lissy transmitter or an extra Railcom decoder and/or have the wagon/coach
equipped with some way of drawing current from the rails, where the current detection on the track will pass that information to the computer.
Reed-switches were very popular long before the digital era was emerged.
But due to the very limited possibilities of magnets, and the fact that faster running trains sometimes 'missed' the
reed-switch made the use of it less popular.
Even now, while we have many other ways of sensing the train on the track, a reed-switch might be sensible to use.
But we have a better, and much smaller option now : Hall-sensors.
These sensors, like the TLE4905L as described here,
are very small items, even usable for N-track, because this sensor only measures 4,2 x 3,3 x 1,5 mm.
It even can be inserted inside the gravel, making it totally invisible.
The other advantage we have now, is the availability of very strong and yet very small Neodynium magnets.

This sensor is 3-wire connected and could be connected directly to a CAN-GC2. or GCA50.
But why should we need this extra GCA173 ??
First of all the connection itself, This pc-board makes that much easier.
Than the pull-up ohm either GCA50 , CAN-GC2 or GCA-PI02 is 10K ohm, which should be much lower to have a solid distortion resistance.
Also a capacitor of minimum 47 nF is needed, conform the data-sheet.
CAN-GC2 needs pulses from feed-back with a minimum lengt of 25 mSec. For GCA50 even the minimum is 80 mSec.
The GCA-PI02 needs minimum of 10 mSec.
That makes them practically not suitable for this hall-sensor, or worse, a reed-contact.
To explain that let us make some approximate calculations. :
If we have a distance of 5mm between magnet and hall-sensor, the magnet will activate the sensor for a length of approx. 7mm.
A HO train, running in scale 120 km/h runs in reality 380 mm per second.
If the sensor only 'sees' the magnet for a length of 7 mm, the time the sensor is activated is 7/380 = 0,018 SEC = 18 milliSec.
A pulse like that is bound to fail, because the pulse will be only 1/4 of what we need.
The CAN-GC2 and GCA-PI02 are better (=shorter) but still way too critical.
GCA173 is here to take care for that
It has connectors for 8 sensors, either hall-sensor or reed-switch.
A small and cheap microprocessor on GCA173 checks continuously all 8 inputs, and will react when one or more inputs are going low, to forward this signal to either GCA50 or CAN-GC2.
Even if the input is no more than 2 millisecs, the output will remain high for 150 milliseconds, assuring that the message is passed correctly to your LocoNet or Can-network.
The hall-sensor itself is much faster than that (approx 1 uSec), so the chance that a train will be 'missed', is 0%.
One other extra advantage of using the GCA173 as a buffer, is that we will have enough connections for all eights sensors.
In case of direct connection between CAN-GC2(GCA50) and 8 hall-sensors, you will have to combine all +5V and 0V connections of the sensors together.

The big advantage of this system is the fact that you will be able to detect if the train has entered completely into the block.
As you are used from Rocrail, this fabulous program also does have a standard setting for this sensor, called 'Wheel counter'.
Except here we are not counting wheels but Magnets. But the result will be the same.
At least two magnets should be mounted under the train, the last one under the last wagon.
When these magnets have announced themselves on entering the target block, the conclusion is safe to assume that
nothing is left behind in a tunnel or shadow station, so the computer will proceed with clearing the used route and use it again.
The sensor itself will be programmed as 'wheel-counter' in Rocrail.
Rocrail will automatically use this counter after the first initiation, and take over this info,
If you like, more than one extra magnet is an option, even different trains with different number of magnets is an option.
With that installed you could even distinguish which train did come in, but that is an option, not yet available in Rocrail. (Is not planned.)
Commuting trains should be equipped with at least two magnets, so sensors will work in both directions,
and make the train stop at the first detected magnet.

One other interesting option with these sensors:

Using Loc-combinations, where one is a s.c. 'dummy-loc', which is not taking any current from the track, this combination might stop too late, where current detection is used and the dummy is in front.
The use of two magnets -one at each front- will solve this problem simple and easy.

Rocrail compares the counted wagons from the From with the To block:

A nice double sided board, with through hole metallisation and silkscreen print is available now. 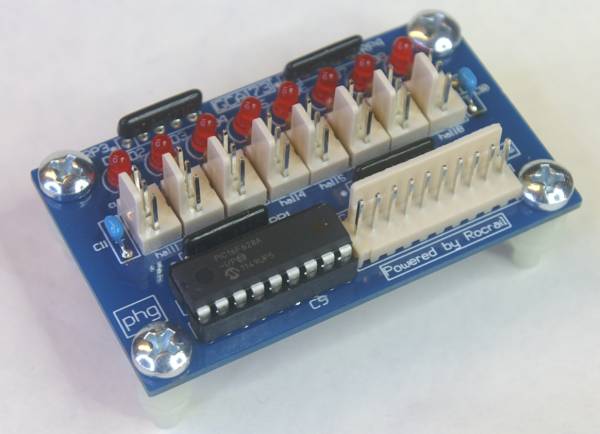 A large variety of magnets is available from www.phgiling.net:


Magnets are only sold in sets of 8 pcs per size.

Magnets have two poles, of which only one will activate the sensor.
Before putting magnets on your rolling stock, please check the correct position.
This can be done by checking with a sensor itself.
Sensors should be with marked (rounded) side facing towards the magnets.

These very strong NeoDynium magnets are no toys !!!!!
In principle they are safe by itself, but please be careful with these magnets , do not allow children play with it.
There are quite a few safety remarks, downloadable here : Neodyne safety precautions

The connection wires between Hallsensor and GCA173 can be up to 6' or 2 meter.
Please be careful not to feed those wires parallel with rails and rail wires.
A bit of twisting these wires will inprove protection to any distorsion.
If that is inevitable, keep a distance of 4'' (10cm).
Straight angle crossing is no problem.
Below you can download a drawing of hallsensor connection.

The #1 leg of the tle4905 connects with #1 connector to the gca173, the "1" inscribed on the psk-connector facilitates the correct installation!

Allthough GCA173 can work fine with reed-switch as wel, the option for wheel counter is NOT applicable.
This due to the fact the the number of pulses, generated on the passing of a magnet is never the same, and unpredictable.
connection to reed-switch

gca173_v1_4_firmware.zip
This latest 1_4 version is published, because it has a more accurate timing before resetting the output.
Timing is close to 80 mSec.
gca173_v1_5_firmware.zip
Version 1_5 has a better startup sequence. It will send all actual sensor positions