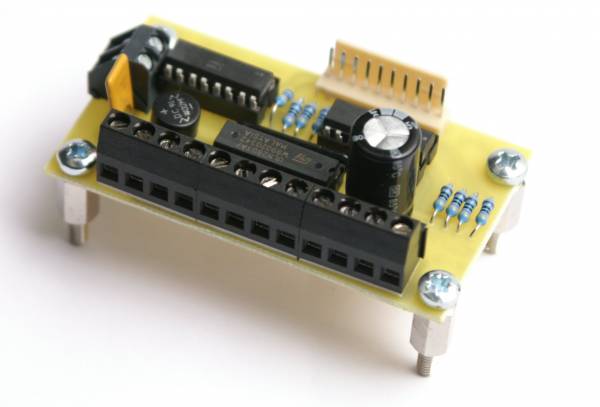 - Opto-coupler isolation between Loconet and outputs.

- Also to be used as light switch.

First question may is: why should we use interface and MGV50 LocoNet, since there are turnout decoders available that connects straight to the rails, and will be commanded by either Motorola or DCC commands.

There is a simple argument for that.

If you ever used turnout drives , commanded with Mot. or DCC, you also will have seen that everytime you, or in our case Rocrail, switches a turnout, you can see that light in Locs are flac=shing, due to the sudden drain of power from the rails. And the longer the connection between central station and the turnout decoder is, the lower the available power for that turnout will be. Since we did not like all these signals, we prefer a separate supply for turnouts. This supply is even not used for anything esle on the railroad track i.e. lights etc.

In that case it is better and far more reliable to send commands for tuernouts and signs by means of LocoNet.

GCA50 can only deliver 5 Volts and max 25 mA on each output which is suitable enough for connecting LEDs and small relays.

Turnouts and arm signs with coils use much more power, in voltage and current, than MGV50 is capable to supply.

For that purpose the first available interface is MGV77.

It is a good interface for using with low current turnout drives, mostly in N scale systems.

On one side (top on picture) it is connected with MGV50, by means of 10 wire cable.

At the bottom screw terminals 8 outputs (4 turnouts) are to be connected.

An addional power connection needs to be connected to transformer/adapter 16V ac or dc, or to rail power.

Optocouplers on board will separate the Loconet circuit from the addional power.

This board also can be used to switch lights on your railroad setup.

It is to be considered, that max load of the printed circuit can not exceed 1Amp.

If more than 300 mA is to supplied by the circuit, the Fuse F1 has to be adapted.