Foreword 1:
This documentation has been created with:

Since there should be at least three Rocrail blocks in an oval, the oval was divided into four blocks:
- the two straight lines and
- the two arches.
Since the upper straight line is intersected by a switch, two small blocks were provided on the left side and one on the right side of the switch; these two blocks bk15 and bk16 are concatenated to one long virtual block bk1516v.

A short train can now travel using each block.
A long train can travel from the upper straight line to the right arch and to the bottom straight line. The left arch is then too short for a long train. To continue via the left arch to the upper straight line a manual route ist defined using a "via block" configuration. This documentation describes how to define this in Rocrail.
The colored tracks represent the sensors. The block lengths were calculated from the length between the sensors plus the length of the "enter" sensor (but without the "in" sensor).

The Rocrail blocks are shown in the first picture. Compact blocks are short and long blocks are long. They are arranged in a clockwise direction; the train always moves from the plus side into a block. This is not mandatory, but should be dealt with in this way in this documentation. 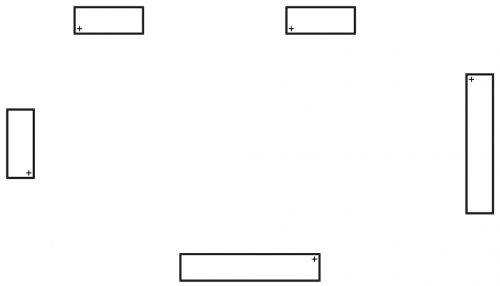 The Rocrail - sensors need an "identifier". It consists of the two letters "fb" (for the English word "feedback"), a two-digit number and a plus sign or a minus sign, depending on whether the sensor is arranged on the plus side of the block or on the minus side of the block. None of this is mandatory either, but should …

The Rocrail - switches require an "identifier". It consists of the two letters "sw" (for the English word "switch") and a two-digit consecutive number. This is … 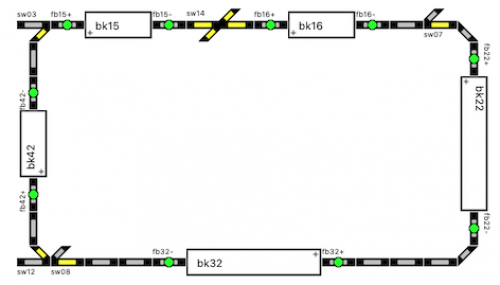 The Rocrail router assigns the sensors to the blocks and generates these block properties:

To allow a long train to stop on the upper straight line, a new "virtual block" is formed from the two blocks:
- bk1516v = bk15 and bk16
Rocrail outlines virtual blocks with dashed lines. Virtual blocks have to be created manually. While the Rocrail router can assist us with the configuration of sensors, signals, routes, commands for switches and signals, etc., all of this has to be configured manually for virtual blocks. 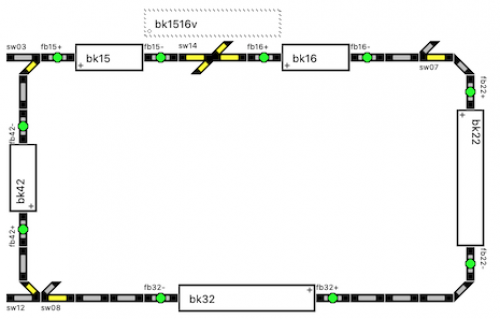 The orientation of the individual blocks that make up the virtual block is mandatory here! This and other important basic requirements can be found in the wiki at https://wiki.rocrail.net/doku.php?id=block-gen-en#virtual

The routes are now created manually for the long train. Just copy an existing route. Here is an easy task to start with:
from block "bk42" minus to the virtual block "bk1516v" plus just copy the route "[bk42-]-[bk15+]": 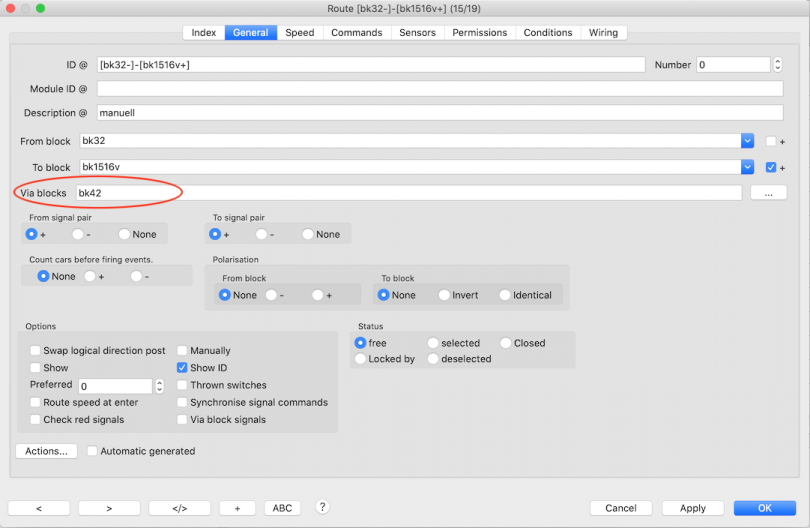 The list of commands for this route must be completed manually; the turnouts "sw08" and "sw12" must be entered.

Accordingly, all the required routes to and from the virtual block "bk1516v" have to be created both clockwise and counterclockwise which results in the following list of manual routes:

Starting from block bk32 what blocks can be reached clockwise? The existing routes are: 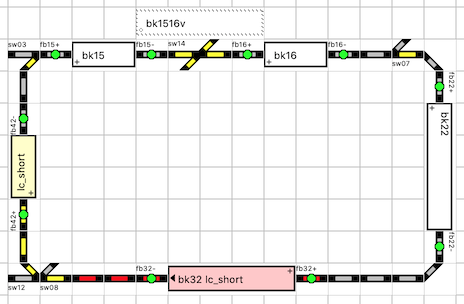 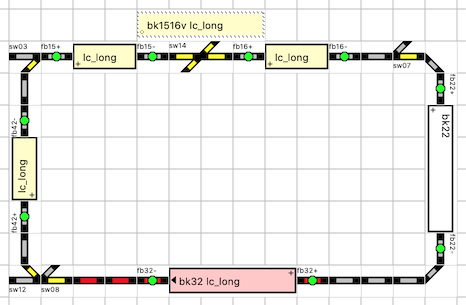 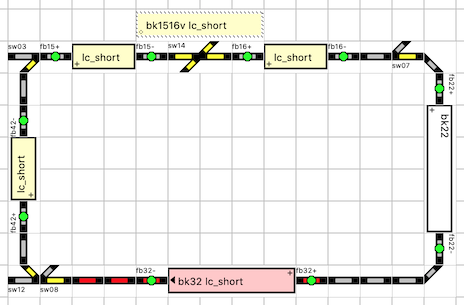 If this is not desired, just define conditions in the route to the virtual block, e.g. "Minimum train length" [millimeters] 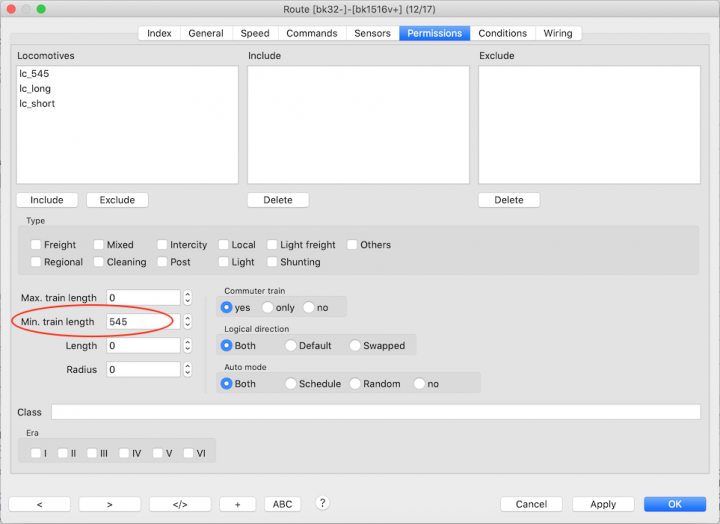 The value can be set like this:
- the train must be at least as long as the short block before the virtual block.
Since Rocrail provides a safety distance (min. Block - train length) (standard is 20 millimeters), this value is subtracted from the block length which results in: Minimum train length = 545 millimeters. 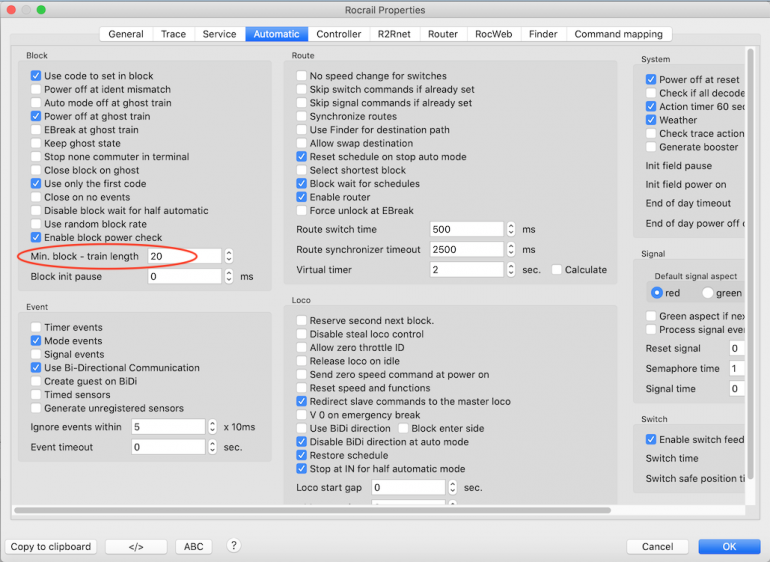 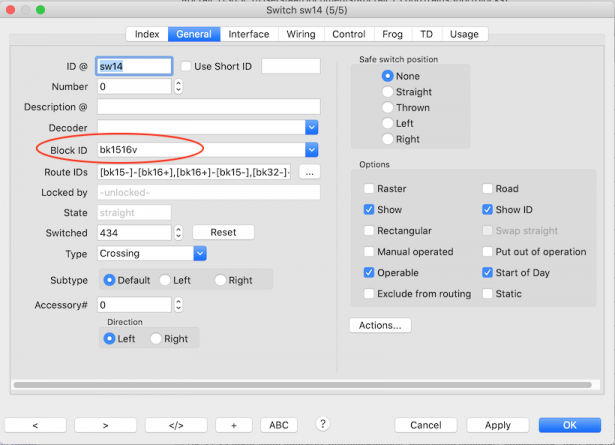 The switch is now marked in red when the virtual block is occupied. 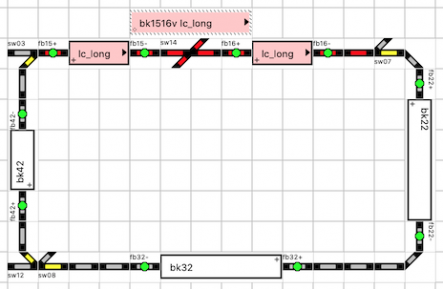 All tests have been done with this Rocrail workspace, whereby only the direction of travel from block "bk32" via block "bk42" to the virtual block "bk1516v" was examined and checked. Other driving options have not been checked and may contain discrepancies.