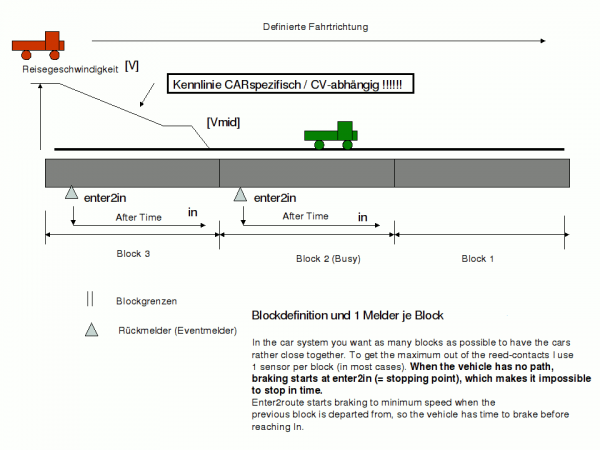 To achieve realistic traffic as many blocks as possible are used in order to get a short sequence of cars, thus a rather dense traffic. Therefore a relatively large number of sensors is necessary making it reasonable to use only one sensor per block to reduce costs. With enter2in and enter2route Rocrail offers two ways to achieve this:


The enter2in-sensor is a combination of a physical enter- and a virtual in-sensor. The physical sensor is placed at the beginning of a block causing the vehicle to slow down to Vmid in case the next block is occupied. After the event timer has elapsed the vehicle will stop. The distance between the physical sensor and the stopping point depends on vehicle speed, time set and breaking parameter of the respective vehicle. The stopping point thus will vary depending on vehicle and situation. Setting a shorter time between enter and in will increase accuracy but in many cases is not sufficient. The vehicle can stop too soon, in which case the next car can bump in to it, or it can stop to late so it is already at the crossing or bumps into the car in front. 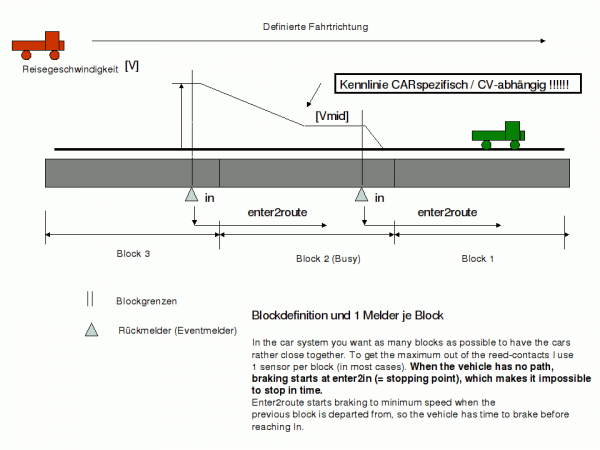 The enter2route-sensor is virtual only. The physical sensor is the in-sensor placed at the end of the block within close distance of the desired stopping point. The virtual enter is generated by the in-sensor of the previous block.
In that case the vehicle will start braking when in leaves the previous block, so it will have reached minimum speed before touching the in-sensor and will come to a stop very shortly after the in-sensor. The worst thing that can happen is that minimum speed is reached too early, which makes the car run at slow speed for some cm, but in practice this looks quite natural.