Sensors are a core component of every computer controlled model railway. By the sensors the positions of the trains on the layout are announced to the software. Sensors can either provide an impulse (e.g., switch rails, Reed contacts, hall sensors) or a permanent signal (e.g., contact rails, other occupancy detectors like current detectors etc.). An overview of the hardware and an introduction to the use of sensors is provided on the page Sensors.

In Rocrail sensors are defined as objects. The page Objects: Sensors and its sub pages inform about the setup of sensors.

> Note: To the avoidance of misunderstandings it should be noted that with the word "Sensor" physical (real, hardware-) sensors, as well as the corresponding software objects and events are called.

Rocrail needs two sensor events for every block which define when a train is entering the block and when it has (almost)1) reached the end of the block. These sensors are called as enter and in. When required additional sensors like pre2in, shortin etc. can be added.

The definition of the sensors occurs in the route properties of a block and depends on from which block the train comes. For all possible routes sensors have to be defined. Hence, before the definition of sensors in the block properties all routes must have been set up before.


As explained below in more detail the following general order of events takes place: enter→ (shortin) → (pre2in) → in. Events in brackets are optional.

For a correct functioning of the automatic mode at least the events enter and in have to be triggered in each block.

Note: Rev. 14.971+ automatically generates a missed In event with the Enter event in the To block.

In the following the different sensors are looked closer at. Besides, it is assumed that a train must stop in the respective block, e.g. because the waiting settings of the block are set accordingly, or because the following block is occupied. To the meaning of V_min and V_mid see Locomotives: Interface

Tip: Whether or not using BBT can be defined for each block individually. This decision has not to be made for the whole layout.

Note:
Since the event timers do not only affect enter2in and enter2pre but also in attention should be paid to the following:
If an enter2pre event is defined and this is, e. g., assigned to timer 1 the in event has to be assigned to the other timer (e. g. timer 2, usually with a short or no delay at all) to assure the in event is not delayed by the same time

The following table summarises the speeds as a function of the sensor events. Subsequently the velocity sequence in an example of one block with three sensors is shown graphically.

Note: According BlockDialog Details, Speed other speed indications may be configured.

Rocrail does not send every speed step to the decoder and therefore the decoder has to be programmed to get a smooth acceleration and deceleration.

Since the implementation of the Block Brake Timer (BBT) for blocks with only 2 sensors (enter and in without pre2in), finely adjusted Braking and Acceleration processes will be achieved.
With the BBT an existing pre2in sensor is ignored. Its possible further use as shortin sensor is not affected.

Blocks with only one sensor

Is in a block only one sensor realisable (e.g. the whole block is only one block occupancy section) nevertheless is it possible to get a satisfied stopping inside the block. Then the sensor should be configured as enter2in event and the in event will be generated from an event timer.
The CV configured brake delays or speedlines of all locos, that pass through the block, should not be too different. Otherwise is it possible, a loco achieved too early the Vmin speed and stops too far from the end of the block. For every train, that pass through the block, is neccessary that it is complete inside the block, if the timer controlled in event occurs.
* Caution: Heed warnings on timed events in the Event Table

In Rocrail sensor events are configured in the block route properties. For this purpose in the following order

In brackets are the relevant sections of the step-by-step tutorial given. In addition, the pages on sensors, routes and blocks should be regarded.

Using the same sensor in different blocks, for the same or different events, is strictly forbidden. This applies to all above mentioned events without exception. It is thus, as an example, not possible to use one enter sensor for two or more blocks.

No rule without exceptions


Different sensors in specific routes to the same block

If using specific routes for sensor events different sensors can be used to generate the same event (enter in the example) in the same block.

This is not an example for shared sensors; see above chapter!

The screenshot shows a small layout, it contains two routes from the main line block on the left to the main line block on the right, one route passes block local_1 and the other route passes block local_2. The two routes, although coming from the same start block, have different sensor entries for the enter event but use the same in sensor of main right. 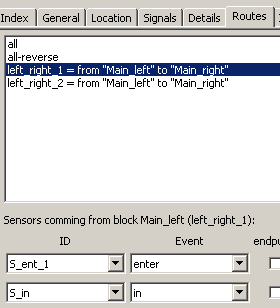 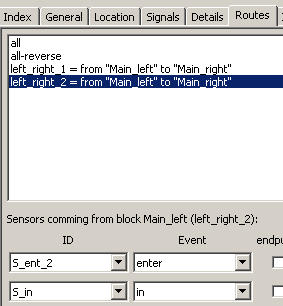