DCC++ is a Command Station based on the Arduino UNO/MEGA and a L298 Motor Shield.

Please consider that this is a real DIY project.
It is not supported by Rocrail nor GCA.
Just start with this modules if you are able to do some Arduino
programming yourself.

The DCC++ library in Rocrail is dccpp. 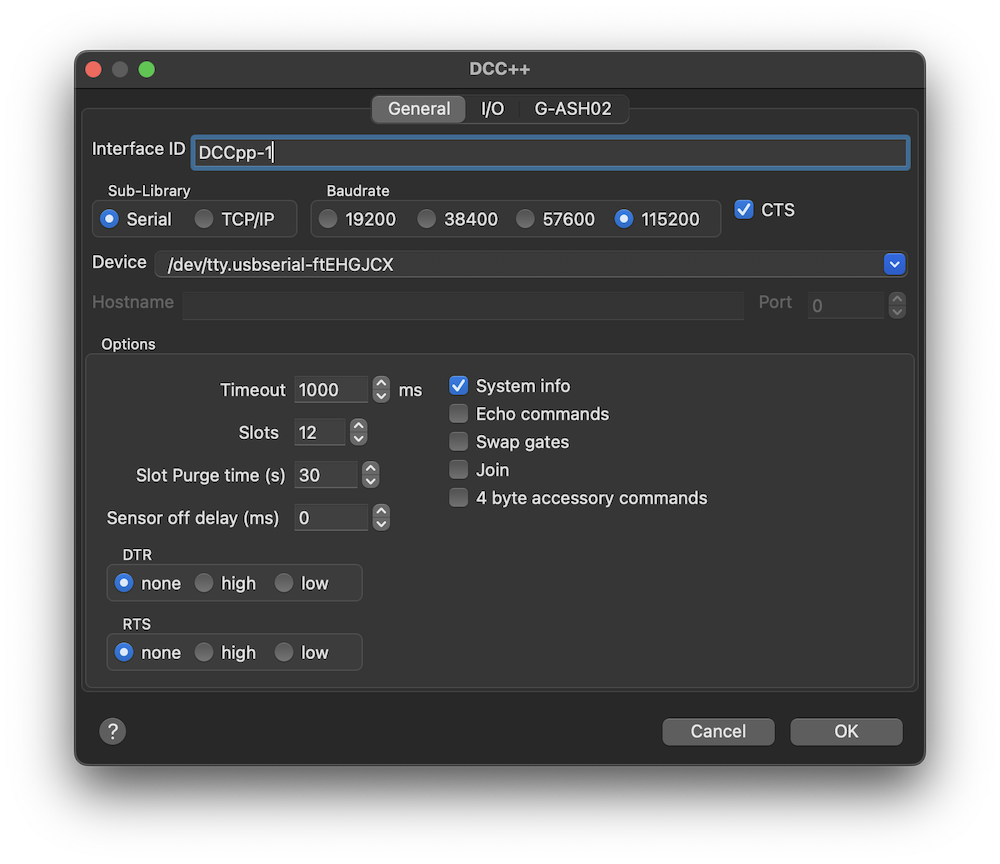 The baud rate is fixed at 115200.
The only thing to setup is to choose the right virtual serial port.

A TCP/IP connection can be used if the Arduino features an Ethernet Shield.
The TCP/IP Port is fixed at 2560.

The minimal idle time in seconds before a slot ist purged.

For pin 22..53 on the MEGA only.
Number of ms to wait before reporting an input as off. (The value should be a multiple of 10.)
The delay timer will be reset if an input gets high within this time.

Swap the turnout and straight commands.

Reduce the generated switch and output IDs to 16. (0…15) Default is 256.
This option allows usage of an Arduino Uno with more than 45 devices addressed on DCC.

Some Windows configurations will crash at Rocrail server startup if the following option is not set: 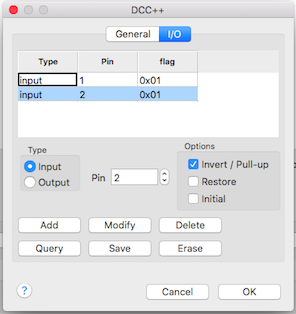 Add a new I/O as defined with Type/Pin/Options.
It will be temporary created in the DCC++ CS.

Modify the selected I/O with the Type/Pin/Options settings.
It will be temporary modified in the DCC++ CS.

Delete the selected I/O.
It will be temporary deleted in the DCC++ CS.

Query all defined I/O's in the DCC++ CS.

Save all defined I/O in EEPROM.

Erase all defined I/O from EEPROM.
A new query is automatically issued.

Usually no manual settings are required here. Rocrail automatically defines Arduino pins as input or output pins as soon as the pins of such a DCC++ CS are used for triggering sensors, turnouts or signals. For input pins, the option "Invert / Pull-up" is activated by default, i.e. the internal pull-up resistor is used.

Manual intervention is required, only in the case that other options than the default ones are to be used at startup. It is generally recommended that you first create all objects in the plan with the desired pins. Then Rocrail should be restarted and all commands of objects that use output pins should be executed once; because at startup all used input pins and, when executing a command, all output pins are created from Rocrail in the DCC++ CS temporarily. After that, all used pins are listed at "Query" and the options can be changed directly. At the end don't forget to save!

When changing the option "Invert / Pull-up", the following must also be observed: For outputs, the "Invert" setting here is only valid when starting Rocrail. To ensure that the outputs for turnouts or signals are always used inverted, the value in the field "Parameter" on the "Interface" tab of these objects must be set to "1".

DCC Accessory.
Switches are addressed by the MADA scheme with decoder address and port. (DCC)

Free Arduino pins can be used as sensor ports.

Outputs are addressed by the NMRA scheme with decoder address and port.

Free Arduino pins can be used as output ports.
To map the output for DCC the option "As switch" must be activated.

The accessory flag is used for Output commands.

Aspect number and Aspect Value can be used.
The aspect value represents a bit masks used for the four signal addresses.

I/O interface for the Arduino MEGA. 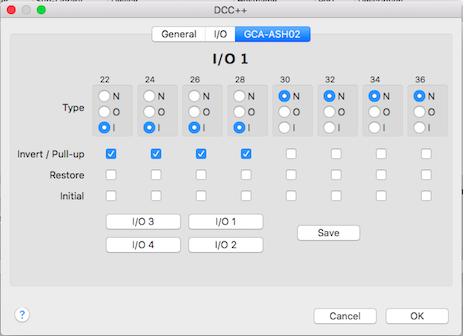 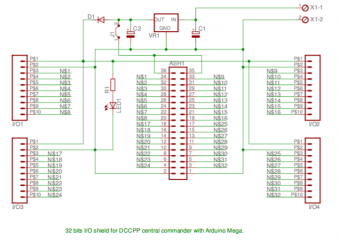 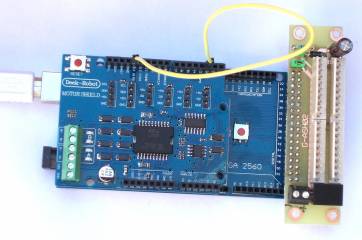 The rail power must be set to off before using the Programming Track.

Set the number of Decoder steps to 126 instead of 128 on the Interface tab of the loco properties.