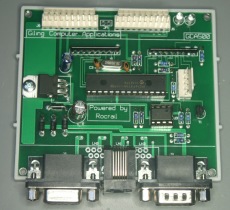 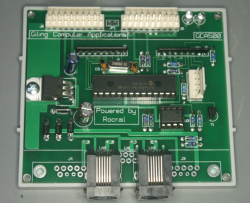 Unit is made on the same basics as GCA50

GCA50 was originally made for Modelspoor Groep Venlo (MGV) to be used for the modules of the large layout with K-rails from Märklin.
Because these modules were frequently be separated, transported and joined together on various shows, the choice was made to use
Sub-dconnectors instead of the mechanical rather weak RJ12 connectors.
Also because of the large amount of GCA50 units ( up to 90 !) the current in a RJ12 connector and cable was rather limited.
But more and more people prefer the use of RJ12 cable, so together with the creation of GCA51 for RFID, the GCA50 was created with RJ12 connectors, and called GCA500.
The pictures on top show the two options:

JP1 is used for reporting startup situation.
When GCA500 is powered up, it will report the logical situation of all ports which are configured as input.
When JP1 is set, this report will be aborted, which can be useful for some slow starting systems.
GCA85 or GCA101, together with Rocrail, will not have that restriction, so you can leave the jumper off.

Other differences between GCA50 and GCA500

ON GCA500 a serial resistor R14 in the lococNet communication line is added, to avoid damage in T1 , when wrong connections are made (cable faults).
R14 lowers the total current through T1 in order to keep it in good health.
The power regulator VR2(7805 TO-220) can also be replaced by VR1 (= R-78E5).
This switching regulator can handle up to 1 Amp constant current, with very low loss of energy in heating.
For larger setups with many units, this is preferable because it takes about 60% less load from the 12 Volt power supply.
Also, when one or two GCA107 boards are connected, and many relays continiously activated, the VR1 is needed.

Same as GCA51, the GCA500 is also useable to be fixed in a Littfinsky LDT-1 box.
These boxes are available from