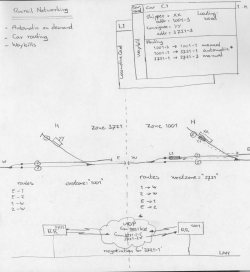 For supporting big modular layout meetings like Fremo organizes it is from logistic point of view not possible to put all modules into one Rocrail arrangement in time. So it would be better to manage all stations and yard by its own Rocrail server.
To be possible to run a train from one Rocrail domain to the other we need a network solution.

All Rocrail servers will get their own RRID for negotiate with others. The RRID could be a member club ID.
A domain has several connection points like modules have: Module Connections. If all domains are positioned the unresolved route points can be set to the appropriated RRID.

A club should hand out TCP/IP port numbers to prevent collusions on the Rocrail client service.
The negotiation could be done with the UDP technique to make the setup easier.

A copy of the train object will travel to other Rocrail domains, but it remains connected to its home domain by RRID.

A train object is a container for:

It is unique identified by RRID-LocoID.

The operator control dialog remains always in the home domain server and tracks all roaming movements of the train. This makes it possible to carry a mobile WLAN device around the meeting to control a train.

This dialog has following functionality: