OpenDCC is a DCC Command Station developed by Wolfgang Kufer. It is very well maintained and documented and is a real good alternative to one from the store.
OpenDCC can communicate with either the p50x or the XpressNet protocol.

The programming track is one of the best found in the DIY world and beats many commercial products.

This dialog is for setting up the OpenDCC Command Station. 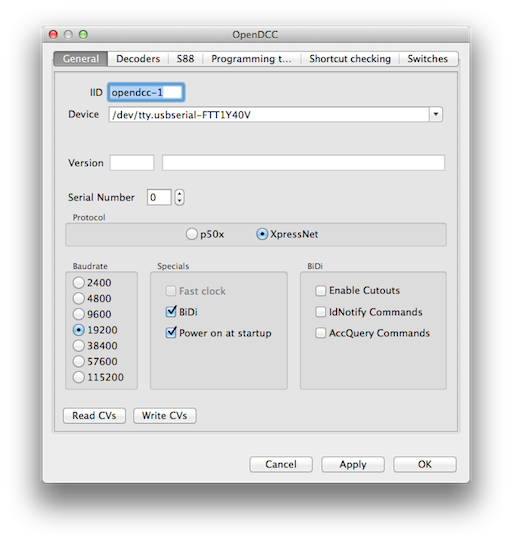 To open the dialog choose "File" → "Rocrail Properties…" → Tab "Controller" → Select the OpenDCC entry in the Controller list and push the Properties button.

After starting this dialog it is recommended to read all CV's supported by this dialog to show the current settings.

All modified settings, compared with the read ones, are written to the OpenDCC CS.
Make sure the right protocol is set before write because there are some differences in value interpretations.

Make sure the Firmware installed supports this feature otherwise a lot of communication errors will appear.