This is a brief explanation on building a timetable for your layout using the functions within Rocrail.

There are many references for real-world timetable building such as:

These are from my days as a supplier to public transport and mostly regional based eg trams, buses, light rail, metro etc.

The national railways in Europe often have their own terminologies.

To build a timetable one first needs to know the GEOGRAPHY of the area/subnetwork/division concerned.

This is simply to know: from where and to where and by what route do the trains (buses etc) travel?

This can be quite complex so here it will be kept very simple and per a train layout.

In this example trains go from A to D passing the stations B and C on the way and from D to A using the double main line.

A and D are regional (intercity) stations and all trains stop here.

B and C are local stations and only the stop trains stop here.

This is accomplished in Rocrail by setting the station block attributes.

The stations A, C and D can have trains passing and are defined as locations with multiple blocks.

From the geography the time and distance between the stop points (stations) is known. This is key information for setting up times and timetables.

In this example it is very simple. All distances are equal and all trains take about 10 mins between stations.

So the first setup can be made based on the required start of day, say at 6:30.

This information allows the setup of schedules and tours in Rocrail.

Schedules in Rocrail are lists of blocks or locations to form a routing a train can take to get from AA to BB.

In this example schedules for the LOCAL trains can be setup as follows:

However the requirement is also to include Express trains:

Xpress-a going the other way would be:

This information now allows the building of Tours in Rocrail.

A tour in Rocrail is a list of schedules that an assigned train will run when given that tour. Recently the tour has been given the option of running TIMED shcedules, which now allows the simple creation of timetables during an operating day.

In the above example train local-1 starts from A at 6:30. Meanwhile train local-a starts from D at 6:30 in the reverse direction. We know that the locals will get from A to D (D to A) in about 30 mins. With a turn-around time of 15 mins, this means each train can start the return schedule at about 7:15.

The tours are built as follows:

A recent feature now shows the schedule departure times in the tours page see below: 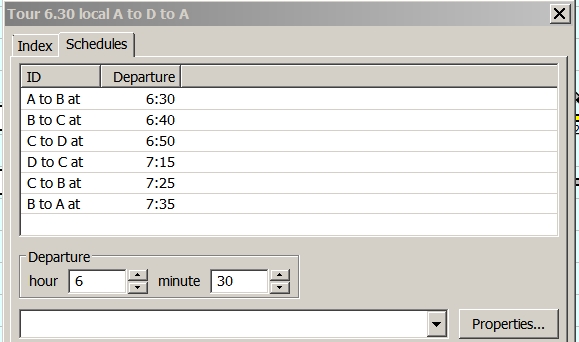 The great thing about the tours with departure times is that it is now extremely simple to add tours to the timetable by simply COPYING the tour (change it's name) and then changing the times of the schedules and VOILA a new tour for another train. See below, the 8.15 tour is a copy of the 6.00 tour. 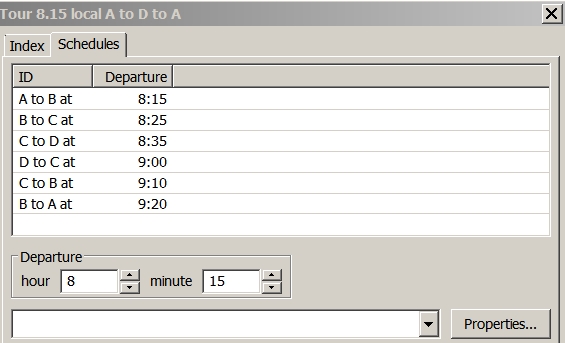 Tha above is a very simple case since in an actual situation there are multiple locals and express trains running back an forth to meet the requirment of a train every 15 mins or so.

In this simple case we can see conflicts if they might occur but before the days of computers this was impossible to see by just looking at tables of stops and times. A GRAPHICAL representation was needed to see if any conflicts in a timetable might occur. This is the so-called TIME and DISTANCE representation. I use such a program to set up my whole layout for a days operation.

Google for jtraingraph, this is a Java program (in German) to create time and distance graphics of a timetable. For our example above this would look like: 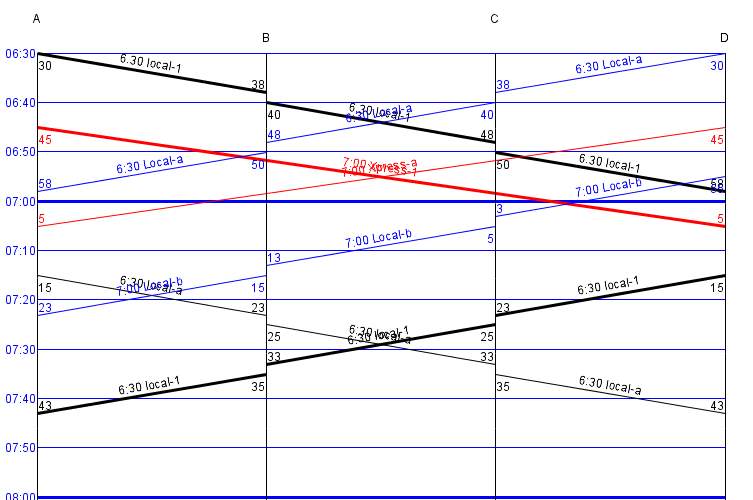 A time distance graph of the first few tours per our example.

With the above tools in Rocrail, with an understanding of the layout in question (Geography) and with the requirements (needs) for running trains, standard schedules can be built between stations/yards (stops) and then used many times in the creation of all the tours needed to allow the required trains to run, including the departure times from designated stops.—- In order to ASSIGN the tours to a train an action can be created using the time-of-day to GO with the required tour.—- EXAMPLE: 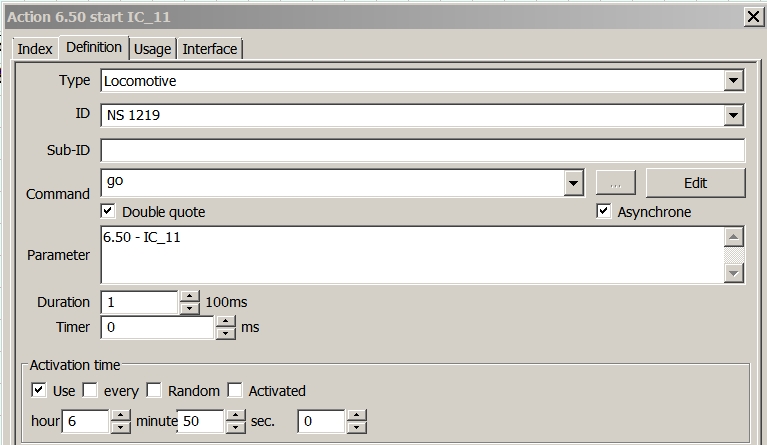 This is the essence of a public transport daily timetable.

Below the demo plan fully worked up for the first couple of hours of operation. notice some conflicts that needed adjustment: 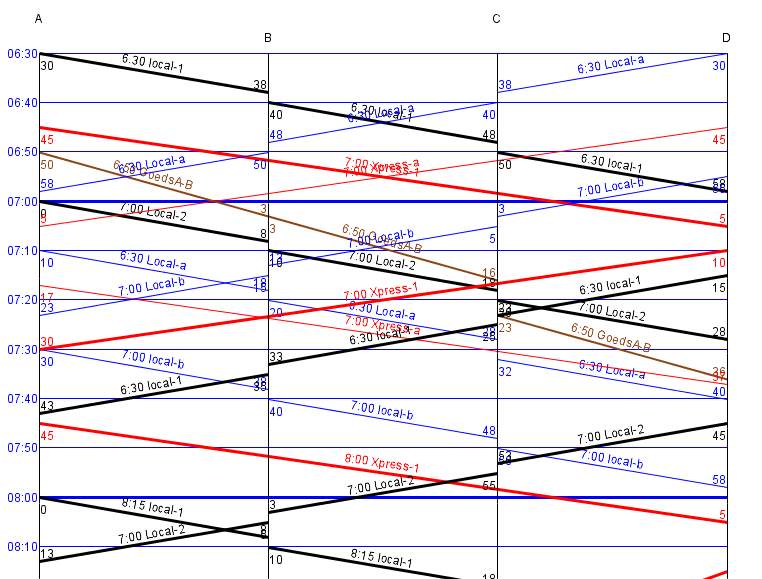 Example: There is a goods train (Brown) that leaves A (yard) at 6:50 (it travels slower than the passenger trains) and arrives C at 7:16.

There is another conflict that needed resolving, between local-a and Xpress-a, can you spot it?

NOTE: This (planned) passing would be difficult to realize using standard automatic operation.

This concludes this topic.