The IntelliBox Basic, II and USB-LocoNet Interface support the LocoNet protocol over USB.

In order to display loco velocity changes by means of the IB throttles correctly in Rocview option Allow zero throttleID has to be activated. 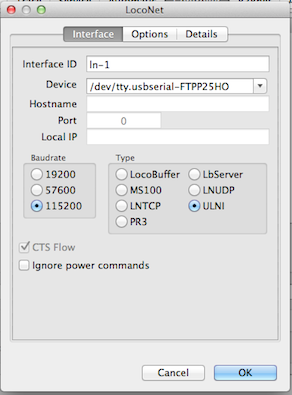 On tab Interface the ID NEW is overwritten by an appropriate name, e. g. IB in the example. The computer interface determined beforehand is entered into the field Device, e. g. com1 in the example. The baud rate is selected according to the one of the device (standard: 115200). The Type has to be ULNI.

Rocrail determine under Windows the available serial ports currently only to Com10.
If the LocoNet Com port in the dropdown list "device" is missing, the actually assigned com port must be read up in the Windows system control and be entered manually into the field "device". 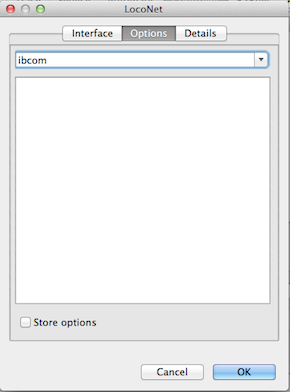 Set the CS Type: intellibox or ibcom for functions support > 8.
On tab Options there are no adjustments available for the IB. The options tab is only for Digitrax.

Note:
For the IBCom, the IB-Basic and the IB II, the value "ibcom" in the options-dialog has to be set. Otherwise, programming of decoders in Rocrail will not work (Programming Track). 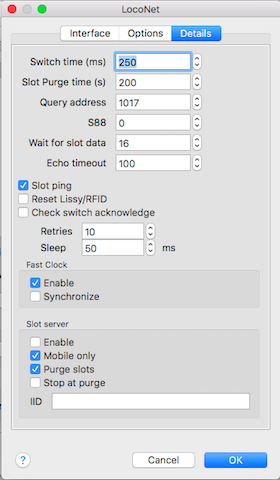 The Switch Time should be set to the maximum switch time of the IB (see also the description of Switch acknowledge below).

Locomotives not in use will be purged from the refresh cycle after a time specified in the Intellibox (default two minutes). The value entered into the field Slot Purge time on tab Details should be equal or slightly lower than the purge time of the Intellibox, e.g. 110 seconds.

Note: If the Slot Purge time is set to zero, the IB is supposed not to purge! This will lead to unpredictable situations: Rocrail will not check with the IB if the known slot is purged.

Very small purge time values will cause unnecessary traffic for checking the slots.
Locos that were controlled by Rocrail and were afterwards parked remain active if the option Slot Ping is active. If such a loco is selected on the Intellibox a warning will be shown telling the loco is already under control.

The option Slot Ping can be used to inhibit purging by pinging the slot right before it would be purged.

This value can be increased step by step up to max. 128 if the following error occurs:

Default Rocrail will read up to 16 packets until it give up waiting for a free slot.

The default time is 100 x 10ms to wait for the echo of a command.
Under some conditions, this may be too short and can be gradually increased to a maximum of 1000 x 10ms.

The option "Check switch acknowledge" can be enabled to prevent sending a switch command to the IB while it is busy executing a previous switch command.

Number of attempts to set the switch and receive an acknowledgement plus pause between retries.
It is recommended to set the sleep time to higher values (250ms maximum).

The Slot Server must be disabled! This will conflict with the IB and could lead to a Rocrail server crash.

The standard query address for getting the current sensor state is 1017.
For Uhlenbrock sensor modules this must be set to 1016.

See Addressing and Timing on how to address accessory decoders and how to set up switch and route switch times etc.

The installation is carried out as described in the operating instructions enclosed with the unit.

Important: First install the driver, then connect the unit to the computer via USB! The driver can also be found on the Uhlenbrock homepage or may be downloaded directly from the manufacturer Silicon Labs (Silabs): https://www.silabs.com/developers/usb-to-uart-bridge-vcp-drivers.

Afterwards determine under which com port the device is addressed using the Windows device manager. Often it is listed as com3:.

Under Debian, the interface is recognised as CP2102/CP2109 UART Bridge Controller [CP210x family]. To check, start the computer without the device plugged in. After the computer has started, connect the device via USB and open a terminal.

executed in the terminal results in the following output (example):

More detailed information is provided by

Debian 10 recognises the interface and assigns it to the device /dev/ttyUSBx. In this example /dev/ttyUSB0 (last line of the output):

With other distributions the interface identifier could be different, e.g. /dev/ttyAMAx, so for example /dev/ttyAMA0.

Note that the interface is usually assigned to the dialout group.

Users who want to use the interface must be added to the dialout group. See Serial device user access (Linux).

The Mac OS X needs to install an extra driver for this interface which can be downloaded from Silicon Labs:
https://www.silabs.com/developers/usb-to-uart-bridge-vcp-drivers

After reboot the Uhlenbrock interface is recognized as:

If this adapter is used with an older Intellibox or TwinCenter (devices without USB connection) it may be necessary to register the adapter by once calling the menu of the command station
Basic Settings → LocoNet Prog. → Art.-Nr.: <63120> → Modul adr: <1> → LNCV: 0= 1 and confirm these values.
Values in angle brackets <> have to be entered as shown.

Maximum Switch time; default setting is 5 secs. Using the OpenDCC signaldecoder and loconet, set the value to 0 to get a sufficient fast response of the signal patterns.

With the LocoNet type ULNI the factory settings of the interface must be used: 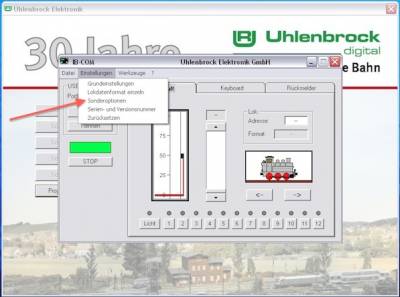 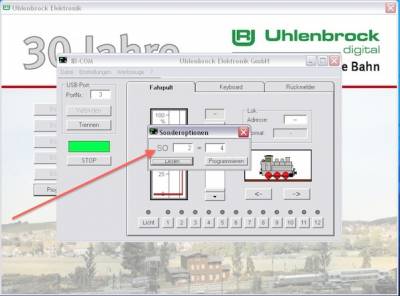 LocoNet direct mode has to be switched off!
Since the software handshake itself requires part of the bandwidth available the highest possible baud rate (115200) should be used in order not to slow down communication speed.

In order to display loco velocity changes by means of the IB throttles correctly in Rocview option Allow zero throttleID has to be activated.

Unexpected in LocoNet communication as is published in the LocoNet Personal Edition 1.0 are following:

The IB-Com does NOT refresh the loco commands on the track in case of mixed DCC and Motorola type of decoders.
This will result in a loco stop after a bad contact, depending of decoder manufacturer, and not starting for a long time until a slot ping is issued by Rocrail.
This problem cannot be solved without some advice from the manufacturer Uhlenbrock. Some undocumented LocoNet commands seems to solve this behaviour.