Setup for the Intellibox-I 'Classic', 65000, and other Intelliboxes with RS232 interface

By default the Intellibox (IB) is connected to the computer using a RS232 cable. If the computer is not equipped with a serial port an USB-to-serial adaptor can be used. See also Cable Assembly at the end of this page.

Tip: Alternatively, the IB can be connected to a computer using the LocoNet connector and a separate LocoNet adaptor. This connection offers some advantages over the RS232 connection. See Spontaneous Resets for more information on this matter.

In order to display loco velocity changes by means of the IB throttles correctly in Rocview option Allow Zero Throttle ID has to be activated.

After completing the set-up special attention should be paid to the paragraphs Fine Tuning and Switch Times.

Setting up the IB

In basic setup go to "Interface" and then select:

In basic setup go to "Interface" and then select:

"IB only" does not work! 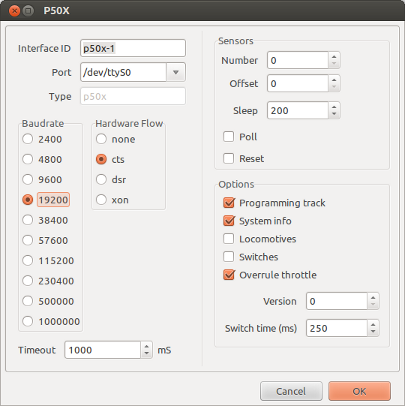 The Interface ID "NEW" is overwritten by an appropriate name, e. g. IB in the example. The computer interface determined beforehand is entered into the field Device, e. g. "com1" in the example.

This value is used as timeout on serial communication like waiting for the CTS line.

Hardware Flow has to be CTS

The poll checkbox should be left unchecked for better performance. This is a work around for Tams Easy Control.
The Poll option starts reading sensors in the p50 way, Märklin 6050/6051, which is not needed for the IB because it provides 'events' for this.

Force if set, then the XLok command is 'forced' even in case of a Lok already controlled by a non-PC device.

The IB can be set up for LocoNet via the RS232 (serial) port. The IB then behaves like a LocoBuffer.


Setting up the IB


On tab Interface the ID NEW is overwritten by an appropriate name, e. g. IB in the example. The computer interface determined beforehand is entered into the field Device, e. g. com1 in the example. The baud rate is set to 19200. The Type has to be LocoBuffer and CTS Flow has to be enabled.

On tab Options there are no adjustments available for the Intellibox.

On tab Details the only option relevant is Slot Purge time: Locomotives not in use will be purged after a time specified in the Intellibox. The option Slot Ping can be used to inhibit purging. The value entered into the field Slot Purge time should be equal or slightly lower than the purge time of the Intellibox.

A value of zero, the CS is supposed not to purge, will lead to unpredictable situations: Rocrail will not check with the CS if the known slot is purged. Very small purge time values will cause unnecessary traffic for checking the slots.

Note: Locos that were controlled by Rocrail and were afterwards parked remain active if the option Slot Ping is active. If such a loco is selected on the Intellibox a warning will be shown telling the loco is already under control.

Set the number of connected S88 modules to get the sensor status at StartOfDay.

If FIFO and other problems occur in auto-mode it should be considered to use the following special options of the IB.

Keep in mind, to change only one setting at a time, test and validate, before changing another.

To access the highest transfer rate (38400bps) of the IB, which is not available in the options' menu, change SO#1=4.

SO#25 and SO#907 define the idle signal sent if no loco is active or in the refresh cycle. The factory settings are (depending on the country where the IB was purchased): SO#25=0 and SO#907=1.


A combination of SO#25=3 and SO#907=5 may cause problems with certain mobile and / or accessory decoders under certain conditions: Sometimes commands are received delayed or not at all. Generally sending both DCC and Motorola idle signals is not necessary even in a mixed DCC/Motorola environment.
In a mixed environment normally a combination of e. g. SO#25=2 and SO#907=1 can be used.

Note: If, from the IB menu, a protocol different from the standard protocol is assigned to a single loco the special options may be set automatically to SO#25=3 and SO#907=5!

To increase stability on Rocrail connecting with IB, esp. when using the actual release, consider to change Special Option 26 from 1 to 0.
SO#26=1 forces Long RS-232 break to result in fallback to initial 2400bps, this may happen during p50x-module startup, resulting in a potential loss of communication, while SO#26=0 results in remaining speed unchanged.

If no I²C devices, like Märklin keyboards or so, are connected to the IB, changing SO#33=0 will reduce internal overhead of IB.
SO#33=1 default echo of turn out commands on the I²C-bus.

The old IB is known to sometimes performing spontaneous unwanted resets under certain circumstances in certain environments. Even though this matter was widely discussed for many years on various forums on the internet a clear reason was never detected. The only point clear is the IB almost never performs unwanted resets while no connection to a computer is established.

To minimize the occurrence of unwanted resets a good (and continuous!) shielding of the interface cable from the computer to the IB should be ensured. Further on, transformers, monitors and other sources of interference should be kept away from the IB. Another aspect is to avoid an overstress of the IB due to many commands being sent within a short period of time.

An elegant alternative to avoid unwanted resets totally is not to use the serial (RS232) connection of the IB at all. Of course this does not mean to stay without Rocrail!

Since the IB is a LocoNet device it can be controlled in total via the LocoNet. Commands from the computer or Rocrail, respectively, have to be transferred to the LocoNet first and from the LocoNet to the IB in a second step. Several adapters are available for this purpose: These are, among others, the GCA85 (RS232), the GCA101 (Ethernet), the LocoBuffer, the LocoBuffer from RR-Cirkits and the USB-LocoNet-Interface by Uhlenbrock. 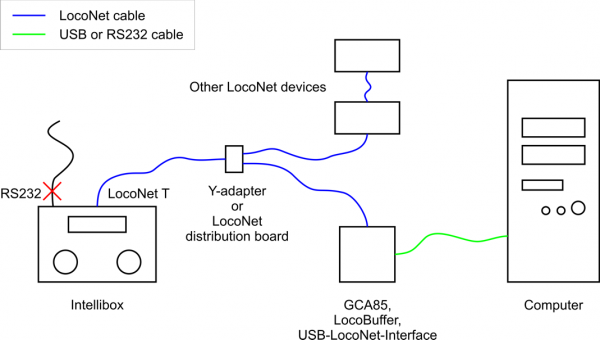 The IB, the USB-LocoNet adapter and the computer can be connected according to the above scheme. The serial (RS232) interface cable is not needed anymore and should be removed. Moreover, the serial interface can be switched off from the IB menu.

Tip: LocoNet cables can be assembled easily, well-priced and in the desired length by oneself: LocoNet Wiring

The IB itself does not need to be configured. Configuring the Special Options mentioned in section Set-Up for LocoNet via RS232 is not required, too.

From the menu File → Rocrail properties… is selected and in the following dialogue tab Controller is selected. The original configuration of the IB - if existent - is deleted. Afterwards from the drop down field New the command station loconet is selected and subsequently added by pressing Add. The command station NEW - loconet is highlighted and Properties is pressed. The dialogue LocoNet Interface opens. The name (Interface ID) should be exactly the same as the one used before, if applicable. This ensures the Interface ID does not need to be exchanged in all locos, switches, signals and so on if the ID was entered there.

Note: Only the interface (the adapter) is configured. The IB becomes part of the LocoNet and thus does not need any special configuration.

If the IB is configured as described above, the PT button in Rocrail doesn't work anymore. The programming track is switched on automatically during the first programming operation (read/write).

Addressing accessory decoders is preferably done using PADA-Addressing as in this case the switch (or signal etc.) address matches with the address on the Intellibox without the need to convert.
The IB-Address of, e.g., a switch is entered into the port field, while the address field stays at 0 (zero). See above link for details on addressing schemes.

The switch times of switches and other accessories can be set up from the IB menu:

The effective switch times depend on these settings of the IB, not on the settings in the Rocrail Configuration: To a single switch command the maximum switch time applies, if multiple commands are sent in series the minimum switch times applies. The IB executes the commands one after the other; too many commands within a short period of time can overcharge the IB and the accessory decoders, respectively. An overcharge may result in dropped commands, not detected sensor activation and so on.

Many commands within a short period of time may lead to complications resulting in error messages or sometimes "fifo buffer full". The latter is often caused by accessory decoders not able to handle multiple commands in a sequence.

It is therefore generally recommended to reduce the number of commands and to icrease the interval of outgoing commands. The following settings in Rocrail can be used to acchieve this: 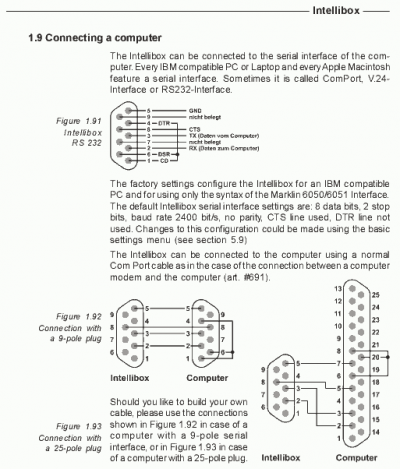 1)
Empiric values. Shorter times may be used if found to be reliable. If switches and other accessories are sometimes not set correctly in auto mode the minimum values should be regarded or even extended.
2) , 4)
for Intellibox 1 only
3)
Has to be checked with IB max. = IB min. (Intellibox 1 only)
intellibox-en.txt · Last modified: 2020/03/03 18:39 by besra