This is an binary Open Source protocol intended for communication between two or more, in a peer to peer network, hardware units.
Software stubs will be made available in C. The C source can, partly, also be used as base for embeded software. (PIC/Atmel)

Work in progress, can change any moment, open for any comment, advice and help. 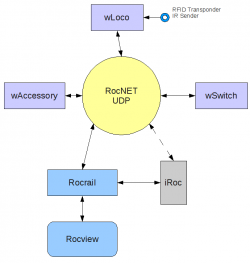 All should have their own unique ID which is used as sender/receipient parameter in the header.
The unit who is processing all messages and sends a lot of them can be entitled to be the master of the network, but in fact it is only a player in the game. So in the case of Rocrail the computer running this software could be seen as the master.

RocNET has a dedicated node for setting up the communication:

Only UDP is supported.
Default settings:

To group units in a large system. Leave zero if there is only one active network.

The ID of the sender unit. Rocrail Server default ID is 1.
A value of "0" means undefined.

Zero is for all networks.


The address is optional and can be used to point at a single booster.


¹) Leave unchanged if bit 7 is not set in this byte.
²) Lights if F-Group = 0.
³) Alternatively the velocity can be send with only one byte in which bit 7 controls the direction and the velocity range ist 0…127.

Direction and lights are left unchanged because bit 7 of both bytes are not set.

¹) All connected stationary decoders should report status if receipient is set to zero.

¹) Address of the reporting loco.
The sensor ID is set in the header; Sender.