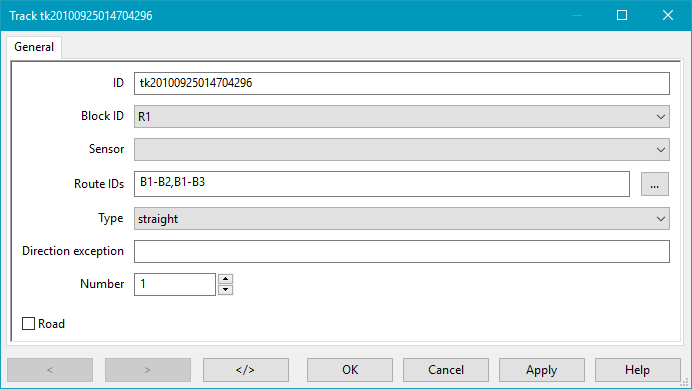 Note: The 'Index' tab can only be opened via Menu → Tables - Tracks… .

A sensor must be set visible to be able to set the track occupied.

) indicates the active route by the route representation

or, if no route symbol is found, the occupied symbol

.
This is a list of comma separated Route IDs without white space (blanks). If one of the IDs has become locked the route representation will be shown.
With the […] button a list of Route IDs can be selected.

In combination with the Direction symbol, the listed (CSV) source blocks may ignore the given direction.
This will be used by the Router to create routes in a forbidden direction.
The Symbol in the track layout will be marked with a capitol character E.

where the SVG file name must contain the number instead of the #.
The Accessories theme and/or User themes that contain the desired SVG files, must as SVG themes activated.

For connectors, the number is not selecting a symbol (the type is fixed), but specifies an identifier.

For this and more details see: Track plan Router

Use a symbol from the Road Theme.

1)
Name used in the 'Add item' menu, see Edit a Track Diagram
2)
all symbols on the track plan can be rotated 90°-wise using the menu or the Alt-R hot key: