How to handle a Terminal Station?

This wiki post originated from a request for a solution with Rocrail.

The facts: Simplified, there is an oval with two opposite trains and a siding.

Rocrail offers the possibility to use a sensor for the event "SHORTIN" in addition to the events for "enter" and "in". This "shortin" sensor takes over the function of the "in" sensor, if this has been configured accordingly in the properties of the locomotive:
- Locomotive / Properties / Details / "Use shortin event" = YES
The "shortin" sensor is placed directly behind the "enter" sensor.

If the locomotive drives to the terminal station in front of the train, the "SHORTIN" sensor has no meaning. The locomotive travels to the "IN" sensor and stops there.
- Locomotive / Properties / Details / "Use shortin event" = NO (default) 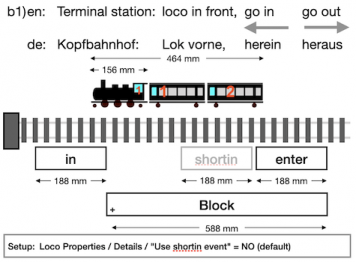 If the locomotive pushes the train into the station, the "SHORTIN" sensor takes over the "IN" event if the locomotive has been configured accordingly!
- Locomotive / Properties / Details / "Use shortin event" = YES !!! 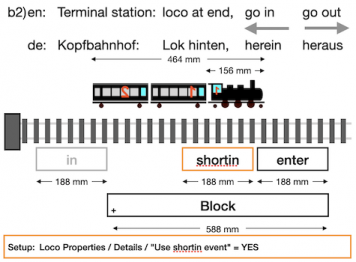 In this example, the sensors are to be implemented as current sensors. Only the locomotive triggers these sensors!
The length of a sensor should be as long as the locomotive needs to come to a complete stop within the sensor (i.e. does not drive beyond the sensor ! ). 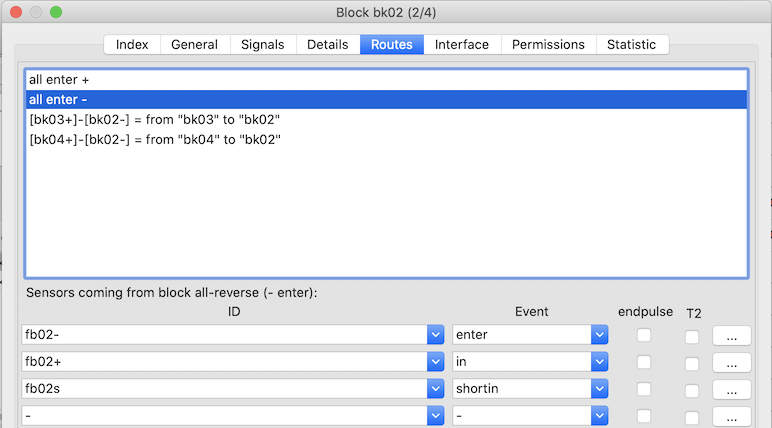 The locomotives have to be configured as follows: